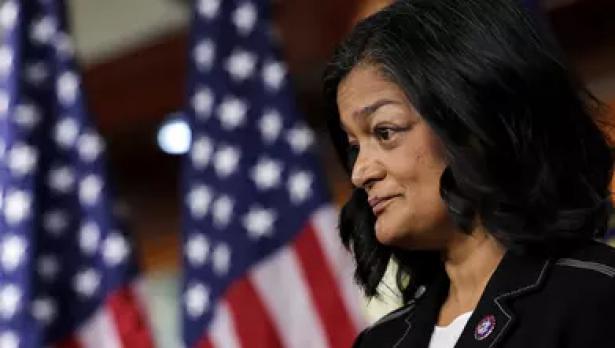 "We are at a precipice and we're counting on the American people to come through—and I have hope that people will realize that we have to turn this clock back."

That's what U.S. Rep. Pramila Jayapal (D-Wash.), chair of the Congressional Progressive Caucus, told MSNBC's Ali Velshi Saturday in an interview about how rhetoric from former President Donald Trump and his political allies—including their "Big Lie" that the 2020 presidential election was stolen by Democrats—connects to threats against both American democracy and individual lawmakers, including her.

The interview came just two days after Jayapal released audio of some threatening voicemails she has received and The Washington Post published a detailed account of her experience on July 9, when an armed man who lives just seven blocks away yelled obscenities outside her Seattle home. According to the newspaper, Brett Forsell's pistol was seized by police and he is now out on bail.

"This is not normal. We should not accept it as normal," Jayapal said after Velshi aired some of the messages. "Where the hell are we as a country when this is becoming normalized? And so that's part of the reason I did the story and that I released some of the voicemails—those are just a fraction of what we've received, along with death threats and many other things."

"I think it's important that people understand the connections between the Big Lie, January 6th, and what happened at my house, and see how these things are affecting each of us individually and then all of us as a society," she continued, referencing when a pro-Trump mob stormed the U.S. Capitol last year. "I wanted people to be aware of what we're dealing with so that we can reject it and say we gotta put whatever has been unleashed back away and not allow this to be normal."

Asked by Velshi how her experience with threats of violence has changed over the years, Jayapal responded that "it's completely different over the last… four to five years—really since Donald Trump was in the White House and actually allowing and promoting this kind of violence and political rhetoric, racism, and sexism."

Citing her own experiences at protests, she stressed that "there's a big difference between protesting peacefully—free speech peacefully—and showing up for harassment with a gun at somebody's house in the middle of the night, constantly coming by and yelling racist, sexist, xenophobic things."

"I think that what has changed is there's a sense that everything is so unfair and it's been propelled by Donald Trump—the institutions are unfair—that the only recourse is to violence, and that is an extremely dangerous thing and we saw it come to fruition on January 6th, and now in ways that… I've seen outside my door, " she added. "It is particularly bad if you're a woman of color."

The pair discussed some recent actions by Trump-friendly politicians—including a June advertisement by Eric Greitens, who lost the Republican primary race for a U.S. Senate seat in Missouri, about hunting "RINOs," or "Republicans in name only."

Jayapal called it "absolutely terrifying" and acknowledged some of what's faced by Republicans like Reps. Adam Kinzinger (Ill.) and Liz Cheney (Wyo.), the only two members of the House select committee investigating the Capitol attack. Kinzinger is not running for reelection in November and Cheney lost her primary contest against a Trump-backed candidate.

"I find Sen. Graham's comments stunning—a sitting U.S. senator essentially calling for riots in the street," said Jayapal. "This is a very Trumpian, MAGA tactic: When you are being threatened with justice, that you call for riots or violence. That is what led to January 6th."

"MAGA," or "Make America Great Again," was a Trump slogan for the 2016 presidential race.

"We're in a very dangerous place… and I think it is important that we understand what's at stake," Jayapal said about two months out from the midterm elections. "It's important that we vote for people who do not subscribe to the Big Lie, whether Republican or Democrat—that we vote for people who are going to protect our institutions of democracy."

FiveThirtyEight on Tuesday published an analysis revealing that among the Republican nominees for the U.S. House and Senate as well as governor, secretary of state, and attorney general on the ballot in November, 195 are 2020 election deniers, 61 are "doubters," and 115 did not have a discernible position and declined to clarify.

Jayapal expressed hope for the future, highlighting that some Trump-endorsed candidates—such as Sarah Palin, who just lost a special election in Alaska for an open U.S. House seat—are being rejected by voters.

Pointing out that Kansas voters last month opposed a measure that would have paved the way for an abortion ban in the state in the wake of the right-wing U.S. Supreme Court reversing Roe v. Wade, Jayapal argued that "we are seeing a rejection of the extreme MAGA positions across the country."

"I think Americans will reject this," she said. "We have to make it clear what the stakes are and we have to talk about what Democrats have done—the remarkable things that we have been able to accomplish with very small majorities."

"All of that is important, but we do need to lay out what is at stake for our democracy and I think the January 6th committee is also doing that and the Justice Department with the raid at Mar-a-Lago and all of the things that we are finding out about nuclear secrets, other things that would've been unimaginable even five years ago," the congresswoman continued.

Jayapal's comments came after President Joe Biden, in a prime-time speech earlier this month, warned Americans about how MAGA Republicans and Trump—who's expected to run for president in 2024, despite being the target of multiple legal probes—threaten U.S. democracy.

We've had enough. The 1% own and operate the corporate media. They are doing everything they can to defend the status quo, squash dissent and protect the wealthy and the powerful. The Common Dreams media model is different. We cover the news that matters to the 99%. Our mission? To inform. To inspire. To ignite change for the common good. How? Nonprofit. Independent. Reader-supported. Free to read. Free to republish. Free to share. With no advertising. No paywalls. No selling of your data. Thousands of small donations fund our newsroom and allow us to continue publishing. Can you chip in? We can't do it without you. Thank you.  DONATE NOW