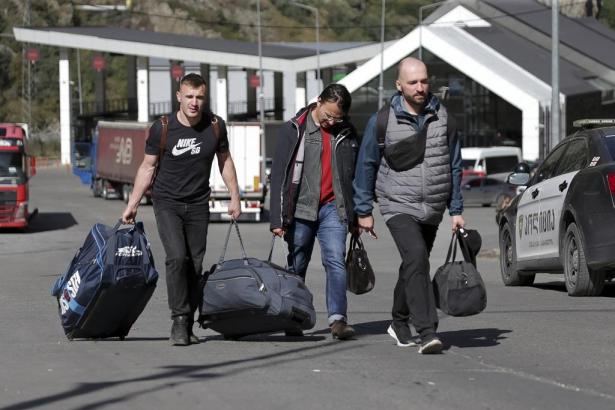 Russian men carry their luggage after crossing the border at Verkhny Lars between Georgia and Russia, September 27, 2022, in Georgia.,Zurab Tsertsvadze/AP Photo // The American Prospect

It’s been less than a week since Vladimir Putin announced he was calling up 300,000 fellow Russians to fight his war in Ukraine, but on Monday, just five days after his speech, the independent newspaper Novaya Gazeta, citing government sources, reported that 261,000 Russian men had fled the country. Today’s New York Times reports that the line of cars at Russia’s border with Georgia stretches 12.5 miles.

Credit where credit is due: Putin has accomplished in less than a week what it took years for Presidents Lyndon Johnson and Richard Nixon to do—drive young men across the border (in that case, Canadian) rather than fight an immoral and failing war.

It’s too early to pronounce Ukraine to be Russia’s Vietnam, not least because Afghanistan was already, at least in part, Russia’s (well, the Soviet Union’s) Vietnam. But far more than Brezhnev’s Afghan Adventure, Putin’s Ukrainian war has outraged public opinion across the planet and, apparently, now that he’s instituted conscription, within Russia’s borders as well. (The fact that Ukraine is virtually European and its residents overwhelmingly white—as Afghanistan and Afghans were not—factors into that.) Neither is it yet clear that Russia will eventually be forced to withdraw from Ukraine, as the U.S. was from Vietnam.

Nonetheless, Russia is now going through something that Americans of a certain age—most particularly, those who were draft-age men in the years 1965 to 1972—should remember well. I was one of them, and I certainly do.

In some particulars, Russia’s turn to conscription echoes ours. Putin has made clear that he’s not calling up the young male techies and professionals whom he clearly doesn’t wish to estrange (or lose to cross-border flight)—much as the U.S., during the Vietnam years, extended 2-S draft deferments to college students. That only tends to increase the anger, then as now, of the young men and their families excluded from the elite’s immunity to war (in our nation, a phenomenon dating back to the Civil War, when a $300 payment to the government bought you out of having to serve).

Putin’s draft also echoes instances in Russia’s not-all-that-distant czarist past—most especially, using the draft to afflict the groups viewed as the regime’s current or potential enemies, and the groups with the least power to resist. Today’s Russian conscription has landed most heavily on the nation’s non-urban, non-Russian minorities, as well as on men arrested for protesting the war. Such was also the case in Czar Nicholas’s 1904-1905 war against Japan, in which the draft was particularly aimed at the nation’s least politically powerful population: the Jews, whose rate of border-crossing (in most cases, all the way to Ellis Island) accelerated correspondingly. In 1905, the combination of the draft, the high death rate, and the defeat at Japan’s hands contributed to that year’s revolution—something that Putin assumes his control of state media and his neo-Cossack security forces will render impossible.

In the Vietnam-era U.S., relatively few war opponents or reluctants actually had to cross over to Canada. The 2-S was just one of a raft of deferment possibilities, and an entire cottage industry of draft counselors, attorneys, and the occasional physician arose to keep young men far from Vietnam. We were, as Russia emphatically is not, a liberal society, deliberately pocked with loopholes that gave legal outs to those who could afford them. That made conscription largely economic—and it became much more economic when the massive opposition to the war convinced policymakers (Nixon in particular) to shift the armed forces to an all-volunteer basis. Just how economic our de facto but not de jure conscription currently has become was made clear in a congressional hearing last week, when the Army noted that it’s falling far short of its enlistment quotas due to a record number of private-sector job openings and the wage increases that the labor shortage has compelled employers to adopt.

For those of us who both opposed and sought to evade fighting in the Vietnam War, the current flight and anti-war stance of young Russian men inevitably brings back memories. At the turn of the millennium, when I worked for the L.A. Weekly, I used the occasion of that supposedly landmark new year’s passage to write about the one New Year’s Eve (1971-1972) when my college roommate and I managed to get out of the draft, which loomed over us more than it did most. Here’s a link to that piece, which I include along with my hope that my newfound Russian counterparts—if need be, in the millions—make it across the border.

[Harold Meyerson is editor at large of The American Prospect.]