Poor People Will Be Voting for Their Lives in the Midterms

New poverty data reveals the effectiveness of pandemic aid programs that are now expired. For poor Americans, building on that success is a matter of life and death. 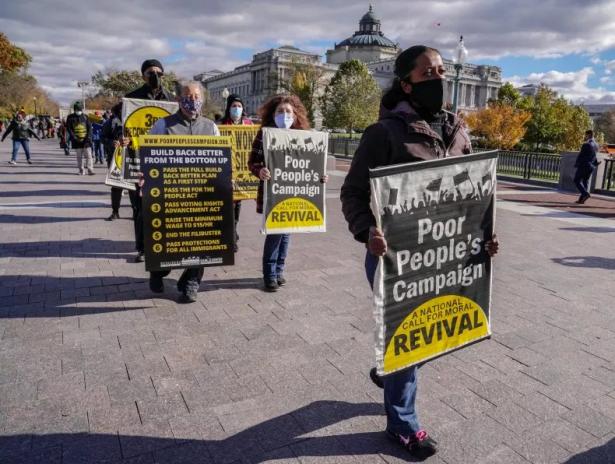 We are once again in a moment of extreme division, with rising assaults on democracy and levels of racism, sexism, and inequality that are tearing our country apart. There is no scarcity of solutions, but there is a scarcity of political will to do the right thing.

This may be about to change.

With Congress failing to extend vital safety net programs created during the pandemic, poor and low-income people will be voting for their lives in this year’s midterms.

Despite all the challenges of the pandemic and other barriers to voter participation, 58 million poor and low-income Americans turned out for the 2020 election. They did not vote for a return to “normal.”

For everyone to thrive, we must do much more to tackle the interlocking injustices that long pre-date the COVID-19 crisis—the injustices of systemic racism, poverty, ecological devastation, and militarism.

Two years after that election, we can point to some hopeful signs that the bold social and economic transformation we need is indeed possible.

Just-released Census statistics show a decline in the share of Americans who were living in poverty in 2021. Most striking: a drop in the child poverty rate from 9.7 percent in 2020 to 5.2 percent last year. The number of Americans who are either poor or low-income dropped from about 140 million before the pandemic to 112 million in 2021.

This was not just some fluke. In the face of the pandemic crisis, poor and low-income people have effectively mobilized for policy change.

Thousands of activists with the Poor People's Campaign and other organizations have participated in caravans, rallies, and acts of non-violent civil disobedience. Low-income West Virginians practically set up camp outside Democratic Sen. Joe Manchin's Charleston office.

Some 100,000 converged on Washington, D.C., in June to make their voices heard. Poor and low-income people know that, even with a 20 percent drop in poverty, inequality still leads to hundreds of unnecessary deaths every day.

In response to this sustained pressure, Congress has passed several bills that move the country in the right direction. The American Rescue Plan drove the drop in poverty in 2021 by temporarily expanding the Child Tax Credit and the Earned Income Tax Credit, along with other anti-poverty provisions.

Poor and low-income people and their advocates should feel proud of these achievements. We have shown that while the rich win most of the time in Washington, they don't win every single time.

And yet, the road to transformation remains long—and is still tilted in favor of the wealthy.

Pandemic policies that reduced poverty in 2021, including expanded unemployment insurance and child and earned income tax credits, have expired, leaving 40 percent of the country struggling to pay their bills. Meanwhile, efforts to tax billionaires' pandemic windfalls have failed, leaving the ultra-rich with trillions more in wealth than before Covid.

While wealthy landlords, affluent homebuyers, and interest rate hikes push the cost of housing ever upward, many local officials have focused on criminalizing homelessness. And Congress has failed to raise the minimum wage, reinstate the pandemic eviction moratorium, or invest in affordable housing so that everyone can have a roof over their head.

Biden's plan to cancel as much as $20,000 in student debt is welcome news for struggling families. But that maximum is less than a quarter of the average Paycheck Protection Program subsidy, a COVID-19 initiative that mostly benefited larger businesses.

New legislation will assist the poor with their energy bills, but rich fossil fuel company executives and shareholders stand to reap bigger benefits through expanded tax credits and oil and gas leases on federal lands.

And while many politicians push to cut pandemic aid and slash the growing wages for working people they falsely blame for inflation, mega-millionaire military contractor CEOs have nothing to fear. In July, the House passed a record-breaking $839 billion Pentagon budget.

But this isn't the only way our government can work.

In 2021, our organizations worked with Congressional Progressive Caucus leaders to articulate a bold, moral vision for our country. The Third Reconstruction Resolution draws on the transformational history of the First Reconstruction following the Civil War and the Second Reconstruction of the 20th century civil rights movement. In these two historic periods of severe strife and exploitation, multi-racial coalitions persevered and achieved significant strides towards racial and economic justice.

And here we find ourselves again and still.

As the Poor People's Campaign has held voter mobilization events around the country, we've seen how the most marginalized are building the power to revive our Constitution's commitments to establish justice, promote the general welfare, and ensure equal protection under the law.

We've made some steps towards these moral principles. But the process of reconstruction is only beginning.

Rev. Dr. William J. Barber II is a national co-chair of the Poor People's Campaign: A Call for Moral Revival.

Tope Folarin is the executive director of the Institute for Policy Studies.