This legislative assault on Philadelphia DA Krasner is part of a pattern by conservatives nationwide to stymie and/or remove the new generation of prosecutors dedicated to reforming the criminal justice system, a system historically steeped in race and class biases. 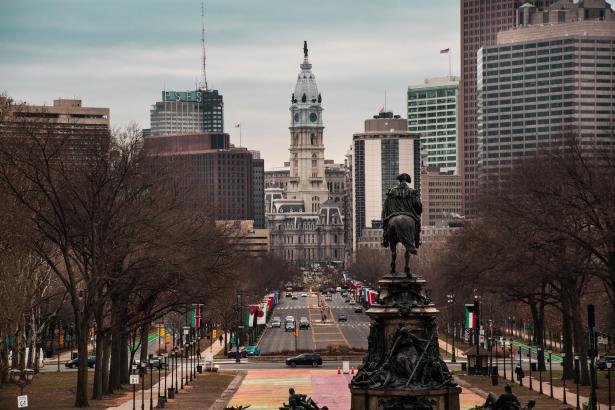 The dozens of protestors in Philadelphia who gathered recently outside the hearing held by a Republican dominated investigative committee of the Pennsylvania State House loudly chanted “Hey, Hey, Ho, Ho, This Political Circus Got To Go!”

That protest included circus performers to dramatize protestors’ contention that the committee’s hearing was a ‘clown show’ intended to stop overdue changes in criminal justice system policies and practices that are supported overwhelmingly by residents of Philadelphia.

“We want to highlight the fact that this hearing is a farce, a circus,” Kris Henderson said during the protest. Henderson is the executive director of the Amistad Law Project which does criminal justice reform work in Philadelphia.

The hearing by that legislative investigative committee is part of the latest effort by conservatives to remove Larry Krasner, Philadelphia’s reform minded district attorney. Krasner was the focus of the award-winning documentary series “Philly DA” that premiered on PBS in April 2021.

GOP legislators seek to remove Krasner through impeachment despite their failure to produce any evidence that Krasner engaged in criminal or unethical conduct – the standards for impeachment of elected officials in Pennsylvania.

Krasner, since his election in 2017, has instituted many substantive reforms. For example, Krasner’s office has ended 28 wrongful convictions produced by misconduct of police and prosecutors. Many of those exonerated spent over 20-years in prison. Krasner’s DA predecessors routinely rejected evidence of innocence and evidence of official misconduct from persons fighting their wrongful convictions.

This legislative assault on Philadelphia DA Krasner is part of a pattern by conservatives nationwide to stymie and/or remove the new generation of prosecutors dedicated to reforming the criminal justice system, a system historically steeped in race and class biases.

Reggie Shuford, executive director of the ACLU of Pennsylvania, in an op-ed published in July 2022, blasted the Republican effort to impeach Democrat Krasner as part of that “cynical political” campaign nationwide to undercut real reforms in the criminal justice system.

Shuford, in that op-ed, stated “there is little-to-no evidence” that criminal justice reforms lead to increases in crime.

At the forefront of efforts to remove progressive DA Krasner since his landslide election in 2017 is Philadelphia’s reactionary and racist police union. Krasner’s background is a civil rights attorney who successfully sued the City of Philadelphia repeatedly over police brutality. Krasner’s DA predecessors rarely prosecuted police for abusive misconduct that include false arrests, brutal beatings and fatal shootings of unarmed persons.

Last year Philadelphia’s police union failed in its effort to sink Krasner’s reelection when candidates endorsed and funded by that union were trounced in both the primary and general elections by vote total margins exceeding 2-to-1.

Kris Henderson and many in Philadelphia see this impeachment effort by the GOP dominated State House as crass robbery of the rights of Philadelphia voters to keep the DA of their choice.

GOP legislators and their few Democratic legislative allies contend their campaign to impeach Krasner is rooted in concerns for public safety not partisan politics. Those legislators blame Krasner for Philadelphia’s soaring rates of gun violence.

Blaming Krasner for gun violence ignores two important facts: (1) Police are responsible for corralling crime not prosecutors whose jobs is prosecute persons arrested by police, and (2) the GOP controlled legislature, for years, has blocked  Philadelphia’s City Council from enacting measures to address gun violence in that city.

“If the legislature was truly sincere about reducing violence it would address the social determinants that lead to violence that include poor education and high unemployment. The Legislature persistently fails to provide resources to zip codes in Philadelphia with the highest rates of poverty where violence is the highest,” anti-violence activist Movita Johnson-Harrell said.

According to Pa prison data, over 80 percent of the nearly 37,000 inmates currently in Pa’s 24 prisons were unskilled when arrested and most of those inmates read at an 8th Grade or lower level. Inmates in Pa prisons range from 11 under the age of 18 to nearly 4,000 aged 60 years and older.

The GOP legislators who routinely oppose increased funding for education from elementary to college levels willingly spend upwards of $80,000 per year to incarcerate an elderly inmate. Elderly inmates, the least likely to reoffend according to repeated studies, cost more to incarcerate than younger inmates due largely to high costs for their medical needs arising largely from conditions inside prisons.

While those protestors chanted and leveled criticisms in a park across from the building where that investigative committee held its hearings, persons impacted by crime invited to testify at the hearing blamed failing of police more than alleged shortcomings of DA Krasner. That committee barred Krasner from testifying at their hearing in Philadelphia.

“The testimony of the victims got away from the committee because the victims blamed police, particularly detectives, for not solving crimes,” Robert Saleem Holbrook said. Holbrook, who attended portions of the hearing, is executive director of the Abolitionist Law Center, a law project dedicated to ending race and class-based discrimination in the criminal justice system.

The GOP legislators who loudly assail Krasner are curiously silent about a Republican DA in a Western Pa county who is charged with numerous crimes including sexual assault, false imprisonment, harassment, and simple assault.

That DA, Jeffery Thomas, sued Somerset County officials for suspending his pay as he awaits trial. Lawyers for Thomas claim he is entitled to a paycheck because he hasn’t resigned or been impeached.

Movita Johnson-Harrell, who is also a mother of two sons slain by gun violence, said Thomas should face impeachment not Krasner. But, Johnson-Harrell said, Thomas is a Republican “so it’s hands off.”

Linn Washington, Jr. is a founder of This Can’t Be Happening and a contributor to Hopeless: Barack Obama and the Politics of Illusion, (AK Press). He lives in Philadelphia.