labor Battle Over Wage Rules for Tipped Workers Is Heating Up

A system counting tips toward the minimum wage is being fought in many places. 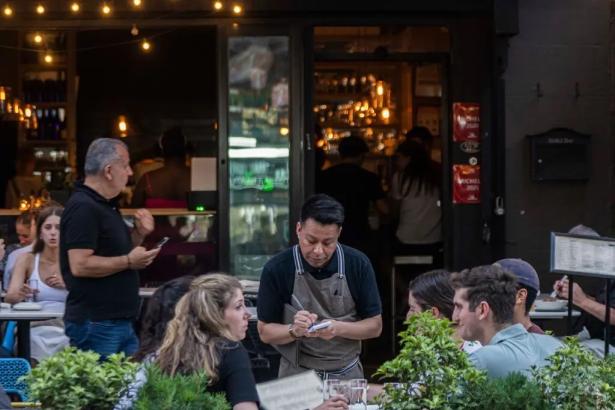 With Americans resuming prepandemic habits of going out, eating out and traveling, leisure and hospitality businesses have scrambled to hire, sometimes offering pay increases that outpace inflation.

But for many whose pay is linked to tips, like restaurant servers and bartenders, base wages remain low, and collecting what is owed under the law can be a struggle.

In all but eight states, employers can legally choose to pay workers who receive tips a “subminimum” wage — in some places as low as $2.13 an hour — as long as tips bring their earnings to the equivalent of the minimum wage in a pay period. Economists estimate that at least 5.5 million workers are paid on that basis.

The provision, known as the tip credit, is a unique industry subsidy that lets employers meet pay requirements more cheaply. And even in a tight labor market, it is often abused at the employees’ expense, according to workers, labor lawyers, many regulators and economists.

“It’s baked into the model,” said David Weil, the administrator of the Wage and Hour Division of the Labor Department under President Barack Obama, referring to the frequency of violations. “And it’s very problematic.”

Have you been shortchanged on tipped wages? We want to hear from you.

Terrence Rice, a bartender from Cleveland who has worked in the bar and restaurant industry since 1999, chuckled at the notion that the law is consistently followed.

“As long as I’ve been doing this, I have never, ever — not one time — met anyone that’s been compensated” for a below-minimum pay period, he said, adding that slow weeks with inadequate pay are viewed as the “feast or famine” norm in the industry. Busier seasons, weekends or shifts can bring a rush of a cash followed by slow weekdays, bad-weather weeks or economic turbulence.

Now the yearslong arrangement is coming under increasing challenge.

In the District of Columbia, a measure on the November ballot would ban the subminimum wage by 2027. A ballot proposal in Portland, Maine, would ban subminimum base pay and bring the regular minimum wage to $18 an hour over three years.

Employers in Michigan are bracing for increased expenses in February, when the state tipped minimum of $3.75 an hour is set to be discontinued and the regular state minimum wage will rise to $12 from $9.87.

Xander Gudejko, a district manager for Mainstreet Ventures Restaurant Group, which owns spots throughout Michigan, offered a common view in the local business community: “When I think of the potential positives for us, I can’t really think of anything.”

Though tipped employees can include hotel housekeepers, bellhops, car washers and airport wheelchair escorts, most are in food and beverage service jobs. Perfect compliance may involve a complex dance of having workers clock in at the minimum-wage rate for setup work until opening, clock out, then clock back in at a tipped wage.

Businesses using the two-tier system are prohibited from having tipped employees spend more than 20 percent of their shifts on side work like rolling silverware or cleaning. They also cannot include back-of-house employees, like kitchen workers, in tip pooling — the collection and redistribution of all gratuities at a certain rate, usually set by the employer.

The last robust compliance investigation of full-service restaurants by the Labor Department is somewhat dated, having ended in 2012, but it found that 83.8 percent of the examined firms were in violation of labor law, with a large share of the infractions related to tips.

The National Restaurant Association, which represents over 500,000 small and larger restaurants, argues that instances of illegal underpayment of tipped workers are overstated and that workers, customers and employers, in general, find the system workable.

“There’s a reason people choose tipped restaurant jobs — they know the economics are in their favor,” said Sean Kennedy, the group’s executive vice president of public affairs. “For many servers, they’ve chosen restaurants as a career because their industry skills and knowledge mean high earning potential in a job that’s flexible to their needs.”

Even when the law is followed to the letter, Mr. Stygar said, the system is unfair to workers. “You are sacrificing your tips to meet the employers’ minimum-wage obligations,” he said.

Employers are required to keep records of tips and usually do so through a mix of their own accounting, credit card receipts and self-reporting from staff members. Most involved in the system say the tracking works in murky ways.

“In reality, who’s monitoring this complex two-tier system?” said Sylvia Allegretto, a former chair of the Center on Wage and Employment Dynamics at the University of California, Berkeley.

“The onus is on you, the worker, to possibly enrage, or at least annoy, your boss, who also, coincidentally, controls your schedule,” she said.

In many civil disputes, employment attorneys have successfully argued before courts that managers implicitly wield opportunities to work more lucrative shifts as a carrot for not rocking the boat on workplace abuse and as a stick to prevent retaliation.

Sylvia Gaston, a waitress at a restaurant in Astoria, Queens, said her base wage is $7.50 an hour — even though New York City’s legal subminimum is $10, which must come to at least $15 after tips. Ms. Gaston, 40, who is from Mexico, feels that undocumented workers like her have a harder time fighting back when they are shortchanged.

“It doesn’t really matter if you have documents or not — I think folks are still getting underpaid in general,” she said. “However, when it comes to uplifting your voices and speaking about it, the folks who can get a little bit more harsh repercussions are people who are undocumented.”

Subminimum base pay for some tipped workers in the state, such as car washers, hairdressers and nail salon employees, was abolished in 2019 under an executive order by Gov. Andrew M. Cuomo, but workers in the food and drinks industry were left out.

Gov. Kathy Hochul, Mr. Cuomo’s successor, said while lieutenant governor in 2020 that she supported “a solid, full wage for restaurant workers.” And progressive legislators plan a bill in January that would eliminate the two-tier wage system by the end of 2025.

When The New York Times asked if she would support such changes, Ms. Hochul’s office did not answer directly. “We are always exploring the best ways to provide support” to service workers, it said.

Proponents of abandoning subminimum wages say there could be advantages for employers, including less turnover, better service and higher morale.

David Cooper, the director of the economic analysis and research network at the Economic Policy Institute, a progressive think tank, contends that when wage laws are changed to a single-tier system, business owners can have the assurance that “every single person they compete with is making the same exact adjustment,” reducing the specter of a competitive disadvantage.

Still, he acknowledged, there would downsides. Restaurants and bars with less popularity and lower productivity could lose out in a substantially higher-wage environment, leading to higher prices and potentially closings.

“This is not costless,” Mr. Cooper said. “But for a long time, we haven’t been internalizing the costs of paying workers less than they can live on.”

Some employers who could use the two-tier wage system are taking a different approach.

Talia Cella, 33, is a training manager at Illegal Pete’s, a burrito spot founded in Boulder, Colo., with locations throughout Arizona and Colorado. Those states have a subminimum wage under $10 an hour for tipped workers, and a regular minimum under $13. Illegal Pete’s offers starting pay of $15 plus tips as well as health care coverage.

Before rising to her current position, Ms. Cella was hired as a server and trained as a bartender in 2016. She was previously making base pay of $5 an hour elsewhere as a waitress and hostess, unable to afford a car and biking to the bus stop in snow to make winter shifts.

Even at what her company is paying, Ms. Cella said, recruiting and hiring are “more challenging than ever” because of labor shortages. But she said the business, with the help of a recent 10 percent price increase, remained profitable and was able to expand despite soaring food costs.

She attributes this, in part, to “out-vibing” the competition.

“Having work be a stable part of your life — where it’s like you go there, you’re getting paid a living wage, you have health insurance, you know this place cares about you — then you’re more likely to show up to work and give your best,” Ms. Cella said. “If you want people to give you more of themselves, more of their time, more of their effort, then you have to be willing to invest more of your company into the individual people as well.”