The UFCW may be contemplating supporting Kroger’s mega-merger. That should give every union member a sinking feeling. 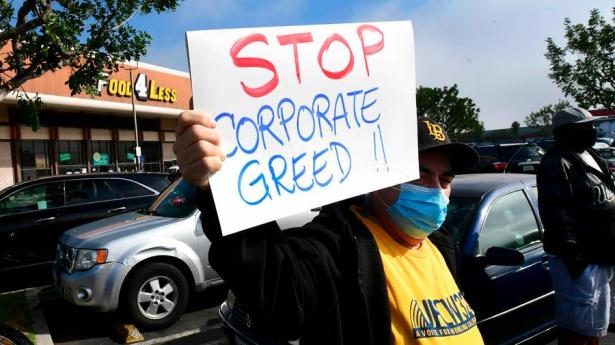 There has always been a fundamental tension in the organized labor world between people who think that unions exist to counteract the self-serving tendencies of businesses, and people who think that unions should copy the self-serving tendencies of businesses. The gap between the view that unions should change capitalism and the view that unions should just help working people get their piece of capitalism is not just fodder for theoretical arguments — billions of dollars, thousands of jobs, and the entire direction of the post-neoliberalism economy could ride on it. We’re seeing that tension painfully demonstrated right now, at the grocery store.

Last week, Kroger announced its plan to merge with Albertsons. That merger would create a $25 billion grocery giant that would control more than 15% of the American grocery market, second only to Walmart. (In certain local markets, it would control the majority of the grocery business.) Kroger argues that it needs such massive scale in order to compete with Walmart and Amazon — a strange claim, since Kroger’s profits grew 14% in the past year.

Why do companies find this sort of mega-merger so attractive? It allows them to squeeze suppliers for lower prices, and, on the flip side, it gives them greater pricing power over consumers. (Mergers also create a ton of fees for advisors and potential bonuses for executives, and a little sugar rush jolt to the stock price — all things that create personal incentives for the people in charge to do deals, whether or not they end up being wise.) What companies say when they do such mergers is ​“It will help us lower prices for consumers, and it will help us strengthen our company for shareholders,” as if corporate dealmaking was an altruistic process. What they mean is ​“It will help us proceed one step closer to monopoly power, the ultimate goal of all corporations, and also it will help the CEO buy a new house.”

Then there is the labor angle. These grocery companies have an enormous number of employees who are unionized with the United Food and Commercial Workers (UFCW) — the merger, in fact, could create the biggest single private sector union employer in the country, even bigger than the Teamsters unit at UPS. Common sense should tell you that bigger, more omnipotent companies with more extreme market power are not generally a good thing for their own blue collar workers, for many of the same reasons they are not a good thing for consumers. Companies want to get bigger to squeeze suppliers, customers, and workers in service of shareholders and executives. That is Capitalism 101, and it has been demonstrated countless times. It is an easy call for anyone who considers themself a progressive, or who cares even a bit about the balance of power between capital and labor, to oppose this merger and others like it. It is quite a tell that the fairytale of the free market’s benefit is all about how competition will create an optimal outcome for everyone, but the reality of capitalism is that companies seek to eradicate every possible trace of competition in order to accrue benefits for themselves and screw everyone else.

This merger needs approval from the Biden administration’s Federal Trade Commission. That means this is a political issue, and opens a door for organized labor — particularly the UFCW — to have an extraordinarily large say, given the fact that this administration actually listens to unions more than any other in living memory. As soon as the merger was announced, a group of five UFCW locals representing tens of thousands of grocery workers in the Western United States put out a statement opposing the merger, saying it would be ​“devastating for workers and consumers alike and must be stopped,” for all of the reasons just mentioned. Their position was very clear. They knew this would be bad, and they immediately stood against it. The internal reform caucus called Essential Workers for a Democratic UFCW is also agitating against the merger.

Oddly, though, a full day then went by with silence from the UFCW’s International headquarters. Then, the union dropped a statement that was excruciating in its refusal to take a stand. Rather than clearly coming out against the merger, it said that ​“Given the national impact such a merger would have, the UFCW and our Local Unions are discussing this and will stand together to prioritize the best interests of our members, their families, and the communities they proudly serve,” adding that the union ​“will oppose any merger that threatens the jobs of America’s essential workers, union and non-union, and undermines our communities.” It was a glaring, flashing siren that the leadership of the UFCW may be considering cutting a deal.

And here is where we come to my initial point about how union leaders see their mission. In theory, the UFCW could reach an agreement with Kroger that, for example, ensured the company would be neutral as UFCW went about organizing more of its workers. It could be a way to deliver hundreds of thousands of new members into the UFCW’s ranks. (Of course, thousands of existing UFCW members could be laid off as a result of the store divestments that would go along with this merger.) But no matter what the company offered, common sense again tells you that they will not give up the underlying benefits of this mega-merger — which are structurally bad for suppliers, consumers, and workers. A union thinking they will get a ​“good deal” out of a merger like this is like someone who decides they are a savvy businessman because they sold their home for firewood. Time will pass, and they will regret it. The inherent nature of these deals is bad news for workers. That is why the UFCW locals found it such an easy call to oppose this.

The UFCW is huge, and it has many fine people working for it, and many inspirational members. But, generally speaking, it is a weak union compared to what the Teamsters have built at UPS. Grocery workers were devastated by the pandemic. They did not, by and large, use the leverage they had at that crucial moment to win any lasting benefits. A report commissioned by UFCW in January showed dire conditions for Kroger workers: widespread homelessness, inability to pay for basic expenses like food, and an average wage under $30,000 per year. These facts are a moral stain on the company. Left unstated, though, was the fact that all those workers are UFCW members. The union has an extremely difficult job, but there is no denying the reality that it has not shown itself to be up to the task of making grocery work, as a whole, a living wage career. To the extent that the union is in a long-term battle with the employers, it is losing. So while the leadership of the UFCW might find it enticing to support the merger in exchange for a possible membership boost, there is good reason to doubt that the uncertain benefits to grocery workers themselves would outweigh the guaranteed harm.

No union should think of workers as pawns to be traded back and forth with companies, in order to benefit the union. The workers are the point. The path to building power for those workers is to organize, not to strike a deal with a corporation that everyone knows will erode labor’s position in the long term. If UFCW is concerned about Walmart’s power, they should organize Walmart — something they have spent a ton of money failing to do for more than a decade. Trader Joe’s, an obvious grocery organizing target, had to organize its first unions independently. New Seasons Market also has a burgeoning independent union drive. These independent unions popping up squarely inside of UFCW’s jurisdiction are a sign that the union has long failed to build an organizing program capable of covering the industry it is supposed to cover. Focusing on that would be a good use of the union leadership’s time and money.

With 1.3 million members, UFCW should be a leading force in the labor movement. That is simply not the case right now. Inside of any union that large are countless fiery, inspiring workers and organizers, and I have spoken to many of them over the years. They know corporate consolidation is poison. They know that organizing needs to be energized. They know that grocery workers deserve much more than they got for risking their lives to keep America fed during the pandemic. The question is whether the leadership of this massive union can make it an institution that lives up to its potential. There has been no formal position taken on this merger yet, so all could still turn out well. But the UFCW’s actions so far do not seem to indicate that they understand that they are supposed to be leading this fight, rather than deciding which side they’re on.