food When Fine Dining Is a Horror Show

“Food really puts us on the spot in terms of making us perform for those around us who will, or at least we think will, be judging us based on how and what we eat,” says Adam Lowenstein, the author of Horror Film and Otherness. 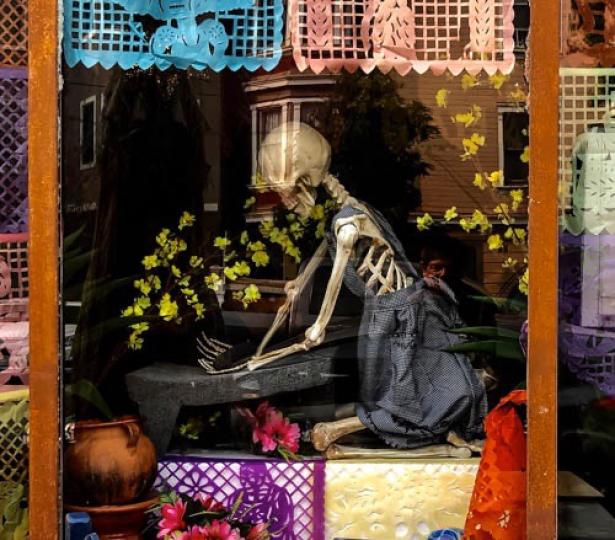 As the genre continues to confront societal issues like climate change and income inequality, food’s role in horror is as prominent as ever. , jeannetteferrary.photoshelter.com

As the camera pans across a steel blue dining room, a small coterie of tech bros, celebrities, political power brokers, and food obsessives walks to their tables, past a kitchen where a team of identically uniformed chefs are working with almost military precision. the diners take their seats as nitrogen gas is used to turn milk into a powdery “snow,” and small half-spheres of pickled cucumber melon are meticulously plated onto a slab of dark stone with a pair of tweezers. Photos are forbidden, because the chef believes that the “beauty of his creations lie in their ephemeral nature.” When the chef "finally does enter the room, the energy shifts entirely as those cucumber dots and milk snow come together to create the amuse-bouche. Dinner is served, and at the highly exclusive Hawthorne, that’s a terrifying prospect.

Hawthorne is the restaurant at the center of The Menu, one of fall’s most anticipated horror films, set to hit theaters on November 17. Starring Ralph Fiennes, Anya Taylor-Joy, and John Leguizamo, it follows a group of people as they travel to a secluded island for a rarefied meal. As we learn in the opening seconds of the trailer, dinner at Hawthorne costs a whopping $1,250 per person, and the space seats only 12 people at its nightly service. It’s known for envelope-pushing modernist cuisine, the kind that involves various gels and foams and ferments, and its minimalist, slightly industrial interior aesthetic recalls real-life temples to modernist cuisine, like Geranium and Noma. Fiennes coolly commands his kitchen with terrifying precision, the sudden clap of his hand serving as both a startle and signal that the next course is about to arrive.

As you might expect, these guests end up being treated to a whole lot worse than just a fancy meal as they attempt to “play the game,” or "figure out the theme of the night’s dinner — which seems to be making it out of the night alive. Directed by Mark Mylod, The Menu blends tongue-in-cheek criticism of capitalism, the modern restaurant industry and the forces that drive it, and unbridled horror, all while interrogating some of the most basic of human fears. Ultimately, the film asks a pretty terrifying question: What if, when you went out to this extravagantly expensive dinner, your most vulnerable insecurities, and maybe even your actual body, were on the menu?

Also slated for release in November is director Luca Guadagnino’s Bones and All, in which Timothée Chalamet and Taylor Russell play a young couple traveling across America who find themselves in the midst of a passionate love affair that is inextricably tied to their ravenous desire to eat other people. The film has been described as a “cannibal love story,” and its teaser trailer includes familiar horror movie tropes of blood-curdling screams and shots of people running from an off-camera threat, likely our two young lovebirds. With stars like Taylor-Joy, Fiennes, and Chalamet on board, these two films represent a new pinnacle in horror’s decades-long pursuit of using eating to scare the hell out of viewers.

In the 1931 film Dracula, the vampire from Bram Stoker’s most iconic work feasts on the blood of his victims. One of horror’s most common bad guys, the zombie, eats brains, as does Hannibal Lecter, the sociopathic cannibal from Silence of the Lambs. It makes sense that films that seek to terrify and titillate us, to inspire jump scares and alarm, would mine the most basic of human fears (being murdered, being eaten). But horror is also notorious for making us squirm while excavating our insecurities: In film, perhaps no genre is more preoccupied with forcing us to confront social taboos and exploring the arbitrary nature of social norms more than horror.

It’s not surprising, then, that in The Menu, one of the world’s best restaurants serves as the setting for terror. The real-life horrors of working in a fine dining kitchen, which range from gruesome physical injuries to sexual harassment to psychological abuse, are well-documented and explored in excruciating detail in the film. For diners, these highly exclusive spaces come with their own set of internal rules and unspoken codes of behavior, making even the most socially adept — and wealthy — among us feel uncomfortable.

“Food really puts us on the spot in terms of making us perform for those around us who will, or at least we think will, be judging us based on how and what we eat,” says Adam Lowenstein, a professor of English and film studies at the University of Pittsburgh and the author of Horror Film and Otherness. “I think that’s a pretty universal fear, one that works in many different contexts.”

Lowenstein points to a long-standing tradition in horror movies of exploring questions of class, privilege, and consumption. In films like George Romero’s legendary zombie flick Dawn of the Dead, the undead’s indiscriminate, violent brain-eating is inextricably linked to the American culture’s obsession with mass consumption no matter the human cost. As Lowenstein notes, Romero even adapted philosopher Jean Jacques Rousseau’s famous quote about eating the rich into the film’s logline: “When the people shall have no more to eat, they will eat the rich” became “When there’s no more room in hell, the dead will walk the earth.”

“Eating is so fundamental to human experience and survival that when food is distributed inequitably, you start to get to really core issues about society,” Lowenstein says. “I think horror is very much attuned to that, and if human beings can’t figure out a way to be fair to each other, horror will seek to equalize that dynamic, and it’s not going to do it in ways that are pretty and easily digestible.” Eating is, of course, mandatory, but getting on a plane, then a boat to go spend thousands of dollars at a restaurant — as in The Menu — is an extreme extravagance, one ripe for this sort of critique.

Well beyond the subtext, though, it’s objectively true that the act of eating is, in a lot of ways, viscerally horrifying. As we eat, we literally flay animal flesh away from the bone with knives, then tear it apart with our teeth. We happily pluck oysters, octopuses, and sea urchins from the sea and eat them alive, paying handsomely for the privilege. We feast on the grotesquely fattened livers of force-fed geese. (Vegetarians excluded, of course, but there have been thousands of cases of foodborne illness linked to produce contaminated by bacteria found in fecal matter.) “Horror is a very visceral genre, and sometimes that means literally visceral — the blood, the guts, the intestines,” he says. “But it is always looking for a primal engagement and confrontation with the audience, and eating has proven a very effective way to do that. It’s wrapped up with the very core identity of the genre.”

Often, this means watching on-screen characters eat things that our culture has collectively decided are unacceptable: blood, human flesh, vomit, and feces. In the 2002 French art horror film In My Skin, the protagonist Esther, a successful career woman, attends a glamorous dinner with her boss and an important client, and begins hallucinating that her arm has become detached from her body. To prove that it isn’t, she sneakily sticks a fork into the limb, and — spoiler alert — ends up literally eating herself alive in an effort to find some kind of emotional satiety. Bones and All, based on the novel by Camille DeAngelis, takes a decidedly different tack. In this exploration of raw sexuality and power, protagonist Maren Yearly, portrayed by Taylor Russell, is a young woman who turns her forbidden consumption desires outward, eating the %esh of those who love her.

In 2019’s folk-horror smash Midsommar, director Ari Aster drives home the naturalistic horror of the film’s pagan cult when they persuade a character to unknowingly drink menstrual blood and eat pubic hair in a stomach-churning love spell. According to Aster, the imagery in these scenes is actually rooted in his research of Scandinavian history and folklore, and that’s partly what makes them so terrifying. Accidentally consuming someone else’s bodily fluids could conceivably happen to you in real life. And no matter what you think your own deepest, darkest fear is, almost no one among us wants to be forced — or tricked — into eating something that we find repulsive. Outside of the immediate revulsion evoked by consuming something as taboo as human brains or menstrual blood, there’s also something uniquely scary about being forced to ingest anything against your will: It’s a violation of your bodily autonomy, and that’s a near-universal fear. Perhaps the only thing worse is being killed, the ultimate revocation of a person’s agency.

As the genre continues to confront societal issues like climate change and income inequality, food’s role in horror is as prominent as ever. The 2022 David Cronenberg film Crimes of the Future is centered on a world in which humans physically adapt to a not-too-distant postapocalyptic future in which the world is so polluted that their bodily organs actually evolve to eat toxic plastics and other poisons in order to survive. Last year’s The Feast takes a different tack, using the context of a truly terrible dinner party to explore the human impact on the natural environment. In the coming months, The Menu and Bones and All will oer a bounty of unique opportunities to think about how distinctly scary food and eating can be, all depending on your own personal neuroses. &