film Elizabeth Banks’ New Film ‘Call Jane’ Will Be Screened at Abortion Clinics Across the U.S.

Director Phyllis Nagy told Jezebel it was important for her to “normalize this very common healthcare procedure, which it’s never treated as in movies.” 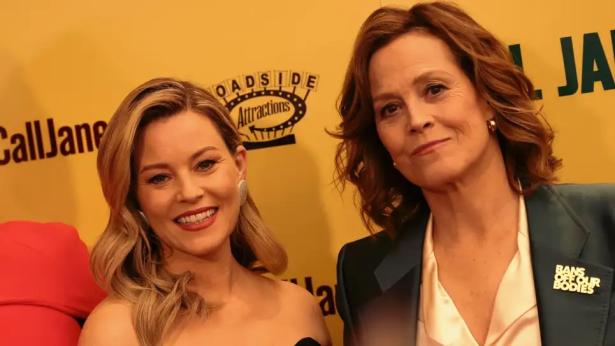 Elizabeth Banks’ new film, Call Jane, tells the story of a conservative suburban mom in 1968 who seeks an illegal abortion with the help of Chicago’s Jane Collective and becomes an integral part of the covert abortion care network herself. You can see the movie, which premiered Friday, in theaters–or in independent abortion clinics and Planned Parenthood health centers around the country, which will be screening it and even using it as a fundraiser to help with relocation fees.

“We see all that you do, and we are in this fight with you,” Sigourney Weaver, who stars in the film, says in a special welcome message that she and Banks filmed for abortion care workers and volunteers.

Watching Call Jane, I imagined existing in a world in which the ending—where everyone celebrates the passing of Roe v. Wade—felt hopeful. Instead, I watched the activists burn their index cards detailing the lives of pregnant women desperately seeking help, because suddenly everyone could get an abortion, and I tried not to weep. It felt like watching people on the Titanic dancing and partying, and having the movie end just before they see the iceberg.

“The ending has always made me want to go off and go under the covers,” director Phyllis Nagy tells Jezebel. She’s referring to when Weaver and Elizabeth Banks’ characters whisper about all of the other inequities they could take down next, because nothing could be harder than legalizing abortion. “But the burning of the cards takes on this other significance now, which is that, yeah, we are going up in flames,” she said. “You better be ready, and it’s happening. The brutality of Dobbs [makes] it even more shocking.”

The film has multiple scenes that parallel what is happening in the world now: It reckons with white feminism, the painful process of deciding who gets abortion funds, and even 11-year-old pregnant girls and people with cancer who need abortions so that they can access chemotherapy. What really separates it from the rest, though, is how it portrays abortion in groundbreaking ways when compared to other Hollywood movies. Steph Herold, who tracks depictions of abortions on television and film as a researcher at Advancing New Standards in Reproductive Health (ANSIRH), says Call Jane is different because “it shows many different abortions, when usually we have one or two, at most.” Nagy’s film even shows how people can be supported after their abortions: The Janes take the patient to a house to rest and offer them spaghetti post-procedure.

Films and TV rarely show women as abortion providers at all, but we see Banks’ character, Joy, transition from someone who doesn’t support abortions to a patient, to an abortion doula, to a provider. (Herold added that she did find it a little frustrating that it was yet another movie about the heroic journey of a conservative, white, suburban mom, but she appreciated that it still called out white feminism.)

Joy’s abortion was shown on screen from start to finish. Nagy said it was important to her to “normalize this very common healthcare procedure, which it’s never treated as in movies.”

“I was just adamant that we had to show the entire procedure from beginning to end,” said Nagy. “The only thing we’re missing is that we don’t give enough time for other drugs to kick in.”

“We could have made a movie about root canals,” Nagy continued, “because it’s a procedure that people are afraid of. Not only are people afraid of it, it’s just fraught with all of that bad symbolism that is really made by the patriarchy.” She said she wanted every one of her abortion scenes to demystify the procedure.

Nagy closed the set for all of the abortion scenes. Beyond the actors involved, “it was just me and the [cinematographer], and not even the first [assistant director] was there,” said Nagy. “It created this sense of quiet and this sense of, we are actually in a place where quiet is demanded, as it would have been.”

She had the women undergoing the abortions on set early and had them wait, to mimic how they would have waited before their procedures. “I didn’t ask them to put their hospital gowns on, but they did,” said Nagy. “By the time we got to the shot they were ready for whatever.” Banks’ abortion scene took almost the full day to film.

Herold said she appreciated how Nagy portrayed the abortion experience as getting better and better for the patients as the film went on. Joy’s procedure was with a matter-of-fact male provider, and the room was very sterile, cold, drab with blank walls. But when Joy performs her first abortion, we see her in a purple room with pillows and other women there to support the patient. Joy walks the patients through what she’s going to be doing and empathizes with them, admitting that she was scared for her own abortion and telling one girl who said she wants to be a mother one day that she will be when she’s ready. “I would want that abortion on the bed, I would not want that abortion in this rickety scary room with this jerk,” said Herold.

Nagy said she wanted the film to show “the journey from what it was back in the day to what it could be.” She wanted to add touches of warmth to the procedure. “We still don’t do that well, but I think the women of the Janes did that very well.”

Banks said in the message to those watching at abortion clinics, “Enjoy the film, vote, and from the bottom of our hearts, thank you.”