Remembering the Veterans Who Marched on DC To Demand Bonuses During the Depression, Only To Be Violently Driven Out by Active-Duty Soldiers

In 1932, with the Great Depression underway, President Herbert Hoover and General Douglas MacArthur violently suppressed the Bonus March, a massive encampment of veterans demanding relief, with far-reaching and unforseen consequences.

November 11, 2022 Shannon Bow O'Brien The Conversation
Printer friendly
Remembering the Veterans Who Marched on DC To Demand Bonuses During the Depression, Only To Be Violently Driven Out by Active-Duty Soldiers Published November 11, 2022 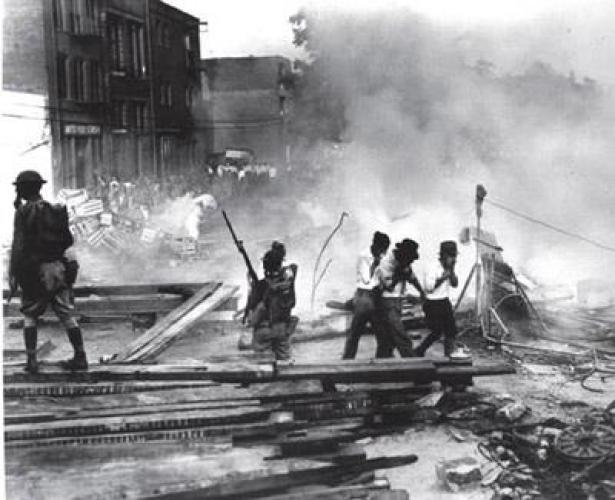 The Bonus Army March is a forgotten footnote of American history.

It involved as many as 30,000 mostly unemployed veterans who converged on Washington, D.C. in the spring and summer of 1932 to demand an early cash payment of a bonus they were promised for their volunteer service in World War I.

The bonus was due in 1945, but the Great Depression created financial panic across the country, and the WWI veterans wanted their money sooner rather than later.

When the U.S. Senate refused to pass a bill to make the payments, many of the veterans returned home. But the great majority remained and set up camps and occupied buildings near the Capitol – much to the dismay of local police, who tried to evict the demonstrators from their makeshift campgrounds.

At that point, on July 28, 1932, the police asked for federal help. In a written statement, President Herbert Hoover deployed his Army Chief of Staff, Gen. Douglas MacArthur, to settle the matter.

“In order to put an end to this rioting and defiance of civil authority,” Hoover wrote, “I have asked the Army to assist the District authorities to restore order.”

MacArthur’s orders were to secure the buildings and contain the protesters by surrounding their campsite in Anacostia Flats located near the Capitol.

But as MacArthur would do throughout his career – most notably in Korea when his disobedience resulted in his firing – he exceeded his orders.

Late that afternoon, historians have written, nearly 500 mounted cavalry men and 500 infantry soldiers, with bayonets drawn, were accompanied were accompanied by six tanks and another 800 local police officers to Anacostia Flats. It didn’t take long before the protesters were chased out of the city and their encampments burned to the ground.

Aides to MacArthur would later say he never received the orders to simply contain the Bonus Army. 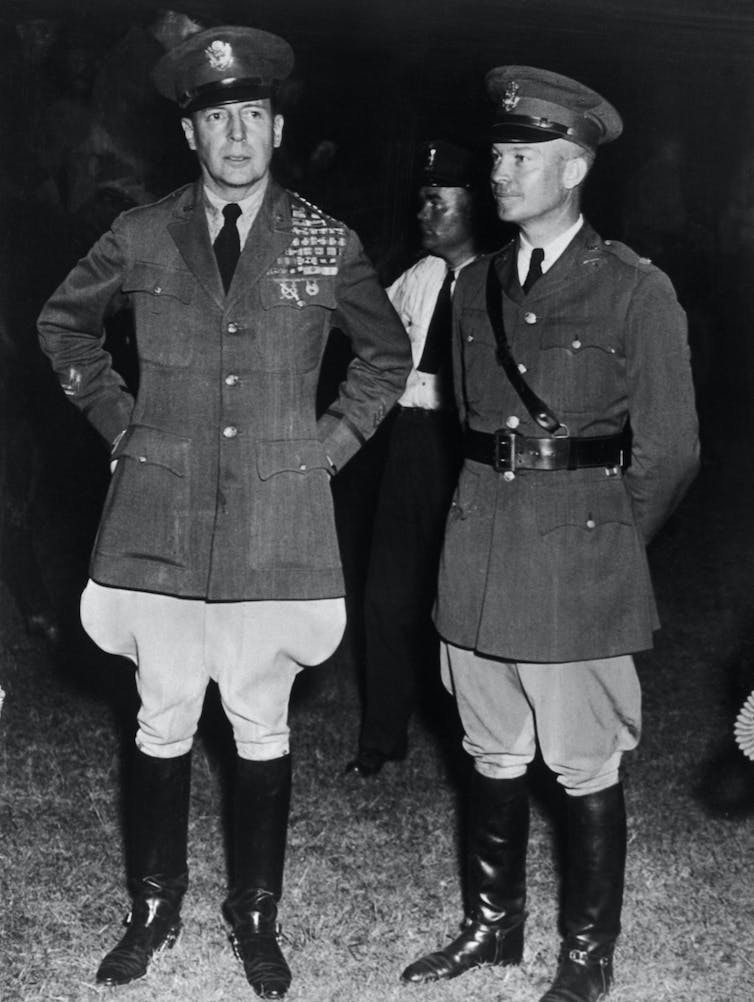 The Bonus Army March was one of the few times in American history when the U.S. military was used to shut down a massive demonstration of peaceful protesters. The debacle also came to symbolize Hoover’s perceived callousness toward the unemployed during the Great Depression and led to his defeat by Franklin Roosevelt in the 1932 presidential election.

What the military response did not do was deter the Bonus Army demonstrators for long.

The fight for bonus checks

At the end of the First World War in 1918, the U.S. government wanted to provide bonus pay to the soldiers who volunteered to fight in the American Expeditionary Force.

The volunteers were given certificates promising a bonus in 1945. Under the agreement, each veteran would receive US$1 for every day served at home, and $1.25 for every day served overseas. According to the World War Adjusted Compensation Act, a maximum of $625 plus compound interest per veteran was set. 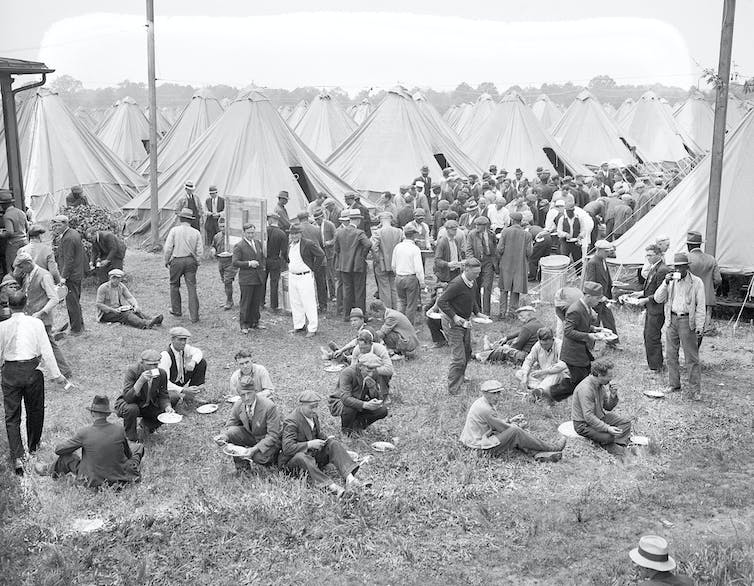 Members of the Bonus Army are shown eating their lunches beside their tents in this May 12, 1932, photograph. Bettmann/GettyImages

But by the winter of 1931, many veterans, like most Americans, were desperately in need of cash.

The Bonus Army became a problem for Hoover and congressional leaders as local authorities grew tired of an estimated 30,000 people camping out in their streets and squatting in city buildings.

But faced with a shrinking federal budget and precarious national economy, neither Hoover nor Congress wanted to authorize further depletion of the national treasury. Estimates were as high as $2.3 billion for the federal government to pay the bonuses. 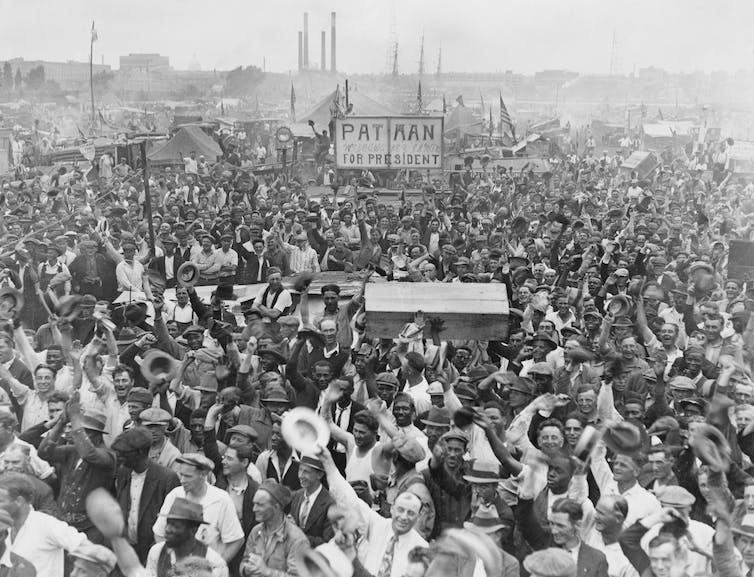 Bonus marchers tried to pressure congressional leaders by having veterans in the waiting rooms of the offices of each member of the Ways and Means Committee, which oversees the federal budget. But they were losing the public relations war turning against them.

By that time, rumors spread by opponents of the marchers were flying among congressional leaders and military officials about the unsanitary conditions at the camp, as well as possible communist infiltration.

When the bill to pay the bonus was defeated in July 1932, an estimated 8,000 Bonus Army marchers were at the Capitol. With that many angry men surrounding the building, local police feared potential violence.

But instead of launching a violent attack, the marchers began singing “My Country Tis of Thee” and “America the Beautiful” as they walked back to their camp.

Use of military force

On July 28, 1932, the local and federal governments decided that time had run out for Bonus Army demonstrators.

Around 11 p.m., MacArthur called a press conference to justify his actions.

“Had the President not acted today, had he permitted this thing to go on for 24 hours more, he would have been faced with a grave situation which would have caused a real battle,” MacArthur told reporters. “Had he let it go on another week, I believe the institutions of our government would have been severely threatened.” 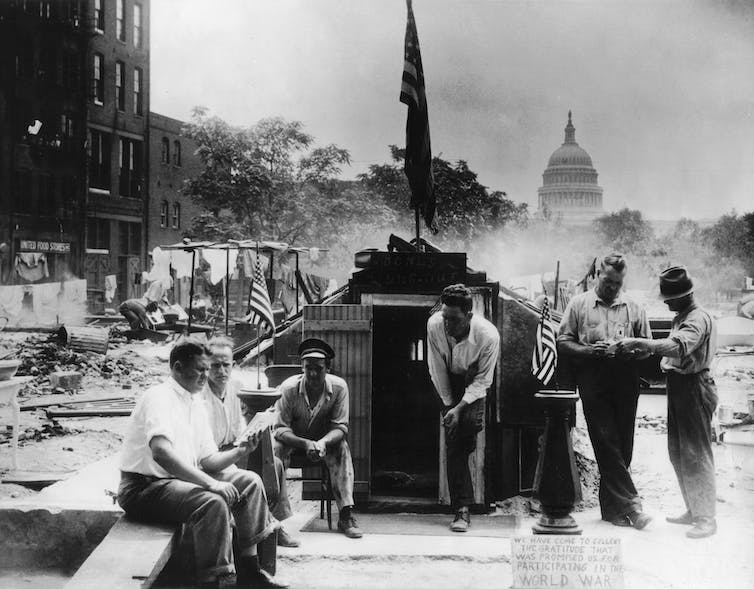 In this 1932 photograph, a group of men huddle near the ruins of their Bonus Army camp. Photo12/Universal Images Group via Getty Images

With MacArthur in command, shacks were set on fire, and even the tents loaned by the National Guard were destroyed. Tanks and soldiers blocked several bridges in order to prevent people from re-entering the city.

Images of children and women driven out by tear gas and flames shocked and appalled the American public when they were published by newspapers across the country.

Despite their apparent defeat, Bonus Army veterans continued to push for early payments.

Four years later, in January 1936, Congress passed the long-stalled Bonus bill that called for payments of nearly $2 billion to the mostly men who volunteered their services during World War I.

Congress overrode Roosevelt’s veto and paid the veterans an average of $580 per man, which was slightly less than the $600 they would have received had they waited until 1945.

Today, the Anacostia field is a largely overgrown meadowland and only has one very small sign marking that the Bonus Army was ever there.