Adjunct faculty at the New School in New York City enter their second week of a strike. The university advertises itself as socially conscious but has not raised adjunct pay since 2018, resulting in an effective 18% pay cut adjusted for inflation. 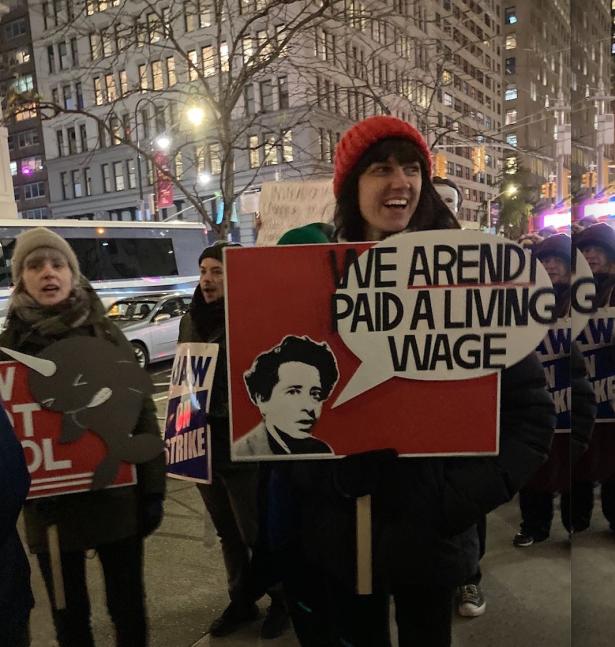 Part-time faculty at the New School entered the second week of a strike on Monday as negotiations between the two parties over pay and working conditions appeared to stall.

According to union organizers, the university walked away from the bargaining table over the weekend after making a “final offer” that failed to account for the cost-of-living raises sought by staff.

In an email to students on Sunday night, the university said it had “done all it can in providing a significantly enhanced proposal.” A school representative added they had not walked away from negotiations, but had urged the union to respond swiftly “as time is of the essence with the holiday and end-of-semester activities approaching.”

Roughly 2,600 part-time faculty at the university, which also includes the Parsons School of Design, voted overwhelmingly to authorize a strike last week. They say they have not received a raise since 2018, representing an effective pay cut of 18% when adjusted for inflation.

In response, the New School said it respected faculty’s right to strike, but urged students to continue attending classes – either by completing online modules or finishing already assigned coursework.

The strike marked a culmination of a long-simmering battle over employee pay at the prestigious Manhattan school, which often boasts of its progressive credentials. Faculty note that students pay upwards of $200,000 for a four-year undergraduate education, while many administrators are among the highest compensated in the country.

The university’s most recent offer – which includes a 7% raise in the first year and 2.5% increases in subsequent years – was still far below the rate provided to other academic workers, according to the union, ACT-UAW Local 7902.

“This ‘last, best, and final’ offer by the University is an aggressive union-busting tactic that one would expect from employers such as Amazon, Starbucks, and John Deere, not a progressive, social justice institution like The New School,” the union said in a statement.

The strike comes amid a wave of union struggles across higher education. Nearly 50,000 academic workers within the University of California school system walked out last week, one of the largest strikes in school history.

Last month, 95% of adjunct faculty at New York University authorized a strike, an outcome that was narrowly avoided after the school made last-minute concessions.

Mallory McMahon, an adjunct writing professor at NYU and graduate of the New School, said she was shocked by her alma mater's alleged refusal to negotiate further.

“Labor disputes happen,” she told Gothamist. “But to see this rejection of the entire process from a school that advertises itself as socially conscious makes me really question where the university has gone.”