film With Namor, Wakanda Forever Does What Latine Media Will Not

For generations, entertainment media has invisibilized and/or stereotyped Black and Indigenous people with origins across Latin America, just as its Spanish and mestizo white supremacist leaders have done in this region throughout history. 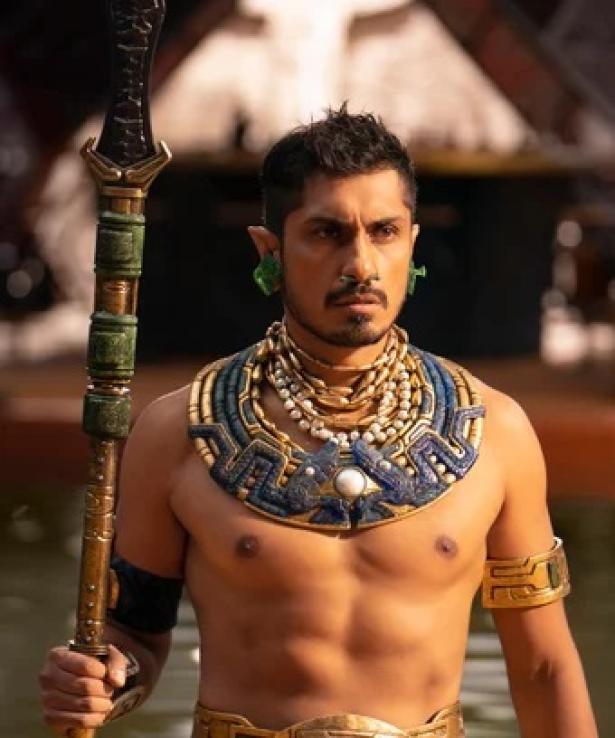 Tenoch Huerta Mejía is soaring. Since starring in the superhero epic Black Panther: Wakanda Forever, the Mexican actor has been trending for dancing with Lupita Nyong'o and going viral for his critique of Latine representation in media. “In Latin America, especially Mexico, we have a lack of representation. If you turn on the TV, all the people are white. Mexico looks on the TV like a Scandinavian country," he said in an interview with NBC News — and he’s not wrong.

Portrayals of Latines — both in Latin America and in the United States — are overwhelmingly (and violently!) white. This is by design. For generations, entertainment media has invisibilized and/or stereotyped Black and Indigenous people with origins across Latin America, just as its Spanish and mestizo white supremacist leaders have done in this region throughout history. This is why seeing the brown-skinned Huerta playing a Maya-inspired antihero is so powerful — and it’s also why it’s not surprising to me that it took U.S. Black entertainment, not Latine media, to tell dignified stories of Indigeneity in a major motion picture.

"It’s not surprising to me that it took U.S. Black entertainment, not Latine media, to tell dignified stories of Indigeneity in a major motion picture."

In the Marvel film, Huerta plays the feathered serpent God K’uk’ulkan, or Namor “to his enemies,” a character with both Maya and Aztec influences. His underwater kingdom, Talokan, came into existence after Spanish-invading colonizers decimated the Yucatán peninsula with disease. For the actor, the role isn’t important because it’s a representation of Latinidad but rather because it reflects the people, lands, and cultures that the colonization and hegemony that created Latinidad tried to eradicate. “To give this background to Namor, the Mesoamerican culture, especially Maya culture, they nailed it,” he said. As a historian and educator, I can see how this superhero tale reflects real life. In a history class that I teach with Javier Wallace through AfroLatinx Travel called “Mexico and Texas Entanglements,” we go over Mexico’s white supremacist racial goals in collaboration with the U.S. We cite the casta wars that cut the Indigenous population of the Yucatán peninsula by half, left Indigenous Maya and Yaqui people landless and enslaved by the white and mestizo ruling classes, and jailed or deported Maya people to Cuba and Puerto Rico to labor in sugarcane fields. Like these Indigenous communities, hundreds of thousands of African people were also on the Yucatán peninsula during this time, outnumbering the Spanish. Namor’s rage in Wakanda Forever hearkened to the real past of Spanish subjugation of African and Indigenous peoples that informs the present and the long-ongoing resistance to it.

It’s clear that Huerta knows this history, too. Throughout his career, he has spoken about the race and color hierarchy that exists in Latin America. In his forthcoming book, “Orgullo Prieto,” Huerta describes himself as a “prieto resentido,” a resentful dark one. It is a play on a phrase that Latin Americans who benefit from racism say to minimize the grievances of subordinated Black and Indigenous communities, yet it took other so-called “prietos” to open up space for Indigeneity to be seen on the Marvel big screen.

"The role isn’t important because it’s a representation of Latinidad but rather because it reflects the people, lands, and cultures that the colonization and hegemony that created Latinidad tried to eradicate."

When Black Panther premiered in 2018, many non-Black Latines bemoaned, “when will Latinos get their superhero?” But for Black Latines like myself, Black Panther was the superhero film that “Latines were waiting for” — Black Latines. In both the U.S. and in Latin America, Black people dressed up, lined up, and showed out for the movie. It was a chance to see ourselves in ways unbinded to normalized anti-Black tropes. And now, Black Panther: Wakanda Forever has given way to Indigenous world-making.

We chatted with Black and Indigenous Latin Americans and Latines about how they felt after watching Wakanda Forever and why they believe Black entertainment accomplished what Latine media has failed — and refused — to do: represent Indigenous communities in Latin America with nuance, care, and veracity.

This is a great question. It speaks to the rampant colorism in Latine culture and society. It took a Black writer with a social justice lens to integrate this character of Namor and humanize their stance.

"It took a Black writer with a social justice lens to integrate this character of Namor and humanize their stance."

From my understanding, the character in the comic is less generous than the version of Namor in the film. The amount of grace Black people are expected to give on film is borderline harmful. The fact that blue merpeople are experienced and welcomed as Latine while T'Challah and the folks of Wakanda were not tells us all we need to know.

"I have always considered Black Panther a part of the Indigenous representation in Marvel, as it depicts an Afro-Indigenous civilization that has thrived despite the colonialism around it."

The story of Namor goes beyond what Latinidad claims to be and embodies Indigenous Maya cultures. While it portrays the past of our Indigenous Maya civilizations, it also brings light to present representations such as “Laayli’ kuxa’ano’one,” from the Adn Maya Colectivo, as well as Pat Boy, Yaalen K’uj, and All Mayan Winik. This highlights the Indigenous and Black influences that Indigenous hip-hop embodies.

To frame Wakanda Forever as Indigenous representation and not the first Black Panther is to gesture toward the idea that Blackness and Indigeneity are mutually exclusive.

Don’t misrepresent me, Wakanda Forever is an important intervention in Indigenous people on-screen because it interrogates empire. It asks, what would happen if the Maya empire was given back their lands? How would Mexico’s Yucatec peninsula reunite with parts of Belize, Honduras, El Salvador, and Guatemala?

"Indigeneity, like Black life in this continent, lives in the currents of empire, the wake of neoliberalism, and in proximity to the shores of hope, kinship, death, betrayal, and resistance."

Wakanda Forever is allowing me to imagine an abundant future that refuses the trope that Indigeneity is dormant or minimal in the Americas. Indigeneity, like Black life in this continent, lives in the currents of empire, the wake of neoliberalism, and in proximity to the shores of hope, kinship, death, betrayal, and resistance. I appreciated that all this big-screen time was given to Black and Indigenous people. We spent three hours looking at our own faces. Univision, Telemundo, and Latine media overall had so much time, resources, and opportunities to make Indigenous people visible, and they have not. It’s simply not a priority; it’s not part of their agenda. They are in show business for their own interests, and those interests perpetuate a history of power and control.

It’s true there are just a couple seats at the proverbial table for Latine people, but non-Black and non-Indigenous Latines want to hold onto those seats for themselves and not make room for anyone else. They benefit from whiteness so they want to keep the status quo as it is. They want their seat at the white table, and they want the table to remain white. Instead of being truly transformative, like Black Panther, and creating other tables where we play by our own rules, they tell the same stories, with the same people, and leave Indigenous and Black Latin Americans out. They may occasionally throw these itty-bitty things in to make us feel like it’s progress, but really they have no interest in progress because they benefit from things as they are. The wildest part is that they then ask and expect us to support them. They want us to go see their movies just because they’re Latine.

"They benefit from whiteness so they want to keep the status quo as it is."

With the success of Wakanda Forever, they can no longer hide behind words like, “it’s not the moment” or “it’s not the time” or “the world is not ready.” Black Panther has shown that it is just a poor excuse for them wanting to perpetuate themselves and having no will whatsoever to put Indigenous and Black Latin American faces front and center.

Black Panther had to do what Lin-Manuel Miranda wouldn’t do. While Rita Moreno was telling Black Latines to “just wait a minute,” it took a Black action movie to take an Indigenous person from playing a domestic role to a principal character. This has never been reciprocated by Latine media in the U.S. or Latin America.

"Black Panther had to do what Lin-Manuel Miranda wouldn’t do."

"It’s interesting that Central Americans get written out."

While Maya people were in Mexico, they really ran Central America. So it’s interesting that Central Americans get written out. I would have really appreciated if Black Panther had Guatemalan Mayas, but it also tells you who is in the writing room.

Black Panther, in its contemporary reimagining by Black creators, doesn’t center whiteness — culturally, economically, or geographically — so it is the place in the Marvel Universe where Latin American Indigenous stories would exist and be thoughtfully represented. Marginalized stories are centered. Heroes are connected to their communities, not individual anomalies. Wardrobe choices are intentional. And the characters are complex.

In an interview, director Ryan Coogler described Namor’s role as “a character who leans into his trauma, who owns it, and is comfortable existing in a state of perpetual grief.” I think that’s a poignant, resonant framing for Black- and Indigenous-led narratives. Wakanda and Talokan are both vibranium-rich communities that have self-isolated for their own realization and preservation. It made me think of African and Indigenous peoples who formed maroon communities. With Black creators leading, reimagining the history of Black futures includes histories of prosperous Indigenous futures as well.

Black and Indigenous cultures are increasingly celebrated as part of Latinidad, but not Black and Indigenous people. For example, not long before this film premiered, Latine Los Angeles city council members were caught on camera making racist and colorist comments, while political pundits were trying to talk about a mythical cohesive “Latino vote.”

Huerta is and has been vocal about colorism in Latin American media. He is not alone in that critique, but the platform he has now is huge. I appreciate that we have these accessible pop culture examples to draw from when we speak about the limits of the term “Latino representation.” When talking about movies, it also creates nuance. Do we mean Latine/Latin American actors, like Lupita Nyong'o and Tessa Thompson, or just Latine/Latin American characters, like Namor and America Chavez? Those are related conversations about access and inclusion, but they are not the same. We can’t talk about “firsts” and “reinvention” and why this feels so important without acknowledging those who have been marginalized, overlooked, and excluded. I think this buzz has ignited deeper conversations, in multiple languages, in public spaces.