‘The US Can Still Become a Fascist Country’: Frances Fox Piven’s Midterms Postmortem

While many observers have breathed a sigh of relief over the rout of extreme election deniers endorsed by Trump, and his seemingly deflated campaign launch, the revered sociologist Frances Fox Piven has a more sombre analysis 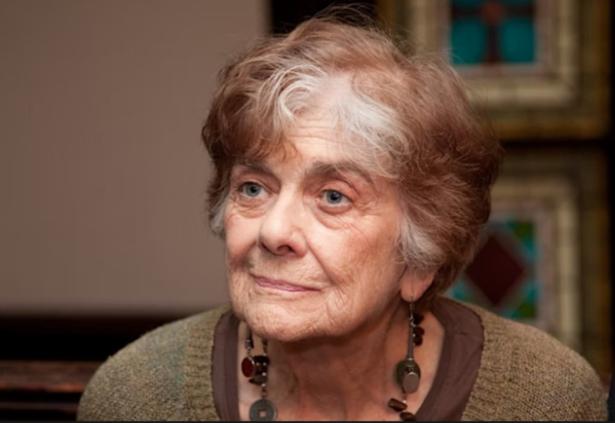 Frances Fox Piven has a warning for America. Don’t get too relaxed, there could be worse to come.

“I don’t think this fight over elemental democracy is over, by any means,” she said. “The United States was well on the road to becoming a fascist country – and it still can become a fascist country.”

The revered sociologist and battle-tested activist – an inspirational figure to those on the left, a bogeywoman for the hard right – is sharing with the Guardian her postmortem of the 2022 midterm elections and Donald Trump’s announcement of a 2024 presidential run. While many observers have breathed a sigh of relief over the rout of extreme election deniers endorsed by Trump, and his seemingly deflated campaign launch, Piven has a more sombre analysis.

All the main elements are now in place, she said, for America to take a turn to the dark side. “There is the crazy mob, Maga; an elite that is oblivious to what is required for political stability; and a grab-it-and-run mentality that is very strong, very dangerous. I was very frightened about what would happen in the election, and it could still happen.”

That Piven is cautioning against a false sense of security in the wake of the midterms would not surprise her many students and admirers. The co-author, with her late husband Richard Cloward, of the progressive bible, Poor People’s Movements: Why They Succeed, How They Fail, has for decades sounded the alarm.

She has raised red flags over the vulnerabilities of the country’s democracy, the inequalities baked into its electoral and judicial systems, and how poor Americans, especially those of colour, are forced to resort to defiance and disruption to get their voices heard. Now, with the Republicans having taken the House of Representatives, she foresees ugly times ahead.

“There’s going to be a lot of vengeance politics, a lot of efforts to get back at Joe Biden, idiot stuff. And that will rile up a lot of people. The Maga mob is not a majority of the American population by any stretch of the imagination, but the fascist mob don’t have to be the majority to set in motion the kinds of policies that crush democracy.”

To say that Piven has come to such a perspective through years of experience as a sociologist and anti-poverty warrior would be an understatement. She recently celebrated her 90th birthday, and her earliest political memories go back to the 1930s.

Her first is from 1939. It was prompted by the Russo-Finnish war which, though thousands of miles away, spilled out on to the streets of her neighbourhood. She was brought up in the New York borough of Queens by Jewish immigrant parents from Uzliany, in what is now Belarus.

“I was seven, so perfectly equipped to have a position on this issue,” she recalls. “Tutored by my father, I took the side of the Russians and fought with all the kids on the block.”

Her next vivid recollection relates to the death of Franklin Roosevelt in April 1945. “When FDR died, the whole street was bereft, almost sobbing. And these were people who didn’t talk much about politics, immigrants whose perspective was very narrow, getting by for another day, another week.”

Piven said she thought a lot about that communal mourning for FDR in the aftermath of the midterms with all their discord and rancour. “The thing about FDR was much bigger than partisan politics, anywhere,” she said.

That shared grief over FDR’s death seems worlds apart from the acrimony of today’s politics – all the more so after Trump’s declaration that he is running for the White House again. She talked about the former president’s “performative politics”, and the way it incorporates what she called “the human capacity for cruelty”.

Asked to point to an example of such cruelty, Piven referenced the attack last month on Paul Pelosi, husband of the Democratic speaker of the House, Nancy Pelosi. “This crazy man broke into the Pelosi home and attacked an 82-year-old man with a hammer, broke his skull. And there were actually politicians speaking to a mass audience and laughing at it.

“As thinking people, we don’t pay enough attention to the human lust for cruelty. We are at a point in American politics where those aspects of our nature are being brought to the fore; Trump has been doing that for a very long time, and we have to stop it or else it will continue to grow.”

What distinguishes Piven is not only her razor-sharp dissection of how American society fails its poor citizens, but also her determination to do something about it through activism. With Cloward, who died in 2001, she spearheaded rent strikes in New York’s Lower East Side through a group known as Mobilization for Youth, which she joined in 1962 and which became a prototype for Lyndon Johnson’s war on poverty.

More recently she helped to spawn in 2014 the progressive training program for movement organizers, Momentum. That in turn has seeded powerful grassroots networks such as the climate crisis disrupters the Sunrise Movement. 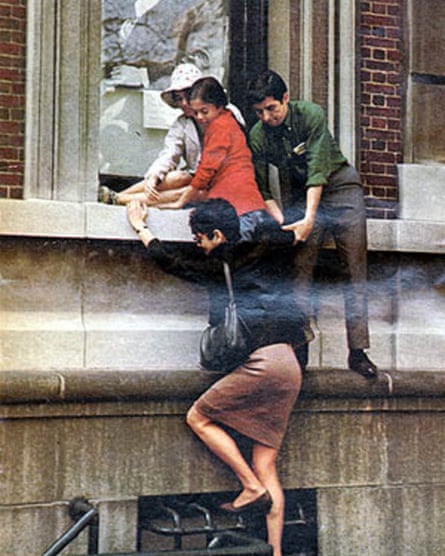 Piven scaled the side of the maths building at Columbia University to join student protesters in 1968. Photograph: Society for US Intellectual History

The lengths to which she has been prepared to go in her own activism is captured in a photograph from 1968. It shows Piven scaling up the side of the maths building at Columbia University in order to join student protesters occupying the premises.

“I was a fairly new assistant professor in the school of social work,” she explained. “An issue was bubbling among students and younger faculty about Columbia’s immoral, noxious policies with regard to the Vietnam war and participation in research for the defense department.”

So up she clambered to join the occupation. No matter that in a couple of weeks she was due to face a crucial faculty vote on whether or not she would be granted tenure.

The photo was published by Life Magazine and shortly after that, her troublemaking notwithstanding, she did get tenure. Being Frances Piven, however, she promptly quit the Ivy League university and transferred to Boston University, and from there to the Graduate Center of the City University of New York, where she remains a distinguished professor emerita.

That leaning towards agitation – what she calls the power of “dissensus” as opposed to “consensus” – still burns strongly in her. In her academic writings, as in her on-the-ground organizing, she sees movement politics and seeking change through the ballot box as essential partners.

“I don’t think any large-scale progress has ever been made in the United States without the kind of trouble and disruption that a movement can cause by encouraging large numbers of people to refuse to cooperate,” she said. “But movements need the protection of electoral allies – they need legislative chaperoning.”

She sees that dual model applying to today’s struggle to confront global heating. “The action on the climate crisis has to defeat the fossil fuel industry which in turn is closely connected to many politicians. You have got to break that, and the only way I think in American history that kind of power has been overcome is by just shutting things down.”

Her championing of such acts of defiance have made her a popular hate figure for the far right. Security guards were posted outside her university office after the demagogue broadcaster Glenn Beck published a photoshopped image of her with her hair on fire on the front page of his website TheBlaze.

“Beck blamed everything on Richard and me,” she recalled. “Are you kidding! I wish I could claim that credit.”

It’s been a long, rich life of political thought and action. I ask her to stand back a little, take in the big sweep. How does America look today perceived through the lens of her years?

“It’s a very strange time in history,” she said. “It’s not only the strangeness of our politics, it’s global warming, the seas are rising. I just had yet another booster shot. It’s very weird – I do not make predictions.”

It sounded like her answer was completed. But after a pause she started up again.

“I do think that the only way to live is to live in politics. To me, it’s an almost life-transforming experience – to be part of the local struggle. Even a dangerous struggle. You make friends that never go away. You see people in their nobility, and you find your own nobility as well. I would not trade my life for anything.”

Ed Pilkington is Chief reporter of the Guardian Twitter, email

From voting rights to climate collapse to reproductive freedom, the Guardian relentlessly reports the truth, uncovers injustice and exposes misinformation. Fearless, independent journalism is essential to building a better world. We are raising $1m to fund our journalism in 2023. If you can, please consider a year-end gift to the Guardian.