Why Saudi Arabia Is So Quiet About Iran’s Protests

The kingdom’s rulers may have managed their own social pressures better, but they’re wary of the tumult that’s shaking their neighbor. 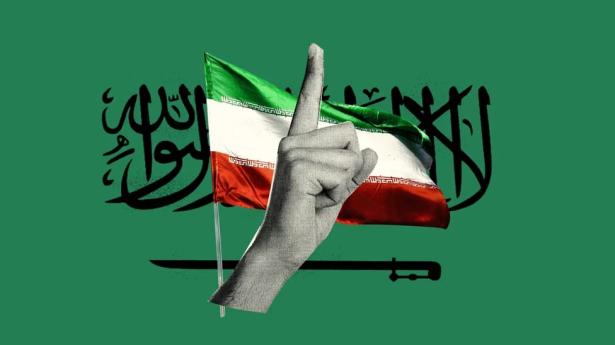 Expressions of support for Iranian protesters have been pouring in from around the world—from leaders such as President Joe Biden, the former first lady Michelle Obama, French President Emmanuel Macron, and New Zealand Prime Minister Jacinda Ardern—as the protests, well into their second month, remain defiant and have even gained in intensity. But aside from some media coverage, those nations closest to Iran, its Gulf neighbors, have remained conspicuously silent. Most striking of all is the lack of any official response from Saudi Arabia—which one would expect to be cheering along the popular revolt against a regime that Riyadh considers its archenemy.

The Saudi silence stems from lessons the kingdom absorbed during the events that turned the Persian monarchy into an Islamic Republic: Wait until the outcome is clear, and then wait some more. The protests that brought down the shah in 1979 unfolded over more than a year. Although today’s protests have become the greatest challenge to the Islamic Republic since that time, no rapid conclusion seems likely; hence the Saudi policy of watchful waiting. Back then, the Saudis also misjudged the outcome after their ally the shah was deposed, because they believed that they could work with his successor, Ayatollah Ruhollah Khomeini—only to find he was an adversary. Whatever the outcome this time, Saudi Arabia seems certain to reserve judgment while buttressing its own position.

Share this article on
Kim Ghattas: A whole generation revolts against the Iranian regime

The House of Saud may consider that position already better secured by the recent reforms introduced by Crown Prince Mohammed bin Salman. In important respects, the kingdom has leapt into the 21st century: Women can drive, the hijab is no longer enforced, and the religious police have largely disappeared. Saudi Gen Zers of both sexes can mix in public, dance at raves, go to movie theaters, and cheer at football stadiums. The contrast with Iran is sharp. There, the Gen Zers are rising up against a repressive, ideologically driven regime that continues to enforce an outdated Islamic lifestyle, depriving them of fun and pleasure while failing to provide them with jobs and opportunities.

So if the Saudis are studiedly saying little, that silence may be underpinned by a quiet satisfaction. Right now, their record of managing such social pressures looks a lot better.

The events of today represent a stunning reversal of the situation in the 1960s, when the shah reportedly sent King Faisal bin Abdulaziz Al Saud a series of letters urging him to modernize and “make the schools mixed women and men. Let women wear miniskirts. Have discos. Be modern. Otherwise I cannot guarantee you will stay in your throne.” The king wrote back telling the shah he was wrong: “You are not the shah of France. You are not in the Élysée. You are in Iran. Your population is 90 percent Muslim.”

Such a candid and cordial exchange between the rulers of the two countries is hard to credit now, but before 1979, Saudi Arabia and Iran were regional partners—twin pillars in America’s Cold War efforts in the Middle East to contain the Soviet Union. The two monarchies—one Sunni, the other Shiite—were even allies in an intelligence partnership known as the Safari Club, which ran clandestine operations and fomented coups around Africa to roll back Soviet influence.

Given this relationship, the Saudis initially viewed the protests that engulfed Iran after 1977 as an internal affair, and refrained from comment. But as the movement to depose the shah grew, both Riyadh and Washington worried that a pro-Soviet regime dominated by leftists and nationalists would take over.

In early 1979, Saudi Arabia’s Crown Prince Fahd bin Abdulaziz Al Saud openly expressed support for the shah as Iran’s legitimate ruler. But by mid-January, the shah was gone, and within two weeks, Khomeini flew back triumphantly to Tehran. The secular revolutionaries thought they could exploit the ayatollah’s religious support and control him. They were wrong. Khomeini effectively hijacked the revolution and turned Iran into an Islamic Republic.

Saudi Arabia moved quickly to accept the outcome, relieved to see a man who spoke the language of religion rise to the top instead of leftist revolutionaries. Saudi Arabia congratulated Iran’s new prime minister, Mehdi Bazargan, and lauded the Iranian revolution for its solidarity with “the Arab struggle against the Zionist enemy.” In April, Prince Abdullah bin Abdulaziz Al Saud, the kingdom’s future ruler, spoke of his relief that the new Iran was “making Islam, not heavy armament, the organizer of cooperation” between their two countries.

Before long, though, the Saudis were facing an insurrection from their own zealots. In November 1979, religious extremists laid siege to the Holy Mosque in Mecca for two weeks. The deeply conservative kingdom had just begun relaxing some of its strictures with the recent introduction of television and cinemas. Those controversial advances now came to an abrupt end. Fearing that it might meet the same fate as the shah, the House of Saud staked its future on Sunni puritanism, further empowering the clerical establishment and pouring money into the religious police.

And little did the Saudis know what Khomeini had in store. Soon, the ayatollah was exporting the Islamic revolution around the region, wielding religion as a weapon and challenging the House of Saud’s position as leader of the Muslim world. If the Saudis had read Khomeini’s early writings, they would have had some inkling of his disdain for them. To counter Iran’s efforts to extend its influence, the Saudis promoted the kingdom’s brand of ultraorthodox Sunni Islam from Egypt to Pakistan.

As the Iranian revolution transformed the region, the shock of suddenly facing an implacable enemy instilled in the Saudis a visceral fear of popular uprisings—either within their own kingdom or in any neighboring country. This dread was still uppermost in their mind in 2011, when they watched millions of protesters throng the streets to bring down another American-backed leader, this time in the Arab world—Egypt’s Hosni Mubarak—during the Arab uprisings.

Today, saudi arabia and its neighbors would welcome a change of leadership in Iran, but uncertainty about the outcome governs Saudi caution. The protests are unlikely to lead to the wholesale overthrow of the ayatollahs in the short to medium term. So will the regime attempt to defuse internal pressures by giving in to some of the demands, reining in the religious police, focusing more on Iran’s domestic politics and economy and less on regional hegemony? Or will the current leadership come down hard on the protesters, causing the regime to step up internal repression and support for proxy militias in the region?

Given the pressure at home, the Islamic Republic may well unleash some of its allies to launch diversionary attacks against regional adversaries. Already, in September, Iran attacked Kurdish areas in northern Iraq with ballistic missiles. In October, Saudi Arabia shared intelligence with the U.S. that warned of an imminent attack on the kingdom—Riyadh is concerned that its currently fraught relationship with the U.S. could make it more vulnerable to an attack. (The October report contained no specific details, but the U.S. did raise the level of alert of its forces in the region.)

The official Saudi silence about the protests belies a somewhat more active posture: The royal court is thought to be funding Iran International, a London-based Persian TV channel, set up in 2017 as an opposition station and now beaming images of the protests back into Iran. Although satellite dishes are illegal, an estimated 70 percent of Iranian households own one, and Iran International has become a vital source of information inside the country and for the diaspora.

The Islamic Republic has repeatedly called on Saudi Arabia to shut down the station. “This is our last warning, because you are interfering in our internal affairs through these media,” the commander in chief of the Islamic Revolutionary Guard Corps, Hossein Salami, said last month. “You are involved in this matter and know that you are vulnerable.” The warning was repeated by the supreme leader’s military adviser, Major General Yahya Safavi, and Iranian authorities arrested a woman accused of links to the station.

The channel also reports on news from the region and from inside Saudi Arabia, where life for young Saudis has been so transformed in recent years. In early March 2020, the kingdom organized a “Persian Night” of music in the celebrated desert venue of Al Ula, inviting such major Iranian figures as the singer Andy to perform even as they’re banned from performing in their own country. Broadcast on Iran International television, the event was emblematic of the House of Saud’s aptitude at reading the times and social trends—in contrast to the limitations of Iran’s rulers, both the shah and the ayatollahs. The Saudis like to draw such comparisons to show how Iran is lagging behind.

But inside the kingdom, the new social and cultural reforms, and the rapid pace of their implementation, are not to everyone’s taste in the conservative monarchy—which is why the new freedoms also have strict limits. Under bin Salman, Saudi Arabia has become more authoritarian. Aside from the high-profile killing of the journalist Jamal Khashoggi, murdered in the Saudi consulate in Istanbul, the kingdom has cracked down on anyone remotely critical of the changes. These include such minimal-seeming threats as a young Saudi mother of two studying in Leeds who was jailed while visiting home for retweeting Saudi dissidents and spreading “false” information, and a U.S.-Saudi dual national who was sentenced to 16 years in prison after sending out critical tweets.

Looking at events in Iran, the Saudi crown prince may be congratulating himself for defusing the social discontent that had been building inside the kingdom for years. But he will likely continue to do so quietly—notwithstanding Iran International’s coverage—because the ultimate lesson from 1979 is that geopolitical fallout from the coming changes within Iran will wash over the region. And any interregnum will be messy.

Kim Ghattas is a contributing writer at The Atlantic and a senior nonresident fellow at the Carnegie Endowment for International Peace.

Be surprised. Be challenged. Be a subscriber.

You can cancel anytime.