Motherboard obtained footage of Ye making bigoted statements about Jewish people and bizarre claims about "fake children," as well as describing visions of "kinetic energy" cities sent to him by God. 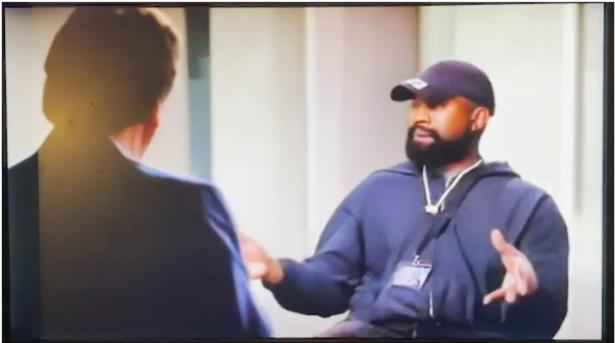 Fox News recently aired a two-part interview between Tucker Carlson and Ye, the artist formerly known as Kanye West. Motherboard has obtained portions of the interview that were edited out of the final broadcast. These include numerous antisemitic sentiments from Ye, a strange and lengthy digression about “fake children” he claimed were planted in his house to manipulate his own children, and a statement that he’s vaccinated against COVID-19.

Carlson used the interview, which was presented as a piece of landmark television, to hit on a few of Fox News’ favorite boogeyman, with Ye’s enthusiastic participation: the Clintons, former President Obama, COVID restrictions, and, of course, the Kardashians. But what the Tucker Carlson team chose to leave out is just as revealing.

In the version of the interview that made it to air, Ye described what he said was pressure not to support Donald Trump when the latter was a candidate, called the singer Lizzo “clinically unhealthy” for her weight, and tried to explain his decision to appear at Paris Fashion Week with conservative pundit Candace Owens in matching “White Lives Matter” shirts. Carlson praised the interview as “interesting, deep, provocative,” and aired nearly two full hours of it over the course of two nights.

“Do you feel at times you were manipulated by political forces through your wife?” Carlson asked hopefully at one point, in a fairly representative piece of footage. (Ye responded that he was unaware of how close Kim Kardashian was to “the Clintons” during the time they were married.) A simple statement of fact from Ye—“I was vaccinated”—was edited out of a part of the conversation about COVID; Carlson has repeatedly used his show to air false and dangerous claims aimed at discouraging his viewers from getting vaccinated.

The other footage that didn’t air specifically includes numerous asides about Jewish people. Ye has recently displayed an intense negative fixation on Jews; both his Instagram and Twitter accounts have been locked in recent days because of Ye’s antisemitic statements. On Friday, October 7, he appeared to suggest in an Instagram post that the rapper Diddy is controlled by Jews. Not long after, he promised in a tweet that he would go “death con 3” on “JEWISH PEOPLE.”

“When I say Jew, I mean the 12 lost tribes of Judah, the blood of Christ, who the people known as the race Black really are,” Ye added. “This is who our people are. The blood of Christ. This, as a Christian, is my belief.”

The statement mashes up a few different claims. Sanger was indeed a racist and eugenicist, a stance the organization has since denounced; claims that Planned Parenthood exists to kill Black infants in the womb are common across several different conspiratorial spaces. Ye was also referring to the claim, unsupported by historical evidence, that Black people are the “real” Jewish race, which is often used to promote antisemitism. (The Southern Poverty Law Center has a broader explanation of this particular tangled claim, which is often, but not always, associated with the Black Hebrew Israelites, a movement that originated in the 19th century; some Black Hebrew Israelite sects believe that non-Black Jews are impostors or usurpers of “true” Jewish identity.)

In another aside about Jews that didn’t make it to air, Ye used a strange metaphor when talking about Black people judging one another, telling Carlson, “Think about us judging each other on how white we could talk would be like, you know, a Jewish person judging another Jewish person on how good they danced or something.” He paused. “I mean, that's probably like a bad example and people are going to get mad at that shit.” A few moments later, he added, “I probably want to edit that out.”

At another point, when complaining that his children are going to a school that celebrates Kwanzaa, Ye added, “I prefer my kids knew Hanukkah than Kwanzaa. At least it will come with some financial engineering.” (The belief that Jews control the financial system is one of the oldest and most deeply-rooted antisemitic claims. It’s unclear if that’s what he meant by “financial engineering,” a term generally associated with the creation of exotic financial instruments.)

In one more aside, Ye told Carlson that he was going to be “the first Latino president.” That statement was aired, but it was followed by something that wasn’t. “I just, I trust Latinos when I, you know, when I work with them,” he told Carlson. “I trust them more than—” he paused. “I'll be safe, certain other businessmen, you know.” (Carlson did not ask which businessmen those might be.)

Carlson’s program also didn’t air a strange claim from Ye that “fake children” had been placed in his house to manipulate his children.

“I mean, like actors, professional actors, placed into my house to sexualize my kids,” he told Carlson. He referred to the “so-called son” of an associate, seemingly to imply the child was fake. “We don't, we didn’t even believe that this person was her son because he was way smarter than her, right?” (Ye has spoken frequently about living with bipolar disorder and experiencing manic episodes. In 2019, he discussed how he experiences these with David Letterman, telling him, “When you’re in this state, you’re hyper-paranoid about everything, everyone. This is my experience, other people have different experiences. Everyone now is an actor. Everything’s a conspiracy.”)

Carlson didn’t ask any followup questions or redirect this line of thought, allowing Ye to lead directly into another claim, which also didn’t air, about one of his children being “kidnapped” on her birthday so that Ye was not able to see her. That claim is part of what seems to be his ongoing, and very public, obsession with being treated unfairly or unequally in his children’s lives, and in the midst of a heated custody battle with Kim Kardashian.

“Everyone saw in broad daylight these public figures kidnap my Black child on her birthday,” he told Carlson. “I did not know the location of the birthday party and Travis Scott had to give me the address. When I showed up, they were so frazzled. If that's not the most Karen-level thing, to feel like you can take a Black child and not give the father the address. This is the way people are treated when they get out of prison, when they go to prison. And 100 percent, I am in a glass prison or else I'd be the one with the say so over where my children go to school.”

Ye has repeatedly claimed on Instagram that his child Chicago was not permitted to see him on her birthday, something that Kim’s sister Khloe Kardashian responded to in the comments of one post. “Again with the birthday narrative,” she wrote. “Enough already. We all know the truth and in my opinion, everyone's tired of it. You know exactly where your children are at all times and YOU wanted separate birthdays. I have seen all of the texts to prove it."

A lengthy piece of the interview that was also not broadcast involved Ye’s ruminations about the death of Virgil Abloh, the fashion designer who was his one-time friend, and who died in November 2021. Ye accused Louis Vuitton, where Abloh worked at the time of his death, of “killing” Abloh and said he was “beefing” with the company. (Abloh died of cancer at just 41 years old.)

Ye also made a strange comment, which Carlson didn’t air, about his plans to create “kinetic energy communities” built with “free energy,” a technology not currently available to human beings.

“I have visions that God gives me, just over and over, on community building and how to build these free energy, kinetic, fully kinetic energy communities,” he told Carlson, “where we impress—we put the least impression on the earth. We're not building the new New York skyline cockfight. That we are humble in the way that we present ourselves. We’ve got to rethink who we are as a species.” Including this portion of the interview might have helped audiences understand Ye’s state of mind, and general grasp on observable reality. (While Ye has said that he stops taking his medication for periods of time, in an Instagram post earlier this year, he also called it “dismissive” to “say I’m off my meds anytime I speak up.”)

Carlson closed his segment on the Ye interview by declaring that the artist—whose erratic behavior has for years been at the center of discussions about mental health and how Black men with mental health issues are treated— is “not crazy” and “worth listening to.” He also added, approvingly, that Ye was “getting bolder” in what he has to say.