The Joy of the South: We Were Not Born To Suffer

We were not born to suffer, neither Argentines, nor French, nor any other human being on this earth. We were born precisely for the opposite, to free ourselves increasingly from all pain and suffering by humanising the world, which should be the central goal of our existence. 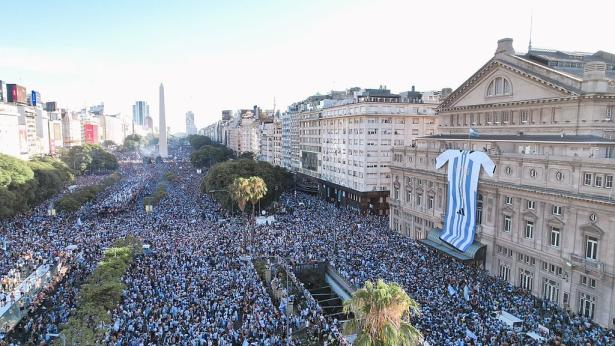 Celebrating at the Obelisco after the Argentine national team won the World Cup at the Qatar 2022 World Cup (Image by GCBA via Wikimedia Commons,(Creative Commons Attribution-Share Alike 2.5)

Argentina’s football team defeated France in the final of the 2022 World Cup. In an electrifying match, which was full of talent and emotions, the Albicelestes got a well-deserved victory against a team that, a priori, was one of the main candidates to be crowned champion. But the passion and concerted effort of the eleven coached by Leonel Scaloni off the pitch and led by Lionel Messi on the pitch was more than enough.

Likewise, the overwhelming support of those present in the stadium and of a large part of the inhabitants of the global South, provided the necessary popular energy for Argentina to lift the golden trophy in the name of the impoverished and humiliated, the plundered and discriminated against of the world.

As a symbol of the paradoxes to which we are accustomed today, it was those who wore the French jersey who best represent, by their appearance and memory, the past (and present) of colonial plundering.

After the changes made by their coach, with a few exceptions, the players on the field displayed on their skin their condition as children of the profuse immigration from territories formerly under the yoke of French imperialism.

Unlike previous times, when economically powerful countries recruited talented players from the South for their national teams by giving them an identity card, in this World Cup, the players who wore the blue jersey were almost all born in France. That’s right, in a France on the periphery, charged with poverty and discrimination.

A condition not dissimilar to that of many of their Argentine rivals, who in their dreams of glory climbed the steep ladder from the slums or lower middle class to the football elite.

As for the French team, is its integration a sign of the multiculturalism that today extends to the entire planet or is it still a reminder of the painful biography of those who forcibly emigrated from their places of origin in search of better living conditions? Or is it perhaps both? What is certain is that it is possibly a sign of the resistance that exists in the look itself to accept that young people with black skin today sing the once revolutionary anthem La Marseillaise with an emotion close to that of their white-skinned fellow countrymen.

Possibly also, if one manages to transcend the boundaries of mere perception, one can intuit a similar cultural mix in Argentine players. Or are not haughtiness and unity a legacy of our native peoples and passion and dramatism a contribution of those long-suffering Italian immigrants in the twilight of the 19th century? Is not technique and planning an important legacy of our fellow countrymen of Nordic origin, while tenacity and a certain stubbornness are undeniable traces of the Spanish coat of arms? While nobility and loyalty are undeniably characteristics of Arab culture in these lands, the love of knowledge and a certain messianic spirit are part of what Jewish immigration gave to the Argentine people, just as picaresque is part of the heritage of the Andalusians who came to settle in this territory.

If there is something that can be considered “typically Argentine”, it is not the mate or the custom of roasting meat, but the combination of all these virtues and skills, forging an inventiveness and a remarkable variety of options capable of overcoming adversity, which was once again demonstrated by their footballers.

We were not born to suffer

The variations in the circumstances of the game sent Argentina’s fans on a merry-go-round of emotions. From the anguish of the initial unthinkable defeat against the Saudi Arabian team to the imperious need for victories against Mexico and Poland to avoid being eliminated from the tournament, passing through the triumph against Australia, the agonising victory over the Netherlands and the somewhat more relaxed scoring against Croatia, the shared faith in the footballing abilities of the national team was at times the mast that held the shaken hearts in the midst of the storm of goals for and against.

And what can we say about the defining match against France, in which twice the result seemed to be a foregone conclusion! Ten minutes before the end first, when the two-goal lead was apparently enough to crown them champions, and three minutes before the end of extra time, when no one believed it possible that France could even the elusive three to two. Late in the game, a dangerous attack in which a striker came face to face with the Argentine goalkeeper stopped everyone’s heart for a moment, bringing Emiliano “Dibu” Martinez’s incredible save into the penalty shoot-out phase.

The prayer card of “San Dibu, protector of the goal”, which went viral on social media shortly before the final kicks, was the most complete demonstration of the religiosity present in the town. Far beyond the frameworks dictated by the formal confessions or their secularism, millions of Argentines lit candles, burnt incense, repeated mantras, labelled a former president as the main bearer of bad luck (“mufa”, “yeta”, in Buenos Aires slang) and turned to the most diverse cabals and promises to pray for Argentina’s triumph.

Finally, the cherished dream came true, paying tribute to popular fervour and the inner faith and skills of a young man unconcerned with conventions, brazen and insolent with hierarchies, who displayed his individual award for best goalkeeper of the tournament like an erect phallus, before the looks of sheikhs, emirs and other excellencies.

Argentina had been crowned champions of the 2022 World Cup. Despite the indescribable happiness, perhaps overwhelmed by the emotional storm they had to go through, also experienced by millions of their fellow countrymen, many managed to explain: “We were born to suffer”, concentrating in that phrase the very history of a territory torn apart by multiple forms of violence.

Despite the joy, recognition and gratitude for the football result, we do not agree with this unfortunate sentence. Moreover, we consider this aphorism as a precedent for future and recurrent defeats, a true amulet of misfortune.

Or will we have to continue to accept that so many people fall below standards of existence worthy of the human condition? Repeating the slogan that suffering is connatural to life represents an affront to the possibility of transforming the given conditions, of rebelling against the naturalisation of inherited precepts that do nothing to improve our lives and those of our peoples.

We were not born to suffer, neither Argentines, nor French, nor any other human being on this earth. We were born precisely for the opposite, to free ourselves increasingly from all pain and suffering by humanising the world, which should be the central goal of our existence.

Let us hope that everyone’s contribution will bring us closer to this achievement of the species, so that together we can all raise the glass.

Javier Tolcachier is a researcher from the World Centre of Humanist Studies, an organism of the Humanist Movement. Mail: javiertolcachier@disroot.org Twitter: @jtolcachier

Pressenza is a space open to the expression of the social base. We endorse a universalist humanist perspective and actively promote cooperation agreements and partnerships with other agencies, as well as reciprocal links with portals, platforms, news and communications media of specific communities and cultures. Pressenza is part of an extensive network of new media that achieves global reach for local proposals while they are supplied information with the material provided by the agency.

Pressenza consists of volunteers with extensive experience in communication, social activism, cultural and academic fields. The agency is independent from any economic interest, the basic condition for its autonomy. We are columnists, reporters, photographers, graphic designers, videographers and translators on five continents who contribute our professional work without financial compensation.