The Real GOP Steps Forward – Jan. 06 They Failed, Now They Are Stopping the Functioning of Congress

The GOP is a failed state, Donald Trump is its warlord. The 20 rebels are saying they rule the GOP, which they do. The narrowness of the GOP majority, which they are responsible for, brought the fracture into the open in a way that is unbridgeable. 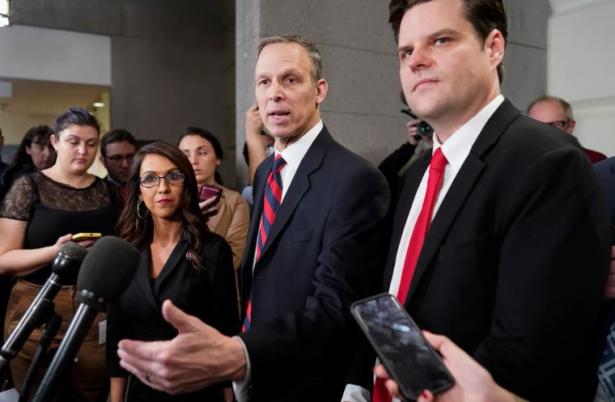 Today’s and yesterday’s events were predictable, unbelievable and hilarious all at once. One increasingly common refrain from analysts and reporters is that the issue between Kevin McCarthy and his now-20-plus rebels is really personal. They don’t trust him, will never trust him. Perhaps. But this personalizing analysis ignores the larger dynamic that has been unfolding in the Republican Party for more than a decade. We might trace the roots of the present moment to Barry Goldwater, to Newt Gingrich, to the Tea Party, or to Donald Trump. But the key turning point here is 2008 and 2009 when the GOP ceased to function as a center-right party of government and became something more like the sectarian revanchist parties that have long existed on the margins of European parliamentary politics.

But the U.S. isn’t a parliamentary democracy. Its constitutional structure makes it all but inevitable that two coalitional parties will trade power back and forth. This shift in the GOP happened along with a deep fracture, and an inevitable one in an American context. The House Freedom Caucus was nominally formed in 2015. But it was an institutionalization of the Tea Party radicalism that had its roots in the shift from Republican to Democratic rule in 2008 and 2009.

From 2011 onward the factions of the GOP were in a tacit alliance. The party’s mainstream wing remained in nominal control through leaders including John Boehner, Eric Cantor and Kevin McCarthy. But, in fact, the conference was run by what became the Freedom Caucus. It was a functional equilibrium. The Freedom Caucus couldn’t govern in its own name. And the Boehner types couldn’t run the House without accepting the Freedom Caucus’s dictates. This is often described as the origins of a Republican civil war. But that’s not quite right. It was a functional if acrimonious division of labor. Rather than a “civil war” a better metaphor came from Will Saletan, who called the GOP a failed state which found its warlord in Donald Trump.

Trump’s great insight — certainly instinctive more than analytic — was that double act and subterfuge were unnecessary. You simply tear off the scab and run the GOP — openly — from the Freedom Caucus. That is what the Trump presidency was. It’s no accident that his top allies on the Hill and numerous key members of his administration came from the House Freedom Caucus.

Donald Trump revealed more than he changed. During the Obama years, most D.C. conventional wisdom treated the House radicals as crazies who were loud but basically marginal to the GOP. That wasn’t real politics. That was grandstanding and performative nonsense. But, in fact, that was the Republican Party. That was who ran it. And when a presidential candidate emerged ready to run openly on their platform, he won hands down.

It’s not the case that every Republican member of Congress is the same as Jim Jordan or Matt Gaetz. But virtually all of them rely on a coalition of voters that wants to support Jim Jordan and Matt Gaetz. That’s really all that matters. The GOP is a balkanized party made up of elected officials who either are Jim Jordan or aren’t willing to cross Jim Jordan.

So, as Saletan famously put it, the GOP is a failed state and Donald Trump is its warlord. Now Trump is at least partly pushed off the stage. Trumpism — which is really Freedom Caucusism — gave Republicans their dismal result. What is really happening with the 20 rebels is that the Freedom Caucus, the Trump caucus, is saying again that they rule the GOP, which they do. The narrowness of the GOP majority, which they are responsible for, has brought the fracture into the open in a way that is as yet unbridgeable.

Since 2015 and especially since January 2019, Kevin McCarthy’s theory of the case has been that he can solve the problem John Boehner and Paul Ryan never could. His solution? Stop arguing with the Freedom Caucus and give them whatever they want. But it didn’t work. We hear all of these complaints about how they can’t trust Kevin McCarthy, the rebels can’t trust Kevin McCarthy. The reality is that they can trust him to give in to literally every far-right demand. But it hasn’t been enough. Because at heart the GOP is now a burn-it-down party. They want to break things. There are no chits McCarthy can give them. Because breaking things is the goal. At this moment the thing is Kevin McCarthy. But that’s just momentary.

The contingencies of the moment have brought the underlying fact of the GOP to the fore: It’s a party of breaking things. They can’t get past that.

[Josh Marshall (@joshtpm)  is the founder and Editor-in-Chief of TPM.]