A Jan. 6 Comic Book Asks the Terrifying Question: What if the Coup Had Worked?

“1/6” imagines the dystopian MAGA future that almost was. 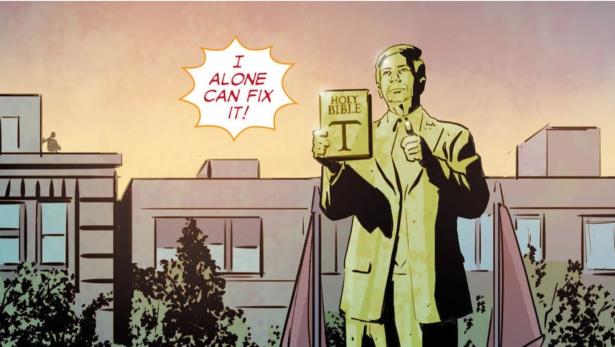 This content comes from the latest installment of our weekly Breaking the Vote newsletter out of VICE News’ D.C. bureau, tracking the ongoing efforts to undermine the democratic process in America. Sign up here to get it in your inbox every Friday.

The first wave of the mob breaks into the Capitol and ascends the stairs from the first floor to the second. Capitol Police Officer Eugene Goodman backs up to the top of the steps to try and divert the marauders. Goodman tries to get the crowd to go left. Instead they go right, overrunning him, and happen upon Vice President Mike Pence, who’s just off the Senate Floor. It’s a disaster.

This a nearly-real scene from new, four-part comic series “1/6“ from Harvard law professor Alan Jenkins and author and activist Gan Golan.  It’s a speculative telling of the January 6 insurrection and coup attempt in an oppressive and authoritarian world where the mob, and Donald Trump, succeeded. (You’ll be able to find it on Amazon, in comic shops and in book stores starting on Jan. 8.)

This seemed like a great way to observe the second anniversary of the attack. So, in between failed House Speaker votes, I called up the authors. Our chat has been edited for length.

What was the inspiration for this project? Why did you decide that “1/6” had to be in comic book form?

ALAN: I found myself waking up in the middle of the night in a cold sweat worrying about the threats that still remain to our democracy and watching cynical pundits and politicians trying to spin and negate it and try to disappear the events of Jan. 6. So I felt the need to tell that story in a way that would be accessible for everyday folks, that doesn’t require advanced education or sophisticated English literacy skills, that would actually be interesting and engaging to consume. And I’m also a comic book geek from way back. And so graphic novels seemed like the right way to go.

GAN: Yeah, we’re not just trying to condense the 850 page final report of the January 6 committee down and then illustrate it. We’re using this speculative fiction approach which allows us to get into some very profound issues at the heart of what happened on Jan. 6. It isn’t just about what happened. But what could have happened had they succeeded. What were the intentions of this movement? And what are the ongoing risks to our democracy? The reality is that the insurrection itself didn’t end on Jan. 6, and given a chance they might try again, or try to do something even worse.

There’s a “Man in the High Castle” vibe to this whole thing, right? “What if the bad guys had won?”

ALAN: Well, that’s a long tradition of the dystopian alternate reality in comic books. This is a metaverse of madness for our democracy in some ways. We took our inspiration from the best of speculative fiction. Whether you look at George Orwell's “1984” or Margaret Atwood’s “The Handmaid’s Tale,” or Octavia Butler’s large body of work. Those are cautionary tales. They are historical markers, they’re cultural calls to action. And “Man in the High Castle” certainly fits well within that tradition. And we really are hoping we’re at least aspiring to reach that kind of storytelling.

You notice right away in your version, Mike Pence was actually hanged.

GAN: And you see the attempt to blame others for the crime. But the disinformation and revisionism coming from the seat of government hopefully will sound eerily familiar to people. That’s because we used some of the very same disinformation tactics that Tucker Carlson and Donald Trump and others have used. In our story, government drones and political apparatchiks push a narrative that’s pretty close to our real American life. And we’re kind of showing what would have happened, had they succeeded. In the story it looks surreal and bizarre to us, but actually…is it?

I guess all good dystopian fiction comes with a warning.

GAN: When you see a version of the intentions of the MAGA organizers, you suddenly understand the severity of their vision and how contrary it is to the values that most of us hold. You can’t do that in a documentary. The power of all dystopian fiction is it gives us that warning of the reality we want we have to work to avoid. It’s a call to action. It’s meant for us to deeply consider the crossroads that we’re in and make much clearer choices about the country that we want to live in.