Nothing Is Worse Than Silence in the Face of Aggression

The Russo-Ukrainian War and the rest of us. 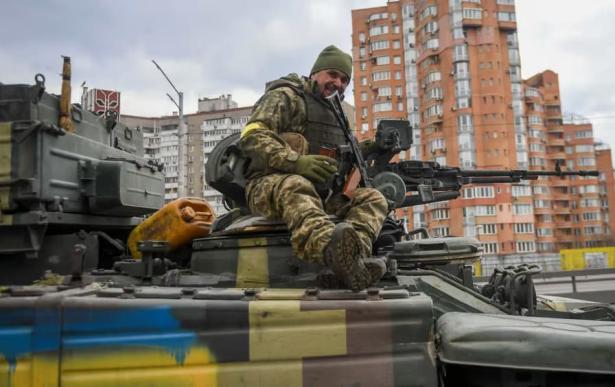 Friend or foe? Ukrainian soldiers on a tank pass along the road on March 9, 2022, in Kyiv.,Murat Saka / dia images via Getty Images

The announcement of the Ukraine Solidarity Network is a small step in breaking a strange combination of silence, ambivalence, and complicity within some left-leaning circles regarding the Russian aggression against Ukraine. Code Pink, for instance, which is outspoken on international affairs, falls into the “ambivalent” category, criticizing the Russian invasion—but not supporting Ukrainian resistance. Black Alliance for Peace is an example of a group that is complicit through its support of the invasion.

Particularly since the end of the Cold War and the turn towards capitalism within China, much of the US left and progressive circles have found themselves adrift in navigating the stormy seas of neoliberal globalization and growing right-wing authoritarianism. Given the crimes of the United States—domestically and internationally—it came as no surprise that a great deal of the attention of left and progressive forces has been on the posture and practice of the US government (and its allies). This approach, however, began running into complications when governments in the Global South that had appeared to have embraced a left, anti-imperialist approach, began embarking on approaches that were either complicit with neoliberal capital and/or undertook repressive measures against their populations—in the latter case in response to popular protests. Zimbabwe under former President Robert Mugabe is a case in point; the Ortega regime in Nicaragua is a more current example. In both cases, the left-wing “bona fides” of these regimes covered over an increasingly authoritarian approach, often mixed with corruption.

In response to the history of US interference in the internal affairs of, quite probably, most countries on planet Earth, many of us became understandably suspicious of any actions around the world that seemed to meet with an endorsement by the USA, regardless of the internal dynamics of such actions. Could this be, we wondered, another example of US imperialist interference? Is this just another US-supported puppet movement attempting to realign a country?

Rather than undertake a critical examination of each situation, the impulse was to react or go silent. To the two cases examples earlier—Mugabe’s Zimbabwe and Ortega’s Nicaragua—I would add the allegedly “anti-imperialist” theocracy in Iran.

And then came the Russian-Ukrainian crisis beginning in 2014, ultimately leading to the Russian invasion in February 2022.

The Ukraine Solidarity Network was founded with an emphasis on opposition to great-power domination; the right of nations to self-determination (and the respect for national sovereignty); and the right to self-defense in the face of aggression. For some on the left, including, and with all due respect, Noam Chomsky, the mere fact that the US government, and its NATO allies, support the Ukrainian government has obscured the real set of issues contained in this crisis. As a result, we who formed the Ukraine Solidarity Network concluded that the silence needed to be broken…from and by the Left.

The confusion that exists in many left and progressive circles in connection with Ukraine revolves around NATO and its expansion after the collapse of the USSR. As Chomsky and I both agreed, prior to our exchange on The Real News Network in April 2022, NATO should have been dissolved and it should never have expanded. The expansion was driven not solely by the ambitions of US administrations but also fear on the part of many of the post-Soviet governments in eastern Europe regarding the intentions of post-Soviet Russia. That said, a comprehensive security agreement should have been negotiated. It was not.

Yet the NATO expansion largely ended in 2004 and, in the case of Ukraine, there was little public support for joining NATO prior to 2014 and the commencement of Russian support for secessionist movements in the eastern part of the country, along with the Russian seizure of Crimea. Nevertheless, the response by Western countries was limited—beside expressions of outrage—and there was significant opposition within NATO to admitting Ukraine, which in practical terms meant that Ukraine would not be entering the alliance.

Russian President Putin gave away any ground for progressive/left support when—on the very night of the invasion—he framed the impending assault in terms that would have made Tsar Nicholas II proud. By describing Ukraine as a national fiction and engaging in a polemic with Lenin and Stalin on the “national question,” Putin made it clear that what was underway was not a defensive move against NATO but a reassertion of a Russian sphere of influence.

The last time that I checked, those of us on the left side of the aisle were supposed to stand in opposition to spheres of influence. We do so by standing in favor of the right of nations to self-determination.

Our network stands resolutely in favor of peace—but not the peace of the graveyard. A cessation of hostilities by the aggressor—Russia—and their withdrawal of troops would be a start. Comprehensive negotiations would ultimately be necessary in order to guarantee peace and security for Russia and Ukraine. To this we would politely add that it is not up to those of us in the United States to instruct the Ukrainians on what and how much territory they should cede to Russia in order to guarantee an alleged peace.

Many sincere people believe that supporting the right of Ukrainians to armed resistance somehow encourages war, with the possibility of escalations. However, no similar objection was ever raised in 1935 when Ethiopia was invaded by Fascist Italy and begged for support. Nor were such concerns raised—at least, not by the left—in 1936 when a pro-fascist coup attempt took place in Spain, supported by the direct military intervention of Italy and Germany, leading the Spanish government to request international assistance, including from imperialist powers (some of whom did use claims of devotion to peace to deprive the Spanish republic of the means to defend itself). Nothing like that was raised during the Vietnam War when the Vietnamese fought against US aggression, despite the ever-present threat of nuclear attacks by the USA.

Bill Fletcher, Jr. is a past president of TransAfrica Forum, a longtime trade unionist, and a cofounder of the Ukrainian Solidarity Network. He is a member of the editorial board of The Nation.