Millions take part in strikes, stoppages and marches on day of co-ordinated action as eurozone teeters on return to recession 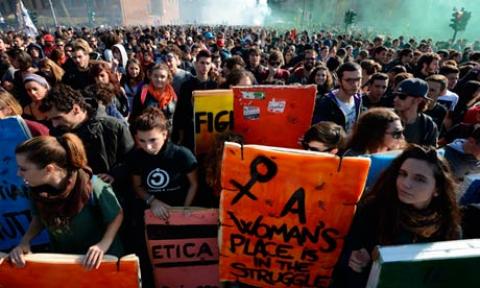 Italian protesters march in Rome, while thousands of others also took to the streets across Italy to demonstrate against what they say are cuts orchestrated by Germany. ,Photograph: AFP

Hundreds of thousands of Europeans mounted one of the biggest coordinated anti-austerity protests across the continent on Wednesday, marching against German-orchestrated cuts as the eurozone is poised to move back into recession.

Millions took part in Europe-wide strikes, and in city after city along the continent's debt-encrusted Mediterranean rim, thousands marched and scores were arrested after clashes with police.
There were banners declaring "Austerity kills," Occupy masks, flares, improvised loudspeakers and cancelled flights. But there was also a violent, even desperate edge to the demonstrations, particularly in Madrid and several Italian cities. In the Spanish capital, police fired rubber bullets to subdue the crowd; in Pisa, protesters occupied the Leaning Tower, and in Sicily cars were burned.
"There is a social emergency in the south," said Bernadette Segol, the secretary general of the European Trade Union Confederation. "All recognise that the policies carried out now are unfair and not working."
Swingeing austerity in Greece, Italy, Spain and Portugal has sent unemployment soaring - there are now more than 25 million unemployed Europeans, and about one in every eight people in the eurozone is jobless. Figures to be released on Thursday are expected to show that the eurozone has tipped back into recession.
[Anti-austerity protests in Spain and Portugal - in pictures]
Across northern Europe, protesters turned out more in sympathy than in anger. Several thousand gathered at the Brandenburg Gate in Berlin, and there were stoppages and marches in Belgium and France. But it was southern Europe that bore the brunt.
In Italy, students were in the front line in noisy and often violent anti-austerity marches. In Naples and Brescia, protesters occupied railway tracks; in Genoa, the entrance to the ferry port was blocked. In Turin, a police officer was hit with a baseball bat. Trento, Trieste and Palermo also saw protests. In Padua, two police officers were injured in clashes, and 10,000 people marched in Bologna. There were clashes in Milan, and in Venice protesters draped a bank with banners reading: "You are making money out of our debts". In Rome, where there were four separate marches, traffic was brought to a standstill following clashes on the banks of the Tiber after far-right students tried to get round a police line to reach parliament.
In Spain, police helicopters began flying low over central Madrid as soon as the strike started at midnight and stayed there all day. Riot police out in force in the emblematic Puerta del Sol square, where protesters have gathered for centuries, but particularly since the "indignant" movement sprang up 18 months ago.
Many shops and banks in central Madrid closed for the day, or put up security shutters, and police formed a cordon around the offices of the governing People's party, and several department stores. Public transport and state radio services were patchy as workers heeded the strike call. Long queues formed at bus stops and the radio relied on recorded fillers. The afternoon news on Spain's RTVE channel was interrupted by protesters waving banners in front of outside broadcast cameras.
Traffic jams formed in the evening as noisy demonstrators filled Madrid's main artery, the Castellana, toting banners protesting at budget cuts and backing public services. Many of them chanted "Public health has to be defended, not sold off".
In Athens, the turnout was thinner than usual, perhaps because of last week's two-day strike. Protesters described a country running out of reserves. Many have survived three years of recession and austerity by relying on family support or handouts. "But when that dries up, and it will with these latest measures, there will be no reason not to descend en masse on to the streets," said Kostas Kapetanakis, a young sociologist holding a banner in Syntagma Square demanding free education, health and welfare system. "There will be a revolt because we will have absolutely nothing to lose."
Nikos Bokaris, the president of the national foresters' association standing with other civil servants outside parliament, feared Greece was being pushed towards a huge explosion.
"Civil servants feel they have been very unfairly singled out," he said. "I am very afraid that the country is heading for a massive social upheaval with huge consequences for public safety and order. All it will take is a spark."
Subscribe to Portside