The AFL-CIO expects 22 states to consider restrictions to the bargaining process, such as preventing particular types of government employees from joining bargaining units, this year. 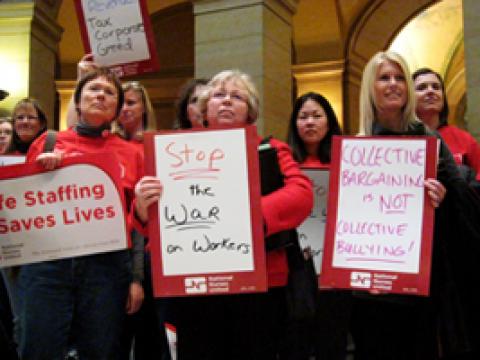 Solidarity: nurses protest at the Minnesota State Capitol against the Wisconsin proposal to eliminate most collective bargaining rights, MPR photo/Lorna Benson
The past few years have been filled with high-profile labor battles that drew protestors by the thousands to statehouses around the country. Michigan and Indiana passed right-to-work legislation in 2012, which makes it illegal to require workers to pay union fees as a condition of employment, a year after Wisconsin Governor Scott Walker pushed through a law eliminating collective bargaining rights for most public employees.
This year’s legislative battles over collective bargaining rights are likely to be more subtle, but the legislation put forward would still have a significant impact on employer-labor relationships, if passed. The AFL-CIO, a federation of labor unions, expects 20 states to consider some type of restriction on payroll deductions of union dues by public employers.
Some of the measures in question would restrict the ways that payroll deductions could be used by unions -- barring political activities -- while others would prohibit public employers from participating in the process of dues-collection at all. The AFL-CIO also expects 22 states to consider restrictions to the bargaining process, such as preventing particular types of government employees from joining bargaining units.
New Hampshire
The New Hampshire legislature is considering a bill that would expand the management authority of public employers by removing key issues from the bargaining table. It expands the list of topics off-limits for bargaining to include “the right to determine standards for evaluation, compensation, selection, layoff and retention, assignment and transfer, and other traditionally accepted managerial rights.” Labor leaders say the bill is a back-door attempt to put an end to collective bargaining for public employees. The bill is sponsored by Senate President Peter Bragdon, a Republican, but faces likely opposition in the Democrat-controlled House and from Democratic Governor Maggie Hassan.
North Carolina
Only 2.9 percent of North Carolina workers belong to unions, ranking the state last in union membership, according to Bureau of Labor Statistics figures released last week. The state has long had right-to-work legislation in place making it illegal for employers to require union membership as a condition of employment. Even so, right-to-work is likely to be a hot issue there this year. Republicans control both chambers of the legislature and the governorship for the first time in over a century and are looking to take the opportunity to ensure that the state retains its right-to-work status in the future. Legislative leaders have proposed enshrining language already in state law in the state constitution. Proponents of this approach say it will give the state a leg up over states such as Michigan and Indiana that have passed right-to-work legislation in recent years.
Iowa
The American Federation of State County and Municipal Employees Council 61, which represents about 20,000 state workers, has seen its membership reach an all-time high despite the state’s status as a long-time right-to-work state. AFSCME President Danny Homan credits this growth to a feeling among state workers that they are not being treated with proper dignity and respect by the administration of Republican Governor Terry Branstad. The union and the administration have been locked in contentious negotiations at the bargaining table and will go to arbitration in February if they are not able to reach an agreement. While the details of the negotiations are confidential, union leaders have expressed anger about proposed health care cost increases and changes to the structure of the labor-management relationship. Among the changes included in the administration’s original proposal are modifications to work rules governing grievances, bumping and transfer rights, and an end to voluntary payroll deduction of union dues.
Indiana
Indiana became a right-to-work state in February 2012, and state workers do not have collective bargaining rights. Still, union leaders there are gearing up for a series of fights over issues that they say would further cripple their ability to function. Indiana Republicans now have a supermajority in the legislature and are expected to take up legislation that would prohibit public employers from taking dues from any employee’s paycheck, even if the employee approves the deduction.