The Cheated Generation: Lack of Good Jobs for Young Adults is Creating a Moral Crisis

New employment figures reveal young adults in the U.S. have nearly double (13.7 percent) the unemployment rate of the general population. We must face up to this moral crisis and demand the policies that will employ Millennials. 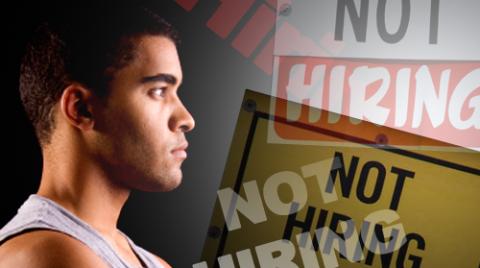 Teens, Advocates Say Washington Must Address Youth Unemployment, Progress Illinois
New employment figures reveal young adults in the U.S. have nearly double (13.7 percent) the unemployment rate of the general population. Combine that with the still chronic underemployment of this generation, and we have a moral as well as economic crisis in the making.
These young adults call themselves the "Lost Generation"; they write about being "crippled by college debt and graduated into a struggling economy...[with] little chance to find gainful employment in their chosen fields." They "take temporary jobs they are overqualified for."
They are not lost; they have been cheated out of at least a decade of their lives.
Let's be very clear. This is a moral crisis as well as an economic crisis because the promise of this "Millennial generation," once labeled "confident, connected, open to change," has literally been taken from them. "You shall not steal" (Exodus 20:15) is one of the most well known biblical precepts. But these Millennials have had their future stolen. They are literally not making a future, putting off marriage and having children, for example, because they cannot afford it; the future of their children, too, is being taken.
Make no mistake where the blame lies for this rolling catastrophe. The promise of this generation has been taken from them by risky banking practices. There is nearly universal consensus that the "Great Recession" was triggered by the high rate of defaults on subprime mortgages when the housing bubble burst. Ironically enough, the overreaching by banks in risky lending is hitting the young adult generation, who didn't even own homes at the time, the hardest through the overall economic downturn and the continuing failure of the economy to produce good jobs.
The "employed superhero" of the #Occupy movement reveals this.
It gets worse. There is, in fact, a three and even four-generation crisis now, from Millennials, to their choice not to have children, and now even to their parents and grandparents.
Unemployed or underemployed Millennials are moving back with their parents, often unable to get a job that pays enough for them to live independently and also pay their student debt.
These parents are called the "Sandwich generation" and are often stressed economically when their young adult children need financial help, while they are also helping their parents. They are "sandwiched" between their parents and their children, as a new Pew Study reveals.
The increased need of the young adults is the new factor that is increasing the stress on the parents. As the Pew study indicates, "roughly half (48 percent) of adults ages 40 to 59 have provided some financial support to at least one grown child in the past year, with 27 percent providing the primary support," and that has increased since 2005, most likely due to the "Great Recession." These "sandwich" Baby Boomers are my generation, and I scarcely have a friend my age with young adult children who is not experiencing this pressure.
Not every young adult has parents who can help, however, and more and more young adults are now homeless, even if they are working.
Add to that the fact that more and more college students are also homeless and hungry as these poignant images attest. I know college chaplains who tell me they are dealing with this crisis on their campuses. Students are going hungry and they are "couch surfing" because they can't afford housing.
I want the best possible future for my children and now my grandchildren. This isn't it. And without intense attention to the multiple factors that are robbing future generations of their promise, it will only get worse.
We must face up to this rolling moral and economic crisis and demand the policies that will help produce good jobs for a whole generation.
A generation has been cheated of their future. We must help them get it back.
[Susan Brooks Thistlethwaite, Professor, Chicago Theological Seminary is the former president of Chicago Theological Seminary (1998-2008), She is a senior fellow at the Center for American Progress.]
Subscribe to Portside