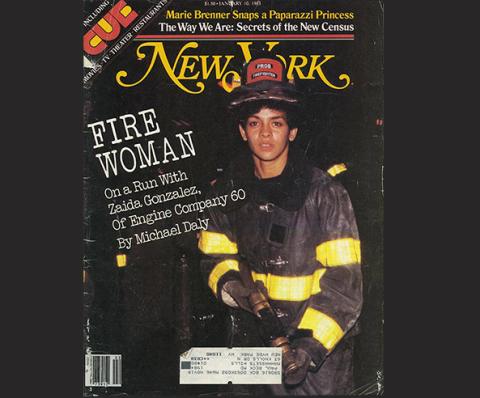 Cover story in New York Magazine, January 10, 1983: “Fire Woman—On a Run With Zaida Gonzalez of Engine Company 60.” The story was relatively positive, chronicling her work as a firefighter in Engine 60., New York Magazine
Prior to 1977 there was a quota for women firefighters in the New York City Fire Department (FDNY)—that quota was zero. It did not matter if you had won an Olympic gold medal, had been named the “strongest woman in the world” or held the world-record in the marathon—if you had been born female, you could not even apply to take a test to become a New York City firefighter.

All that changed when Title VII of the 1964 Civil Rights Act was finally applied to bar sex discrimination in hiring by city and state governments in 1972. When the FDNY gave the next firefighters entry exam for firefighters—in 1977—women were allowed to take the tests. Many did well on the written exam, but the physical exam was a different story. Instead of using the physical abilities test taken by previous male applicants, the department developed a “substantially different” test. Alfred Heil, Assistant Director of Personnel in charge of the test: “In my 20 years’ experience, this was the most arduous test we’ve ever given… for anything.”

When not one of the 90 women applicants passed the physical portion of the test, one of them, Brenda Berkman, filed a class-action sex discrimination complaint. Five years of expert testimony and inflammatory press coverage later, Federal District Judge Charles P. Sifton ruled that the 1977 test did not measure the abilities truly needed for the job of firefighting and the FDNY must develop a new test. Forty two women passed the new test, and in September 1982 entered the NYC Fire Academy, becoming the first women firefighters in the history of the FDNY.

They would need their strength for decades to come, for meeting the challenges of the job itself was only a start. Women firefighters more than women in many other blue collar jobs, remained a flashpoint for larger social conflicts over the role of women for decades to come.