The battle over teachers unions has marched its way across the country. Ohio. Michigan. Wisconsin. Idaho. And now it’s in Kansas, greeted by Republican Gov. Sam Brownback and his conservative allies in the Legislature. 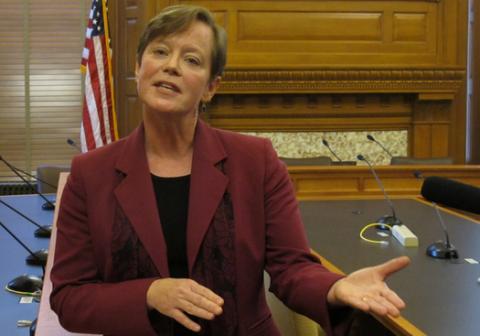 A former federal education official has likened them to terrorists.

Less vilified in Kansas than some other parts of the country, those teachers unions still find their clout under attack in the Legislature.

The battle over teachers unions has marched its way across the country. Ohio. Michigan. Wisconsin. Idaho. And now it’s in Kansas, greeted by Republican Gov. Sam Brownback and his conservative allies in the Legislature.

Lawmakers are moving to undercut the tenuous power of teachers unions by barring them from using voluntary paycheck deductions for politics.

And they’re going after teachers’ ability to bargain collectively on key issues — hoping to give cash-strapped school districts new flexibility and leverage in contract talks.

The organized labor of education says it’s under siege.

“We are seeing a lot of things that appear to be a direct attack on teachers,” said Kansas National Education Association President Karen Godfrey.

Following the recommendations of a school efficiency task force convened by Brownback, the Legislature is looking at how to curtail the bargaining power of teachers unions by limiting what can be negotiated.

The most prominent bill would continue to promise negotiations on specific issues, including salaries, work load outside the classroom within an eight-hour work day and sick leave.

More critically, the legislation would give school administrators the option to refuse negotiations on health benefits, dress codes, grievance procedures and contract terminations.

Further, teacher evaluations and the length and number of teaching periods would be off limits — school districts would have to settle those rules outside of contract talks.

Union leaders say they doubt school boards would agree to bargain anything that’s not mandatory. The legislation reduces the number of items that must be negotiated from 30 to five, union leaders say.

While teachers can’t strike in Kansas and school boards can ultimately impose contracts, school administrators say it is a time-consuming, costly and polarizing process to make even minor tweaks to a contract.

The current system, they say, limits their ability to make swift decisions about insurance benefits, the number of teaching periods during a day or disciplinary procedures.

“It’s all about doing everything we can to maximize the educational outcome for our children,” said Rep. Marvin Kleeb, an Overland Park Republican and chairman of the House commerce committee.

Officials from the state superintendents’ association said they believed that districts would continue to negotiate as they do now.

Still, the prospect of new bargaining rules is unsettling for Ellen Stevens, a fourth-grade teacher at Broken Arrow Elementary School in Shawnee.

“The Shawnee Mission School District is an excellent school district. We’re doing fine with our union and the way things are structured,” Stevens said. “Why they want to come in and take that all away, doesn’t make any sense to me.”

The debate is igniting in Kansas.

Last weekend, more than 300 people — many believed to be teachers — turned out at a legislative forum in Wichita that drew opposition to overhauling the collective bargaining law.

And on Wednesday, dozens packed into a Capitol hearing room to listen to testimony on the collective-bargaining bill.

The debate generally breaks down into two camps.

One side argues that teacher unions drive up the cost of education, protect bad teachers and resist reform measures such as school choice.

It contends that union contracts hamstring school administrators with complex rules that limit their ability to meet the evolving needs of students. They talk about giving districts more “flexibility,” which in some ways means potentially reducing costs.

“Management needs to be able to make the decisions that are in the best interest of kids,” said Dave Trabert, president of the conservative leaning Kansas Policy Institute.

“Because of the collective bargaining limitations, they sometimes can’t make decisions on staffing, the calendar or other things that the school board, the superintendents and the principals believe are in the best interest of kids.”

The other side argues that collective bargaining fosters an environment that attracts the best teachers.

“It provides teachers with a voice,” said Calin Kendall, president of the Olathe National Education Association. “If you want students to learn, you have to put good teachers in front of them.”

Local school districts say they take a collaborative approach to negotiating with their teachers, frequently exchanging ideas throughout the year to arrive at a contract.

That was one reason why the Olathe school board president testified against another bill that would limit collective bargaining rights.

She argued that contract talks in Olathe create a team atmosphere for sharing ideas to improve schools.

“We’ve given our teachers more responsibility and higher expectations, with almost nothing in the way of increased compensation, yet somehow it works,” Amy Martin said in written testimony in January.

Blue Valley Superintendent Tom Trigg said he was not sure what he would change about the district’s current contract if it were not negotiated. But in tight budget times, it might help if the district didn’t have to negotiate how many class periods someone teaches.

“If you have drastic budget cuts and you have to look at things that would have a negative impact on the educational model, then that’s one you would want to be able to talk about,” Trigg said. He’s not, he added, proposing to make class assignments non-negotiable.

Consider, Johnson said, the time promised to teachers to prepare their coursework. Increasing planning time can force the district to lengthen the school day or add staff.

And adding more staff to cover for extra planning time, he said, is an “extremely expensive proposition.”

Union leaders point out that their bargaining power is already weakened by the fact they are prohibited from striking and that school districts can impose a contract if the two sides can’t reach an agreement.

Last fall, the Thomas B. Fordham Institute looked at the strength of teachers unions in all 50 states. The Washington D.C. -based education think tank ranked Kansas unions a relatively weak 32nd.

“While close to the middle of the pack nationwide, they are among the least powerful unions in states in which bargaining is mandatory,” the study said.

Various studies have looked at the relationship between unionized school districts and student achievement. Experts say it’s hard to show a connection between the two because so many factors are at work, including how successful unions are at bargaining for salaries, benefits and rules that impact the classroom.

“There is no clear answer,” said Randall Eberts, who has studied teacher unions for more than 30 years and is now president of the W.E. Upjohn Institute for Employment Research in Kalamazoo, Mich.

Stanford economist Caroline Hoxby also has studied how teacher unions affect education. While there is evidence that teacher unions have a “pretty big positive” impact on how much is spent on public schools, there is either no impact or a negative impact on student performance, she said.

What is clearer is that teacher unions sit in a politically tenuous position.

In Kansas, there might be some political payback following last year’s elections when the KNEA took sides against candidates backed by the Brownback political apparatus, said Chapman Rackaway, a political science professor at Fort Hays State University.

“If Gov. Brownback really wants to make a sustained Republican majority at the state government level and he can cut the legs out from under the unions,” Rackaway said, “then moderates and Democrats have one of their core remaining pieces of infrastructure weakened.”