Fletcher told the Guardian he believes the national labor movement is witnessing a “final offensive” from big business and right-wing interests, and “an attempt to destroy unions altogether.” He also criticized a reluctance among national labor leaders to openly recognize the gravity of the situation. 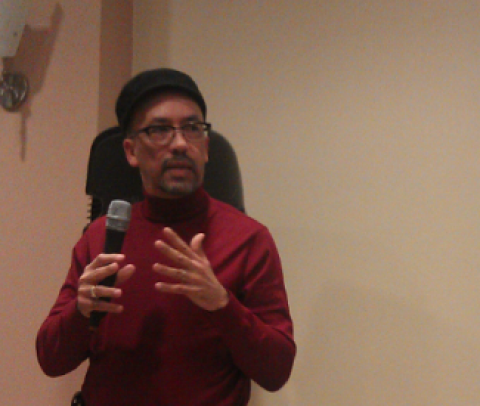 Bill Fletcher Jr. spoke at "Labor at the Crossroads" on March 7., Guardian photo by Rebecca Bowe

Even as renowned labor activist Bill Fletcher Jr. geared up for a talk last Thursday to describe the dire situation he believes the labor movement is facing, local organizers had victories to celebrate.

Fletcher joined organizers from the Filipino Community Center, OUR Walmart, PODER and POWER for a March 7 forum hosted by San Francisco Jobs With Justice, called “Labor at the Crossroads.”

Prior to the discussion, Fletcher told the Guardian he believes the national labor movement is witnessing a “final offensive” from big business and right-wing interests, and “an attempt to destroy unions altogether.” He also criticized a reluctance among national labor leaders to openly recognize the gravity of the situation. Fletcher’s latest book, published last August, is titled They’re Bankrupting Us, and 20 Other Myths About Unions.

Fletcher said he believes labor should place less emphasis on “being invited to this or that social occasion,” and more on reaching out to community-based organizations to foster movement building. He said he thought there was a need for “innovation” by organized labor, such as forging alliances with the unemployed, or reaching out to under-employed workers earning low wages in retail positions. “The labor movement grew by being audacious … by making the comfortable uncomfortable,” he said.

Despite Fletcher’s bleak portrait and the generally discouraging trends of the day, such as the impacts of the sequester, an international move toward austerity and stubbornly high unemployment in the United States, representatives from San Francisco Jobs with Justice nevertheless were able to point to some recent worker victories.

Many San Franciscans who gathered for “Labor at the Crossroads” were encouraged by successful negotiations that resulted in what they viewed as a much-improved deal for the San Francisco CPMC hospital project, which included stronger local hiring requirements and other items labor and community organizers had fought for.

At the state level, the California Domestic Workers’ Coalition kicked off its mobilization last week in Los Angeles urging passage of the Domestic Workers’ Bill of Rights, authored by Assembly Member Tom Ammiano. The legislation would extend basic labor protections to housekeepers, childcare workers and caregivers, who collectively represent a primarily immigrant workforce. At the national level, momentum is starting to build around the Fair Minimum Wage Act, with supporters calling on lawmakers to raise the minimum wage to $10.10 an hour.

“The union movement should be helping unemployed workers get organized, fight back and fight for jobs,” Fletcher said. “There is no significant organization of the unemployed – no significant force that has taken up this issue and said, we need to build a mass movement around jobs.”

He urged local organizers to identify priorities. “We have to go forward with, what is the vision?” he said. “What do the people of Oakland and San Francisco need?”