We Want Our City Back: What's at Stake in the Floyd v. City of New York Trial

On March 18, a historic case against the NYPD's stop-and-frisk program will commenced in a Manhattan federal courtroom. Floyd v. City of New York is part of a citywide movement to end this shameful, massive violation of rights and to help bring about the day when all New Yorkers will be treated by their government as equally entitled to walk the streets of their city without harassment. 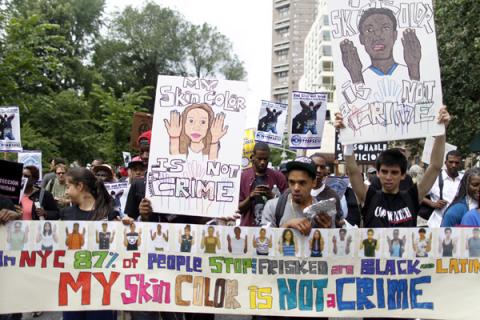 Father's Day 2012 mass demonstrations against Stop and Frisk, Pearl Gabel/City Limits
New York is a cosmopolitan, sophisticated city in the leading democracy in the world, yet its residents all too often feel like they are living in an occupied country - only the occupation here is by their very own police force. Every year, the New York City Police Department illegally stops hundreds of thousands of people as part of its stop-and-frisk program. Eighty-seven percent of those stopped are Black or Latino, even though those groups make up only 53 percent of the city's population. Police daily violate New Yorkers' constitutional rights against unreasonable searches and seizures. "There's this constant fear that, like, police are going to intimidate and harass you," one man told the Center for Constitutional Rights last year in its "Stop and Frisk: The Human Impact" report.
The NYPD "give[s] you a ticket for trespassing `cause you're sitting on the bench that's in front of your building," another told us. "I can't sit on the bench in front of my building? Why's the bench there?"
This is no way to live. And on March 18, it will literally be put on trial. On that day, a historic case against the NYPD's stop-and-frisk program will commence in a Manhattan federal courtroom. Floyd v. City of New York is part of a citywide movement to end this shameful, massive violation of rights and to help bring about the day when all New Yorkers will be treated by their government as equally entitled to walk the streets of their city without harassment.
This case is the culmination of more than a decade of work by the Center for Constitutional Rights and the solid determination of a citywide movement that has made stop-and-frisk a central issue in New York City politics. Out of the horrific 1999 shooting of Amadou Diallo - an unarmed Black man who was mowed down in a hail of 41 NYPD bullets while standing in the doorway of his own apartment building - grew the rebirth of a decades-long movement against abusive and discriminatory policing. Part of that response was CCR's landmark case Daniels v. City of New York, filed in 1999 and settled in 2003. Daniels led to the disbanding of the infamous NYPD Street Crime Unit. It also required the city to provide quarterly stop-and-frisk data to CCR, which led to the development of the Floyd case when it became clear the city was not abiding by the settlement and that the number of unconstitutional stops had grown exponentially.
Floyd brings full circle the movement that surged in 1999, when thousands of New Yorkers took to the streets chanting, "It's a wallet, not a gun," a reference to Diallo's fatal attempt to show police his ID and an encapsulation of all that is wrong about the racially biased practices of the NYPD.No court case is more critical to the future of our city than Floyd. At stake are the constitutional rights of hundreds of thousands of New Yorkers who have been illegally stopped by the NYPD and the rights of countless New Yorkers who may be stopped in the future. At its core, this case is about two competing visions of what kind of city we want to live in.
One vision is of a city where everyday, thousands of people are pre-emptively assumed to be suspects, stopped for things like "furtive movements" or "wearing clothes commonly used in a crime" -  both actual categories on the form police fill out for every stop, whereby "furtive movements" is far and away the most commonly cited reason. It's a city in which police-community relations will continue to deteriorate as police treat their fellow New Yorkers not like neighbors but like intruders in their own communities. It's a city in which young people, Black and Brown people, gay and transgender people and others will be fearful every time they step out of their homes, will make sure they are carrying ID even if they're only going to the corner to buy a quart of milk and will flinch every time a police cruiser goes by. A city where parents teach their children how to safely survive a stop-and-frisk on their way to school.
The other vision is of a city where the problems and abuses of stop-and-frisk are acknowledged and collaboratively addressed. It's a city where New Yorkers' constitutional rights are not violated every day. A New York where the NYPD partners with communities instead of harassing them and improves public safety through mutually respectful community ties. A New York where all people can walk down the street without fear of being illegally stopped.
This is the New York that Floyd v. City of New York can help bring about. Change is not only necessary - it's also possible. The best way to reform the NYPD and end illegal stops and frisks is through a comprehensive, collaborative process that brings all the stakeholders to the table to hammer out the specific remedies needed. That is what we hope to do through Floyd.
[Annette Dickerson is director of education and outreach at the Center for Constitutional Rights). To read more about the case, visit.]

Daily updates on the current Floyd v. City of New York trial challenging the constitutionality of the NYPD's stop-and-frisk program. The case is being brought by the Center for Constitutional Rights, and CCR is doing a daily update of what happened at the trial. It is here . We publish around 7pm, give or take a few minutes.