Extinction That Paved Way For Dinosaurs Definitively Linked To Volcanism

A mass extinction caused by volcanic activity wiped out some of the dinosaurs' competitors, allowing them to assume ascendancy. Of course, another mass extinction, caused by a meteor impact caused their demise. Earth is not as hospitable to life as we might like to think. 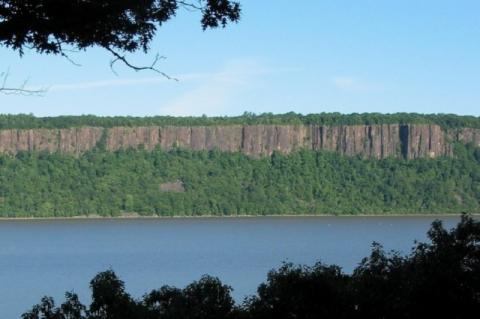 The formation of these innocent looking rocks killed off most of the species alive at the time, but worked out well for the dinosaurs., NY DEC

Although we tend to think of the Earth as an amazingly hospitable planet, at several times in the past it seems to have done its best to kill us all—or at least all of our ancestors. Several of the Earth's mass extinctions occurred around the time of elevated volcanic activity, but the timing has been notoriously difficult to work out; the fossil beds that track the extinction rarely preserve the evidence of volcanic activity and vice-versa.

A study that will appear in today's issue of Science provides a new window into the end-Triassic mass extinction, the event that ushered in the start of the era of the dinosaurs. The study provides a precise timing of events of the extinction through a combination of new dating work and a link to the Earth's orbital cycles preserved in rocks near Newark, New Jersey (because when you think end-Triassic, you think New Jersey, right?). The timing of events shows that the extinction occurred at the very onset of the volcanic activity that signaled the breakup of the supercontinent Pangea, but that life began to recover even as the later eruptions were taking place.

Volcanic activity takes place all the time, and while it can be devastating for the local environment (and you can use a very large definition of "local" for supervolcanoes), this isn't enough to set off a global extinction. For that, you need what are termed "flood basalt eruptions." These events are just what the name implies: molten rock comes flooding out of a rift and covers thousands of square kilometers in rock, often at depths of hundreds of meters. Then, before the Earth recovers, you do it all over again. The largest of these eruptions, which formed the Siberian Traps, has had the total volume of rock that erupted estimated at above a million cubic kilometers.

Events like these tend to kill stuff, and not just locally, where everything ends up buried under tons of rock. The eruptions send a lot of sulfur compounds into the atmosphere, which form a haze that reflects sunlight back to space. The result can create a sharp, temporary cooling in climate (think the Year Without a Summer on steroids). Once that clears out, the massive amounts of carbon dioxide that were also released kick in, swinging the temperatures up to new highs. The oceans don't get off lightly, either, as the same carbon dioxide causes a rapid ocean acidification, which makes it extremely difficult for any shelled creatures to survive.

Given that combination, it's no real surprise that the Siberian Traps eruptions set off the biggest mass extinction we know about, the end-Permian, which is commonly known as the Great Dying. Other large scale eruptions have also been associated with mass extinctions, including the one that killed the dinosaurs—that one produced India's Deccan Traps.

As noted above, getting the timing of everything down well enough to assign definitive blame is not easy; the role of the Deccan Traps eruptions in killing off the dinosaurs was only settled by finding something else to blame. But we now have a very good picture that ties eruptions nicely to the end-Triassic extinction, which wiped out some of the dinosaurs' competitors, allowing them to assume ascendancy.

Getting the timing right

The eruption that may have triggered the end-Triassic extinction was caused by the breakup of the supercontinent Pangea, and took place along the rift that would eventually form the Atlantic ocean. It left behind the Central Atlantic Magmatic Province (CAMP), which is now spread across four continents, from France and Spain through to West Africa on one side of the Atlantic, and along the US' East Coast and down into Brazil on the other. The CAMP was built from a series of eruptions that left behind giant layers of basaltic rock; residents of New York City can see one by looking across the Hudson at the Palisades of New Jersey.

Certainly, the eruptions were big enough to bring about global devastation. But did they? It has been hard to tell. Basalts don't typically include the sorts of minerals that allow us to do highly accurate dating through radioactive decay. And the basalts themselves contain no fossils, making it difficult to figure out how the timing of various events fit together.

The key to piecing things together came from an area in New Jersey called the Newark basin. Deposits in the basin contain a number of layers that turned out to be incredibly informative. To begin with, these included several distinctive layers of basalts caused by individual eruptions that contributed to the CAMP. These were interspersed with sedimentary deposits, some of which contained signs of life that allowed the process of extinction and recovery to be tracked. The sediments, however, also contained periodic changes that appear to line up with the Earth's orbital cycles (the same ones that drive the modern glacial cycles). Scientists hypothesized that these came about as local currents changed, altering the deposit of sediments, but there was no way to confirm that.

The new work involved drilling in to eight sites around the CAMP, a number of which yielded zircons associated with individual eruptions. These crystals, which are rarely associated with magmas, can be used for highly accurate uranium-lead dating. That gave them the timing of the individual eruptions, which could then be traced back to the Newark basin deposits. These confirmed that the dates predicted by orbital cycles lined up with those from the uranium-lead dates. With all this information in hand, it was possible to put together a chronology of both the extinction and the eruptions. (The authors refer to having a combination of geochronology and astrochronology.)

The data now suggests that it didn't take repeated heating-cooling cycles to start the extinction; the very first flood basalt eruption apparent in the CAMP seems to have started eliminating species. Three other major eruptions occurred over a 600,000 year period, but the first did the most damage. In fact, there are some indications that species were starting to recover even as the final eruptions were taking place.

Oddly, the CAMP may eventually play a role in reversing problems similar to the ones its formation caused. The rapid increase in CO2 we're currently creating is raising fears of a rapid ocean acidification that could lead to widespread extinctions as well. The rocks of the CAMP will react chemically with carbon dioxide and are being considered as a potential site of carbon sequestration.