Netflix’s new House of Cards series offers an inside look at Beltway power games and is far better than most of this genre---which is why its retrograde and even racist union-bashing is so unfortunate. 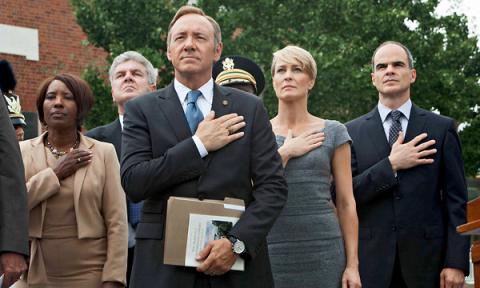 Netflix’s new House of Cards series offers an inside look at Beltway power games and is far better than most of this genre---which is why its retrograde and even racist union-bashing is so unfortunate. For example, episode 5 sympathetically portrays politicians who lie to unions, and claims eliminating federal funding for school districts engaged in collective bargaining is necessary for education reform. Teachers’ unions are shown as completely out of touch with members, and run not by their female and African-American elected political leadership but rather by white male political consultants. And in an episode that could have been produced by either Michelle Rhee or the National Right to Work Committee, House of Cards depicts elite interests as knowing better what workers want than their own unions. Beneath its plot turns and star power, the series whose theme is “Bad, for a greater good” is a clever advertisement for the interests of the 1%.

After such false anti-union films as Won’t Back Down and Waiting for Superman, House of Cards shows that union-bashing in supposedly “liberal” Hollywood continues. And it’s unfortunate, because the Kevin Spacey driven show has a lot of great features that drive viewer interest.

Here are the lessons about unions that episode 5 of House of Cards offers:

1. Politicians should lie to workers for “the greater good.”

Spacey’s character, Franklin Underwood, is a powerful Democratic Congressman from South Carolina charged with getting a newly elected President’s education bill through Congress. After days of round the clock negotiations, Underwood reaches a deal with teachers unions on the key terms.

But Underwood had no intention of keeping his commitments. And when the unions learn that he has inserted language that would eliminate federal education funding for districts with collective bargaining---i.e. districts with teachers unions--- they understandably go ballistic.

Yet Underwood’s deceitful conduct toward the teachers unions is shown favorably; he, unlike unions, knows how to get things done Underwood treats the union like ignorant children for not understanding the shifting flow of the legislative process, and refuses to keep his original commitments or to amend the now viciously anti-union bill.

When the unions decide to retaliate by holding a protest against a fundraising event for a nonprofit headed by Underwood’s wife, we get the episode’s second lesson:

2. Union Leaders Are Out of Touch With Members

Unlike the real world, as in Madison in 2011 when rank and file union members mobilized to protect collective bargaining rights, House of Cards portrays teachers as uninterested in the issue. When the teacher’s consultant demands that bodies show up to protest Underwood’s fundraiser, he is told that it’s not clear that the teachers really care enough to attend. He then demands that bodies be brought to the protest whether they are teachers or not—and says that they could ask Teamster members to attend if teachers are not interested (I assume Teamsters were named due to the producer’s association with their corrupt leadership of the pre-1990’s)

Predictably, the media coverage of the protests questions whether any of those present even are teachers—because we are supposed to understand that “real” unionized teachers would quietly accept the loss of collective bargaining rights quietly. By exposing the consultant and the unions for promoting a “fake” event, labor’s unethical behavior is highlighted while Underwood’s broken commitments and lies are ignored.

In every interaction involving the unions, elected teacher leaders---shown to be African-American women-- are treated like support staff for their paid male consultant. In the Michelle Rhee/House of Cards world, no powerful African-American or female labor leaders like the Chicago Teachers Union’s Karen Lewis exist---a troubling departure from the truth from a show that allegedly tries to even get the smallest details right.

As fanatically anti-union as all of the above is, the crowning indictment comes when Underwood and others bring food from the lavish fundraiser to the chanting protesters.

In the fantasy world created by House of Cards, the male consultant had refused to provide any food to the protesters, who are primarily women of color (since we are told they are not teachers and presumably are not Teamsters, how they got to the protest is unclear. One implication is that they were paid).

But unlike the manipulative union consultant, who does not care if his protesters go hungry, Underwood and his anti-union allies understand that workers need food. Although the consultant tries to discourage the protesters from eating what has been offered, they accept the food greedily and graciously----leaving the audience believing that the conservative Underwood knows their needs better than unions.

This portrayal is so false, base, and degrading to the integrity and fighting spirit of union members as to rival the many Southern-produced films negatively depicting African-Americans in the pre-civil rights era. It seems that anything goes in bashing unions.

In the real world, unions provide food for members on picket lines or engaged in evening protests. And I describe in The Activist’s Handbook how low-income residents in San Francisco’s Tenderloin district were confronted with a similar offer of food by their adversaries and enjoyed the meal while never relenting on their demands.

In House of Cards, it is unions rather than corporations or the wealthy who must sacrifice for “the greater good.” Its packaging of Spacey, Robin Wright and other strong actors along with a fast paced plot transforms the series into a national advertisement for the glory and power of the Republican agenda and the 1%---a fact that Spacey’s cynical sensibility may cause many viewers to overlook.
____________________

Randy Shaw is also author of Beyond the Fields: Cesar Chavez, the UFW and the Struggle for Justice in the 21st Century