If the analysis is correct, then it represents several kinds of potential trouble. First, it reinforces the argument for animal-to-human transmission of resistant bacteria. Second, it emphasizes that such bacteria can be picked up and transmitted even by animals that are not routinely receiving antibiotics . . . And third, it raises the question of how much more resistant bacterial traffic is out there that we are not detecting. 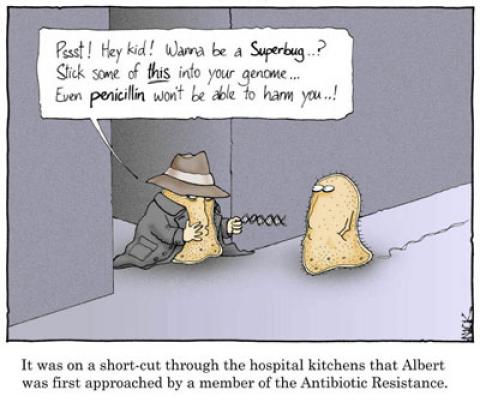 The antibiotic era was barely 20 years old when people started raising concerns about using the new “miracle drugs” in agriculture. Penicillin first entered use in 1943, streptomycin in 1944, tetracycline in 1948 — and by 1965, the United Kingdom’s Agricultural Research Council was hearing testimony that organisms common in food animals, especially Salmonella, were becoming resistant to the antibiotics being used on the animals while they were alive. By 1969, the UK government had compiled an official report outlining the danger, and by 1973, a task force of the US Food and Drug Administration had concurred, and concluded the only safe action was to withdraw approval to use antibiotics in animals. (At which, as we now know, they would never be successful.)

The policy difficulty regarding this long-recognized problem has never been the emergence of resistant bacteria on farms; no one seriously disputes that resistance emerges whenever antibiotics exert selective pressure on bacteria, killing the vulnerable and opening an ecological niche into which the surviving not-vulnerable can expand. The  sticking point has been the difficulty of proving that those resistant bacteria depart from farms, cross to humans, and cause resistant illness in them. Stuart Levy demonstrated it in 1976, on an experimental farm plot he set up just to make the proof. Most of the rest of the research, though — and after decades, there are hundreds of pieces of research — has been observational and retrospective: Looking at the drugs administered to populations of animals (about which we have very little data), measuring the antibiotic-resistant illness that arises in the human population, and making increasingly sophisticated backward matches between the resistance factors that show up in humans and the drugs that are deployed primarily on farms.

Demonstrating the bacterial traffic prospectively and experimentally, as Levy did, is challenging not just logistically but also ethically. It is difficult to imagine a study design that could trace specific animals, their meat, and their eaters in a large group of free-living humans; and unless you have volunteers, as Levy did, the study would push ethical boundaries as well. But having that lack of definition in the middle of the animal-to-human bacterial flow permits uncertainty — which proponents of continued ag antibiotic use exploit.

A new study of Danish farmers and their livestock may have ended that uncertainty. It is still retrospective, but its observations — using whole-genome sequencing — are so fine-grained that their tracing of the bacterial traffic seems to me to be difficult to challenge.

The work, published in EMBO Molecular Medicine, is by Mark Holmes, senior lecturer in preventive veterinary medicine at the University of Cambridge, and collaborators from two other UK institutions and two in Denmark. It traces the connections between two farmers in Denmark, who each suffered a MRSA infection, and animals on their farms, which lie 28 miles apart.

There is very little MRSA, drug-resistant staph, in Denmark, so little that any occurrence is considered a notifiable disease  — meaning that, when a case is diagnosed, public health authorities must be told. One farmer, a 53-year-old woman who kept two horses and two cows, was diagnosed with a MRSA blood infection and also had the organism in her nostrils. The other, a 69-year-old woman who had a flock of 10 sheep, had a wound that had become infected with MRSA. When their cases came to light — more on that later — they were recognized as a new MRSA strain that has been reported in cattle and so Danish researchers went out to check the animals on both farms. One cow, and three sheep, were carrying the new strain.

Holmes, whose former PhD student Laura Garcia-Alvarez first identified the cattle strain, put the samples through a number of analyses. All seven (four animals, two from Farmer A, one from Farmer B) were identical on several different assays (MLS typing, ST130; spa typing, t843; fingerprinting, PFGE and MLVA) and had the same resistance pattern, susceptible to antibiotics that were not beta-lactams (penicillins and cephalosporins). Then he conducted whole-genome sequencing on them, and compared them to see how closely related they were. Across all seven there was a difference of 154 SNPs (single nucleotide polymorphisms — single-letter “copying errors” in the genetic code). Based on their relatedness, the samples made neat clusters that corresponded to the two farms: the first farmer and her cow, and the second farmer and her sheep.

Here is what the researchers consider the critical part. The isolates from the farmer and her cow were functionally identical (5 SNPs), and so were the isolates from the other farmer and two of her three sheep (5 and 3 SNPs). So, first finding, the humans and their animals shared an infection. But it was the third sheep’s isolate that allowed them to conclude the infection had gone from animal to human: It was slightly different from both the woman’s infection (37 SNPs) and the other two sheeps’ (40 and 42 SNPs). That diversity indicates to them that the infection has been circulating in the flock for a while and then passed to the human via Sheep No. 1 or Sheep No. 2; if the traffic had gone the other way, from farmer to sheep, the relationship among the sheep’s isolates should have been tighter.

Now, the caveats, which Holmes kindly pointed out to me in a phone call.

First, the old criticism: This was not observed experimentally. Second, the sheep flock: It is possible that the diversity of the isolates between Sheep 1 and 2, and Sheep 3, represents a second introduction of MRSA into the flock, not one introduction followed by dissemination. If that happened, then the “distance” between the isolates would not represent the amount of time the infection was circulating among the sheep, and it would be easier to argue for a human-to-animal transmission being as likely as a zoonotic one.

But here is where we get to the identity of the strain, and to why these women were chosen for study at all. When Garcia-Alvarez identified the cattle-related strain in 2011, it was a perplexing finding: The isolates she was working with were demonstrably MRSA, but tested negative for the gene mecA, whose presence is a defining characteristic of MRSA. (It confers resistance to beta-lactam antibiotics, including methicillin, which supplies the M in MRSA.) This was troubling, because it indicated that there might be a class of MRSA that would not be detected by widely used diagnostic tests which look for that gene. Subsequently, it was determined that this strain possessed a variant gene, since dubbed mecC. Because of the group’s 2011 findings — that there might be another livestock-associated strain circulating that was different from our old friend, pig-to-human ST398 — the researchers involved doubled back to look for other evidence of mecC. This included a review of Denmark’s stored samples. The two women farmers were infected with the mecC strain.

So, that raises a further caveat. Because this is not standard MRSA, it would be possible to argue that these findings don’t actually illuminate the animal-to-human resistance-transmission debate. And because it is only two cases, it could be dismissed as a blip.

But if the analysis is correct, then it represents several kinds of potential trouble. First, it reinforces the argument for animal-to-human transmission of resistant bacteria. Second, it emphasizes that such bacteria can be picked up and transmitted even by animals that are not routinely receiving antibiotics; after all, this cow and these three sheep were living on small remote farms, not in a big American CAFO.

And third, it raises the question of how much more resistant bacterial traffic is out there that we are not  detecting. Holmes told me the “host range” — that is, the species detected to be carrying mecC MRSA, now mostly being called CC130 — so far include not just cows and sheep, but horses, rabbits, cats, dogs, deer, seals, rats and wild birds. That is a lot of friendly territory for resistant bacteria to occupy. And it kinda makes you wonder whether we shouldn’t think twice about making so many resistant bacteria available to those species in the first place.

A footnote: On March 14, Rep. Louise Slaughter (D-NY) — Congress’s only microbiologist — reintroduced her bill PAMTA, the Preservation of Antibiotics for Medical Treatment Act, which seeks to reduce routine antibiotic use in agriculture. Yesterday, having seen this paper, she shot a letter off to FDA Commissioner Margaret Hamburg. Key quote: “The current strategy of voluntary guidance regarding ‘judicious use’ of antibiotics is doomed to fail, and it does not reflect the extreme urgency of this issue.”

(And also don’t miss former FDA Commissioner David A. Kessler’s op-ed in the New York Times, denouncing the lack of data the FDA releases on agricultural antibiotic use — the issue explored in my posts on ADUFA. More on that soon.)