No non-profit does buccaneer profiteering quite like the NCAA. 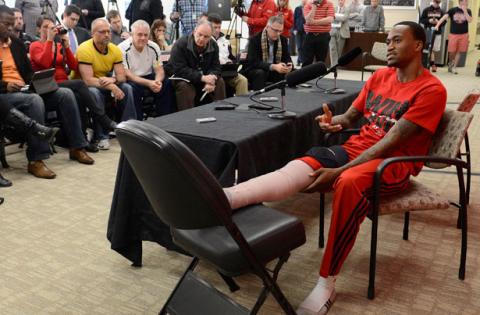 There's been a river of ink already spilled over Louisville guard Kevin Ware's horrific leg injury during the Cardinals' Elite Eight victory over the Duke Blue Devils. Most, with some notable exceptions, have tested the bounds of hokey sentimentality: the classic story of an injured player inspiring his shaken team to victory. Now, however, we’ve reached the point where tragedy becomes farce. On Wednesday we learned that Adidas, in conjunction with the University of Louisville athletic department, will be selling a $24.99 t-shirt with Kevin Ware’s number 5 and the slogan “Rise to the Occasion” emblazoned across the back. His team will also be wearing warm-ups with Ware’s name, number and the slogan “All In." (This tragically is not a tribute to Chris Hayes.)

You almost have to tip your cap: no non-profit does buccaneer profiteering quite like the NCAA. What other institution would see a tibia snap through a 20-year-old's skin on national television and see dollar signs? In accordance with their rules aimed at preserving the sanctity of amateurism, not one dime from these shirts will go to Kevin Ware or his family. Not one dime will go toward Kevin Ware’s medical bills if his rehab ends up beneath the $90,000 deductible necessary to access the NCAA’s catastrophic injury medical coverage. Not one dime will go towards rehab he may need later in life. "Going forward, we don't know what's going to happen in terms of medical expenses," said Ramogi Huma, president of the National College Players Association, a group trying to organize NCAA athletes. "If Kevin has lifelong medical bills associated with his injury, he could be squarely responsible for this…These are things that are not guaranteed to players that are injured, and no matter how hard it might be for people to understand, that's the truth. And that should change."

Where will the t-shirt  money go? Well, Coach Rick Pitino makes more than $4 million a year and will likely see his current five-year deal torn up and renegotiated following the season. The assistant coaches, trainers and support staff will also surely get a taste.*** The Final Four ratings boost spurred from the buzz surrounding Kevin Ware's story will also translate into quite the windfall for the NCAA. The multi-billion-dollar slop bucket of March Madness money, which makes up 96 percent of the NCAA’s operating budget, will pay organization president Mark Emmert's two million dollar salary as well as the paychecks for their 14 vice presidents, each of whom make at least $400,000 a year. They will also to be able to continue to pay off the mortgage on their new $50 million, 116,000-square-foot headquarters in Indianapolis.

The Kevin Ware story is why any person of conscience should support former UCLA player Ed O’Bannon’s lawsuit against the NCAA. The 1995 Final Four star's legal journey began when he came home from work and saw his likeness being used in EA Sports's college basketball video game. O'Bannon v. NCAA has morphed into a mass class action suit demanding that players be compensated if their name and image are being used in the pursuit of profit without permission. Others have joined O’Bannon including one of the great legends and gentlemen in the history of the sport, Oscar Robertson. He was provoked after he noticed that his alma mater, the University of Cincinnati, was producing playing cards with his likeness. As he said to Yahoo! Sports, “The arrogance of the NCAA to say, ‘we have the right to do this’… is what troubles me the most. The University of Cincinnati gets a fee each time my picture is used on a card. I don’t. When I played there, there was nothing like this ever agreed to.”

Athletic directors, like Pat Haden at USC, are already lamenting that if they lose this lawsuit, it could mean no more funding for non-revenue sports. But here’s an idea. Why not just make every coach’s salary no greater than the average wage of a tenured professor? Why not end the practice that has football and basketball coaches stand as the highest paid public employees in their states? That money alone should allow for the funding of non-revenue sports while also allowing players a piece of the four billion dollars in revenue earned off of their images in videogames, commercials and memorabilia.

As for Kevin Ware, he returned to Louisville this week, his coach by his side. Coach Pitino announced that he is healthy enough to be in Atlanta for the Final Four, cheering on his teammates. Ware is now a newly minted media star: a 21st century George Gipp with the benefit of having a story that’s actually true. Unfortunately the school won’t even say publicly, if rehab doesn’t go as planned, whether he’ll still have a scholarship waiting for him when he returns in the fall. The official word from Louisville is that the question is irrelevant because “doctors are expecting a full recovery.” One thing is certain. At least he’ll get a lousy t-shirt.

*** after this article went to print, the Louisville athletic department announced that they would not take any direct funds from these t-shirt sales. Instead profits will go to Adidas as well as Louisville's general scholarship fund. As Brian Frederick of the Sports Fan's Coalition put it, "We can say that shirt money is being laundered."