Well before Title IX was taken seriously, well before there were record ratings for women's sports on TV, before there was the dominance of the U.S. Olympic women's basketball team or the sold-out crowds at the NCAA Women's Final Four, there was Pat Summitt. She turned a women's sports team into a national brand in the 1980s and 1990s. And she did it not by playing by the old, demure, ladylike rules of women's sports, but by crashing the boys' sports party. 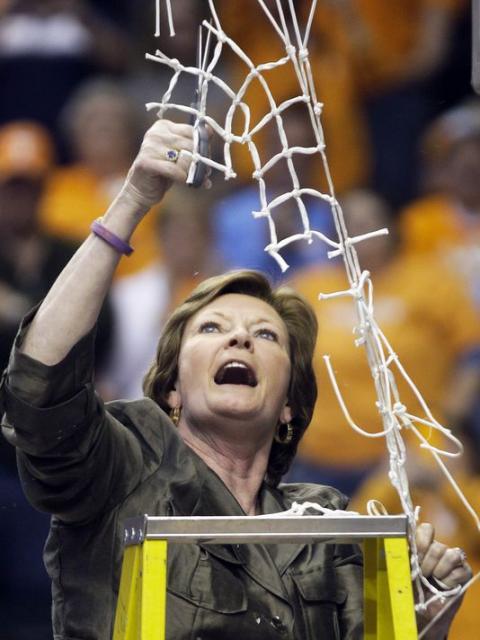 Legendary basketball coach Pat Summitt lost her battle with dementia "Alzheimer's Type" at the age of 64. She made NCAA history with eight national championships and a 1,098-208 record., Photo: Mark Humphrey, AP // USA Today
Every girl and every woman who plays sports, and there are millions of them in this country, owes Pat Summitt one thing today:
A thank you.
Well before Title IX was taken seriously, well before there were record ratings for women's sports on TV, well before there was the dominance of the U.S. Olympic women's basketball team or the sold-out crowds at the NCAA Women's Final Four or the glorious rivalry of Tennessee-UConn, there was Pat Summitt.
As a young head coach earning $250 a month in the mid-1970s, Summitt personally loaded her players' uniforms into a washing machine after each game because she knew if she didn't do it, no one else would. She also drove the Tennessee team van from game to game; money was so tight that one night, she and her players slept in sleeping bags on the other team's gym floor.
They did this willingly, even happily. They didn't know what they didn't have. "We played because we loved the game," Summitt said years later. "We didn't think anything about it."
Everything was new in women's sports back then - even the game itself. Summitt grew up at a time when girls played six-person basketball, which meant three played offense, three played defense, and no one but a rover was allowed to cross halfcourt. The theory was that girls might not be able to give birth someday, or something or other, if they ran full court as kids.
Tell these stories to a 12-year-old girl playing AAU basketball, or the high school girl playing travel soccer, or a college women's lacrosse star, and we know how they'll react. They'll laugh out loud, as well they should. It's unimaginable to them that that's how women's sports in America got their start.
But that is exactly how they began, with women like Summitt washing jerseys while drawing up in-bounds plays. Title IX, the law that continues to empower millions of U.S. girls and women through sports, was signed by President Richard Nixon in 1972. Summitt started coaching Tennessee women's hoops two years later. We can't separate one from the other.
Just as crusading tennis star and women's rights advocate Billie Jean King is forever linked with the early rumblings of Title IX, so too is Summitt. But there is a difference. King came from tennis, one of the few sports that were considered "acceptable" for girls and women as far back as the 1950s and 1960s.
Acceptance for women's team sports came a generation later, if it has come at all. Many adore the U.S. women's soccer team and our college women's basketball programs, but there still are dark corners of American life (sexist sports talk radio, that's you) where even now, women in basketball uniforms are ridiculed rather than revered.
That makes Summitt's grand cultural success at Tennessee all the more meaningful. She turned a women's sports team into a national brand in the 1980s and 1990s. And she did it not by playing by the old, demure, ladylike rules of women's sports, but by crashing the boys' sports party.
She wasn't subtle. She could be mean. She yelled. A lot. She took over every room she entered. She stared down anyone who crossed her. (If it happened to you, and it happened to me, you never forgot it.)
She showed that a woman could be tough and unrelenting and powerful - and be rewarded for it.
Mostly, she wanted to win. And win and win and win. And she did, more than anyone else who has ever coached the college game, male or female. She was a women's basketball coach, yes, but she really was a basketball coach who happened to be a woman.
By every measure, Pat Summitt was a success. Check that. Pat Summitt is a success. She sadly is gone, but everything she worked for lives on.
Perhaps in her dreams she pictured the year 2016 in women's sports. Perhaps not. But we're all here, from the T-ball players and littlest somersaulters to the young travel players and the house-leaguers, from the high school all-stars to the college veterans to the weekend hackers to every single woman preparing for Rio.
And we have just one thing to say:
Thank you.
[Christine Brennan writes columns on national and international sports issues for USA Today. She's also a commentator for ABC News, PBS NewsHour and National Public Radio, and the best-selling author of seven books.]