The Rule of Law in Times of Ecological Collapse

With mass species die-offs, threats to human food supplies, toxicity of air and water, along with deforestation and ocean destruction and the justifiably dominant concern of climate change causing long-term droughts, floods, and extreme storms, the rule of law needs to be applied to the environment. The Green Shadow Cabinet will make putting in place the rule of law a top priority. 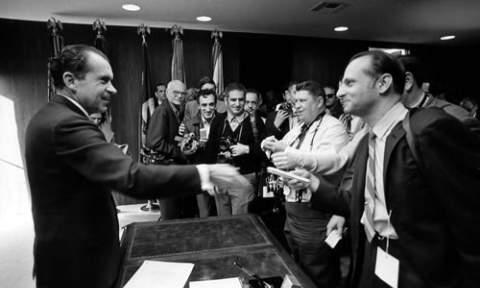 With mass species die-offs, threats to human food supplies, toxicity of air and water, along with deforestation and ocean destruction and the justifiably dominant concern of climate change causing long-term droughts, floods, and extreme storms, the rule of law needs to be applied to the environment.  The Green Shadow Cabinet will make putting in place the rule of law a top priority.

In 1970 the National Environmental Policy Act, signed by President Nixon, took effect.  The law seeks: "To declare national policy which will encourage productive and enjoyable harmony between man and his environment; to promote efforts which will prevent or eliminate damage to the environment and biosphere and stimulate the health and welfare of man; to enrich the understanding of the ecological systems and natural resources important to the Nation..."

We must now make this law a reality.  Since 1970 the law has been manipulated by big business and government to allow environmentally damaging projects to go forward.  NEPA required an Environmental Impact Statement (EIS) before government actions but the failure of this process is evident when the State Department is on the verge of finding the Keystone XL Pipeline has no significant environmental impact even though James Hansen, one of the leading climate experts in the world, describes tapping into the Alberta Tar Sands as "game over for the planet" putting the Earth over the tipping point for climate change.

A process that concludes "game over for the planet" is not a significant environmental impact, it is a broken process. Obviously, climate change impact must be part of an environmental review.

Corporations that profit from investing in tar sands, as well as excavating, transporting, refining and profiting from tar sands, need to be held accountable. They know what they are doing pushes us over the tipping point for climate change; doesn't this make them responsible?

Article image We can no longer exempt oil, gas and other energy polluters from the requirements of environmental laws; they need to be held financially liable for their environmental degradation, not be given tax breaks and corporate welfare.  The rule of law should include the corporate death penalty, revocation of the corporate charter, for corporations that are repeat offenders. As carbon energy grows scarce environmentally damaging excavation increases, e.g. hydro-fracking, tar sands, offshore oil drilling, arctic drilling, uranium mining and mountaintop removal.  This shows the need to end put in place a carbon-free, nuclear-free energy economy by rapidly moving to clean, sustainable energy along with conservation and efficiency. Requiring carbon and nuclear energy sources to pay the real cost of their environmental damage will be a step toward a level playing field with solar, wind, geothermal and ocean energy.

The rule of law must put protection of the planet above profit.  The Congress and executive branch, captured by big business interests emanating from Wall Street, has put profit ahead of the planet.  The recent Monsanto Protection Act is an attack on the rule of law and judicial review in order to protect biotech profits. The rider, with the Orwellian name "Plant Protection Act" was anonymously grafted onto an emergency budget bill, grants immunity to legal challenges to GMO plant products that could be a tremendous risk to the environment and food supply.  The Justice Council of the Green Shadow Cabinet would oppose patenting life forms.

More widely damaging to the rule of law will be the Trans-Pacific Partnership, the largest trade agreement in history, which is a global corporate coup that puts profits ahead of the environment and the people. President Obama has been negotiating the TPP in secret with 600 corporate advisers but hidden from the Congress, the media and American people for three years.  The trade agreement undermines the rule of law by allowing corporations to sue governments in trade tribunals, with judges primarily being corporate lawyers on leave from their corporate job. It puts the potential profits of corporations over environmental and other laws. Once again - the policy is profits before the environment - the opposite of what is needed. This agreement needs to be stopped and other agreements like the WTO and NAFTA reversed so the environment is protected and the people and planet come before profits.

Other countries are recognizing that there is an environmental crisis leading to ecological collapse and are putting protection of the environment in their laws. Bolivia's Law of Mother Earth makes the planet "a collective subject of public interest," and declares both the Earth and life-systems (which combine human communities and ecosystems) as titleholders of inherent legal rights. The law recognizes that the maintenance of life systems, ecological diversity (without genetic alteration), rights to water and air, the interdependence of the components of the Earth and the need to restore ecological systems all need legal protection.

Similarly the Icelandic Constitution, drafted in 2012, states: "All shall by law be accorded the right to a healthy environment, fresh water, unpolluted air and unspoiled nature. This means that the diversity of life and land must be maintained and nature's objects of value, uninhabited areas, vegetation and soil shall enjoy protection. Earlier damages shall be repaired as possible."

The Green Shadow Cabinet recognizes that the rule of law has been battered in recent decades beyond the failure to hold polluters accountable, e.g., the lack of prosecution of financiers whose pervasive fraud and law breaking caused economic collapse, the lack of prosecution of torturers and their enablers, the overuse of lengthy sentencing in racially disproportionate enforcement of drug offenses, the undermining of civil liberties in the name of the war on terror and war on drugs and the prosecution of whistleblowers seeking to bring much-needed transparency to government and big business.  As we work toward establishing the rule of law in the United States, ecological restoration and environmental protection needs to be a top priority.