Leo Branton, who died on April 19, was a member of a formidable defense team that conducted a successful courtroom defense of radical black activist and former UCLA professor Angela Davis. He was a prominent entertainment lawyer who also conducted numerous important civil rights court cases. 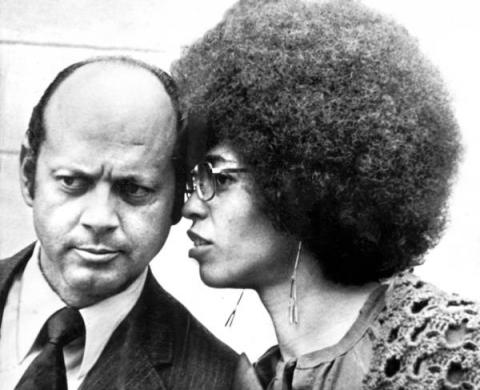 Walk togedder, chillen,
Dontcha git weary. . . .
The strong men keep a-comin' on
The strong men git stronger.
They point with pride to the roads you built for them,
They ride in comfort over the rails you laid for them.
They put hammers in your hand
And said Drive so much before sundown
(from Sterling Brown's 1931 poem Strong Men)

In 1972, it took a world-wide movement, scores of legal and lay volunteers, a cadre of psychologists and psychiatrists, and most importantly a highly skilled defense team to secure freedom for radical black activist and former UCLA professor Angela Davis.  Davis was brought up on charges of murder, kidnapping and criminal conspiracy related to a shootout at the Marin County Jail.  Civil Rights attorney Howard Moore Jr. was retained by Davis and he in turn assembled a formidable defense team that included Leo Branton, Margaret Burnham and Doris Brin Walker:  Burnham, also an activist, grew up with Davis; Walker was a member of the Communist Party USA; and Branton was a highly-skilled civil rights and entertainment litigator with a storied history that included serving as counsel for Academy-Award winning blacklisted writer Dalton Trumbo, actress Dorothy Dandridge, legendary jazz musician Miles Davis and the estate of musical icon Jimi Hendrix. Branton also was part of a team of lawyers who argued Stack v. Boyle, a case involving the arrest of twelve members of the Communist Party, before the US Supreme Court. Born in Pine Bluff, Arkansas in 1922, Branton became an ancestor on April 19, 2013.

He was one of the first to hire consultants to develop psychological profiles of jurors and demand fairer diversity of juries. Psychologist Dr. Tom Hilliard, Anne Ashmore (Poussaint-Hudson) and psychiatrist Price Cobb, Jr. were part of the team who contributed their expertise to voir dire potential jurors.  As secretaries for the defense team, Marlene Cassel and I came to witness his brilliance, legal acumen and forthrightness everyday of that trial.  During a "do wrong" rite of passage related to my personal life, a rather publicly embarrassing moment occurred in which a man who'd ridden across country on his motor cycle tried to retake my heart and another woman involved in the trial publicly claimed him within mere hours of his arrival.  Both Branton and Moore pulled me aside to inquire about my well-being.  I simply was stunned, for in the midst of the tumultuous whirlwind to secure freedom for Ms. Davis; they would demonstrate such concern for my heart then so torn apart. I thought it would never again beat with the love for any other man. But I knew that I could not miss a beat in providing the administrative responsibilities and support that came with working for the defense team.

Branton's confidence was unbridled and although I was not in the courtroom on the day of his closing argument, Howard was ecstatic with the words so strategically crafted and the dramatic tenor of the argument delivered to free Davis. Howard reveled in the fact that he got to walk and work alongside this pioneering legal icon, for those ten months of the trial.  Branton always swooped through the office in suits that bespoke the unbridled and astute confidence and experience he possessed.  He turned litigation into well crafted performance art; after all it was his desire to be an actor that paved the way for him to become a lawyer.  He was exemplary in his ability to cross examine witnesses and during the trial, he put eye witness testimony in a tailspin and as a result, a witness pointed out Kendra Alexander as the woman he saw in the Marin Courtroom and not Angela.  He was so masterful in the courtroom that his legal charisma mesmerized the presiding Judge Richard E. Arnosan, the bailiffs, jurors, spectators and many members of the press; it also totally flummoxed Prosecutor Albert Harris, Jr. and his team.  Harris looked as though he'd been bricked with a brief, the day of the verdict.  I often wonder if the jurors knew that Leo was black.  He had that kind of racial ambiguity, for some, where he could represent either or.

With thirty-six spectator seats available, entry into Courtroom Number one of the Santa Clara County Courthouse in San Jose, California were at a premium and hundreds of people jostled for positions each day to get in on a first come, first-served basis.  On the one occasion Howard was able to get me in, I witnessed firsthand the jaw dropping performance Branton brought into the hallowed halls of that courtroom filled with an historical tension quite like none ever witnessed before in the United States. With so many precedents set in litigating the Angela Davis Trial, it really was indeed one of the major trials of the century.  I'm sure John Jay (first Chief Justice of the Supreme Court), Clarence Darrow (attorney for the legendary, early 20th century Scopes Trial) and Charlotte E. Ray (first known African American woman lawyer) all a turning in afterlife awe.  The power of his closing argument still resonates beyond that chamber into curricula in law schools throughout the United States. The trial transcript of the closing argument (May 30 to June 1, 1972) is available at the Bancroft Library, UC, Berkeley, and the Angela Davis Papers and in the Howard Moore Jr. Papers, Woodruff Library, Manuscripts and Rare Books, Emory University, Atlanta, GA.

We are so indeed each other's harvest.  In December 2012, I invited him to a holiday party that my dear friend Mary Louise Patterson and I gave in LA home.   At 90, he was still litigating and his mind remained legally brilliant.  He spoke eloquently on why that trial set the significant milestones and precedents that it did.  It meant the world to me and others in the room that Branton was there, for there were those for whom Angela Davis was a name that rang familiar, but the associated history unknown.  His presence and words brought a serious dimension of reality to that history.  With a world-wide movement mobilized and upon being acquitted, Branton told Angela that she was the most powerful woman in the world. He felt that dissociating from the Communist Party would make her even more powerful. But her history, values and commitment rested in its ideology to which she remained loyal for decades after her acquittal. To this day, Davis remains unwavering in her commitment to the freedom of political prisoners around the world and still uses her vision and voice as a freedom fighter for social justice, especially as it relates to women.  You can listen to Branton speak at the party by going to this link by videographer Mateenah Floyd-Okanlawon at You Tube: www.youtube.com/watch?v=YvErKfaD7oA

On his 91st birthday, there was a screening of Shola Lynch's riveting documentary "Free Angela Davis and All Political Prisoners." Leo Branton got to see and hear his crucial role, reflected in the compelling historical drama of black and white. The film poignantly captures and reflects the legal brilliance and unwavering compassion of Branton as one of Sterling Brown's "Strong Men."

Daphne Muse is a writer, poet and social commentator. You can read her blogs at www.daphnemuseblogspot.com. She is the Founder & Chief Visionary Officer of Grandmothers Going Global  (www.grandmothersgoingglobal.com ) (c) Daphne Muse, Oakland, California 2013