Obama has painted himself into a corner. 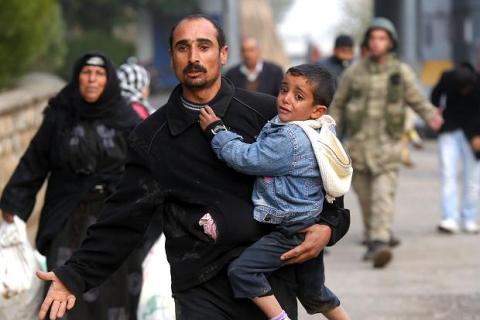 Bibi Netanyahu's Israeli government and William Kristol's neoconservatives are once again pushing for war, this time over allegations that the Syrian regime of Basher al-Assad used Sarin gas against rebels. This campaign for military action has caught the White House on its back foot, largely because President Obama has painted himself into a corner by calling the use of chemical weapons "a red line" and "a game changer."

"The political reality is that he put himself in that position that if the 'red line' is crossed - he made it very clear - it would change his behavior," said Arizona senator John McCain, long a neocon hero. The intelligence "is a compelling argument for the president to take the measures that a lot of us have been arguing for all along."

The intelligence on Syria appears neither negligible nor in any way conclusive. And - as McCain would applaud - it makes more likely the fulfillment of his call to Bomb, Bomb, Bomb Iran, especially since Obama has painted himself into another corner by promising to keep the Iranians from achieving "a nuclear weapons capability."

For those putting on the war paint in Tel Aviv and Washington, the leading question is obvious: Did Assad use chemical weapons that could prove a threat to people throughout the region, Israelis among them? "Yes, but," says the Obama White House in an unexpected letter to Congressional leaders on Thursday: "Our intelligence community does assess, with varying degrees of confidence, that the Syrian regime has used chemical weapons on a small scale in Syria, specifically the chemical agent Sarin."

Officials tell reporters that the assessment was based on soil and blood samples from attacks last months in a village near Aleppo and in the outskirts of Syria's capital Damascus. As far as I can tell, no independent experts have confirmed the testing. More than once bit, more than twice shy.

Could the rebels have used the gas? In March, the Syrian state news agency SANA accused "terrorists" of firing a rocket "containing chemical materials." The Russians, who still support Assad, though with diminishing enthusiasm, backed the claim, and the Israeli minister for strategic affairs, Yuval Steinetz, held open the possibility that the rebels had used the weapons. An Obama administration official said last week that the White House had "no information suggesting opposition groups have chemical weapons capability" and officials continue to believe that "any use of chemical weapons would very likely have originated with the Assad regime."

At the same time, the White House claims that the "chain of custody" of the weapons is not clear and it questions whether the attacks were deliberate or "accidental." This sounds less like a serious intelligence assessment and more like diplomatic language aimed at Assad. As weapons expert Jeffrey Lewis told the Washington Post, "If we're wrong and he's still restraining himself, Assad may conclude that he's already paying the price of using chemical weapons. What we don't want is for Assad to massacre thousands of civilians like Saddam did in Halabja," the Kurdish town that the Iraqi dictator gassed in 1988.

The Israelis and their neocon allies have long pushed for greater US military involvement in both Syria and Iran, but they heightened their war of words only days ago, just after Defense Secretary Chuck Hagel ended his visit. The escalation came at the annual security conference at Tel Aviv University, when Israel's top military intelligence analyst, Brigadier-General Itai Brun, accused Assad's forces of repeatedly using lethal chemical weapons, probably Sarin, against armed rebels. >From fragmentary accounts, Hagel appeared not to have heard Brun's findings while in Israel, an omission that - if true - could hardly have been accidental. In any case, the Israelis have made no secret that they feared Syria's chemical arsenal would end up in the hands of jihadi fighters of the Lebanese Hezbollah.

Once Brun's finding became public, the neocons in the US swung into action. "It is increasingly clear that Basher al-Assad has used chemical weapons in his war against the Syrian people - crossing what President Obama has previously described as a 'red line' for the United States," declared the directors of Foreign Policy Initiative. FPI is the group that Bill Kristol and Robert Kagan founded in 2009 to replace their earlier creation - the Project for a New American Century, which led the way in taking the US to war in Iraq. FPI also provided most of the foreign policy brain trust for Mitt Romney's presidential campaign.

"The United States must take action now both to prevent further use of such weapons and to hasten the end of Assad's rule," the declaration continued. "The alternative is to make it clear, by inaction, that the 'red line' was not intended to be enforced. This will encourage further use of chemical weapons by Assad and perhaps in the future by others."

Besides putting pressure on Washington, the push for military action parallels Netanyahu's comments in Britain last week that he might be ready to abandon his official neutrality on Syria and join with the Sunni Arabs of Jordan and Syria in arming some of the supposedly more moderate rebels. Professor Juan Cole is looking at this closely and is well worth following.

A veteran of the Berkeley Free Speech Movement and the New Left monthly Ramparts, Steve Weissman lived for many years in London, working as a magazine writer and television producer. He now lives and works in France, where he is researching a new book, "Big Money: How Global Banks, Corporations, and Speculators Rule and How To Break Their Hold."