There is a long tradition in this country of children—primarily in rural areas—learning to shoot at a young age. But there is a point where all reasonable people need to admit that a kid is too young to own and/or shoot a real rifle that shoots real bullets. Four years old—the age the Kentucky boy who shot his 2-year-old sister apparently was when he received a Crickett rifle as a gift—is way, way too young. 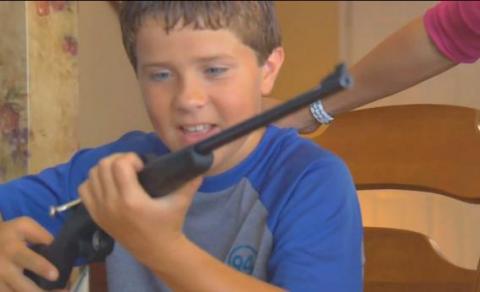 A kid gets the gift of a Crickett rifle. , Screenshot from Crickett commercial.

The Lexington Herald-Leader reports that a 5-year-old boy accidentally killed his 2-year-old sister earlier this week, shooting her with a Crickett .22-caliber single-shot rifle. The boy and his family apparently didn’t realize that a shell had been left in the gun. “Just one of those crazy accidents,” said Gary White, the coroner for Kentucky’s Cumberland County.

The fact that this 5-year-old boy had a rifle wasn’t an accident, though—it had been given to him as a gift the previous year. The Crickett is a small, single-shot starter rifle made specifically for young shooters. It’s produced by Keystone Sporting Arms, a gunmaker that specializes in the manufacture of “quality firearms for America’s youth.” In addition to the Crickett, which is marketed with the tagline “My First Rifle,” Keystone Sporting Arms manufactures the Chipmunk rifle and Chipmunk accessories, though this product page reveals that they’ve discontinued the “Chipmunk 4 x 32 Scope.”

The crickett.com website appears to be down at the moment, but Mother Jones grabbed some images from the site’s “Kids Corner” page that show very small children and even a couple of infants posing with the company’s weaponry. Crickett also advertises its wares in a commercial in which two young boys discuss the awesomeness of child-specific firearms. “Hey, where you going?” one asks. “Shoot my new Crickett rifle,” the other responds happily. The first boy, clutching a soccer ball (a poor substitute for a rifle, we can all agree), looks like he’s about to cry. “I wish I had one,” he says. And then he gets one! And it’s awesome! “My first rifle,” the announcer intones. “A moment you never forget.” He then expounds on the "safety-promoting design" and describes the gun as "soft shooting, affordable, and accurate." (Also note the availability of pink rifles for girls "and even mom.")

As a boy growing up in suburban Chicago, I was not allowed to own actual guns. My friend John had BB guns, and we would occasionally shoot them in his backyard, sometimes at our other friend, Brad, in the course of a cruel game we called “Deer and Hunter.” If my parents had known we were doing that, I suspect they would not have let me play at John’s house any more. If John had had a real rifle, rather than a BB gun, they would probably have sent me to boarding school.

But there is a long tradition in this country of children—primarily in rural areas—learning to shoot at a young age. This was once a practical skill, and occasionally still is, in areas beset by dangerous wild animals; we all remember the tale of how Davy Crockett “killed him a b’ar when he was only three.” (Perhaps relevant: the insectoid mascot of Crickett Rifles is apparently called “Davey Crickett.”) Today, however, with b’ars being much less of a threat than they were in frontier times, most youth are encouraged to shoot at targets.

Kids usually start off with a .22-caliber rifle, because a .22 is inexpensive, simple, and easy to shoot. There are various programs to encourage youth marksmanship: National 4-H Shooting Sports (Motto: “Skills for Life—Activity for a Lifetime”); the Amateur Trapshooting Association’s youth program, called “AIM” (“Academics, Integrity, Marksmanship”); the Youth Shooting Sports Alliance, which urges veteran shooters to donate discarded firearms and “turn your old gun into their new passion.”

I don’t have a huge problem with youth marksmanship programs. Shooting can be a great hobby, and children should be allowed to partake in it if they’re properly supervised and trained in safety protocols.

But there is a point where all reasonable people need to admit that a kid is too young to own and/or shoot a real rifle that shoots real bullets. Four years old—the age the Kentucky boy apparently was when he received the Crickett as a gift—is way, way too young. This tragic Kentucky shooting comes a little less than a month after a six-year-old New Jersey boy was accidentally shot and killed with a .22-caliber rifle by his four-year-old neighbor. “I just heard they were playing shooting,” a neighbor told CBS 2 New York. “The little boy knew where the gun was and he went and got it.”

That’s the problem here. Yes, the Crickett website does depict very small children having a grand old time with their child-sized weapons. But the blame for this tragedy doesn't rest entirely with Keystone Sporting Arms. You also have to look at the parents who were too irresponsible to lock these rifles up some place where children who still have their baby teeth can’t find and shoot them at random. The Herald-Leader story says the parents of the children in Kentucky kept the Crickett rifle “in a corner.” It’s terrible decisions like that, unfortunately, that lead to catastrophic outcomes.