Following a five-day organizing training and strategy summit in Birmingham, members of the labor group OUR Walmart, a non-union organization backed by the United Food & Commercial Workers union, will announce a plan to send civil rights movement–style caravans of workers from around country to converge at the retail giant’s June 7 annual shareholder meeting. 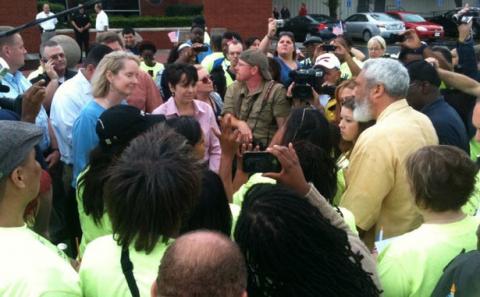 Following a five-day organizing training and strategy summit in Birmingham, members of the labor group OUR Walmart will announce a plan to send civil rights movement–style caravans of workers from around country to converge at the retail giant’s June 7 annual shareholder meeting.

Walmart workers active in OUR Walmart, a non-union organization backed by the United Food & Commercial Workers union, plan to make the announcement on a video live-stream from Birmingham at 4 pm Central Time today. Several days before the shareholder gathering, caravans will leave from several cities around the country, stopping along the way to pick up workers and supporters, and to meet with community activists. OUR Walmart’s plans for the next month also include confrontations between Walmart employees and members of the company’s board of directors.

Los Angeles Walmart worker Tsehai Almaz told The Nation that after visiting the Birmingham Civil Rights Institute and meeting with local clergy, she and other OUR Walmart leaders were inspired to follow the example of the 1961 freedom riders. “I feel like we’re facing many of the same issues,” said Almaz, “even though it’s not necessarily about race—this time it’s about respect. And being able to feed our families, and having good working conditions.” Almaz, a support manager who’s worked for the company for about a year, said that she was driven to join the campaign after she and several co-workers were needlessly injured in a rash of workplace accidents in her store.

OUR Walmart activists were also present at the company’s 2012 shareholder meeting. At that gathering, Walmart workers brought a petition urging the resignation of the company’s CEO and board chair, and read a shareholder resolution from the floor calling for restrictions on executive pay. Since then, Walmart retail workers followed guest workers at a Walmart shrimp supplier, and sub-contracted Walmart warehouse workers, in walking off the job—the first coordinated Walmart retail strikes within the United States.

As The Nation has reported, the current campaign has outpaced past efforts by taking advantage of vulnerabilities in Walmart’s supply chain, developing worker leadership through local shop floor showdowns, and mounting carefully crafted work stoppages designed to engage more workers, while dodging the obstacles facing modern US strikes. Still, OUR Walmart activists remain a small minority: their most significant action so far—a Black Friday strike by some 400 workers—mobilized less than one of every 1,000 direct US Walmart employees.

Today’s announcement will follow a battery of workplace delegations by Walmart employees on April 24. Organizers say workers in dozens of stores went in groups to confront local managers over erratic and insufficient working hours; the campaign said it does not yet have a count of how many workers participated in all. In a January address to the National Retail Federation, Walmart US CEO Bill Simon announced plans to improve scheduling, a long-time grievance of OUR Walmart. Worker activists claimed that announcement as a sign of momentum for their campaign, but said prior to the delegations that they’re yet to see signs of any new policy being put into action.

Asked Friday about OUR Walmart and its allegations regarding wages and scheduling, a Walmart spokesperson referred The Nation to a statement released the same day as the delegations, touting a pilot program to improve scheduling in Denver and in Fort Smith, Arkansas. According to Walmart, the program began there on February 1, will spread in July and will reach all of the company’s US stores by the end of October. A spokesperson called this “a program to provide associates greater visibility into available shifts across their store, giving them the ability to choose more hours for themselves and expand their career path.”

Historian Nelson Lichtenstein, author of The Retail Revolution: How Wal-Mart Created a Brave New World of Business, expressed doubt that OUR Walmart could force Walmart to sit across the table from its employees: “They aren’t going to say, OK let’s sit down. We know that.” However, he said, sufficient sustained pressure could establish de facto “arms-length negotiations” in which OUR Walmart members made public demands, and Walmart, without crediting the critics, made concessions in order to tamp down discontent.

Lichtenstein, who directs the Center for the Study of Work, Labor, and Democracy at the University of California Santa Barbara, said that the OUR Walmart campaign so far appears “pretty staff-driven,” and that he doubts it has developed the “kind of self-sustained, internally generated organizing momentum” that would be necessary for actions to spread to thousands of employees. But Lichtenstein said that given the risk of retaliation, the willingness of activist workers to collectively and publicly make demands of the company is a “breakthrough” which will inspire others to follow. “It opens up the sense of democratic discourse,” said Lichtenstein, “in a company that really does have an authoritarian culture.”

There may be precedent for protests changing Walmart’s employment practices. As Matt Stoller reported in Octobor, recently released 2006 Federal Reserve Open Market Committee transcripts show then–St. Louis Fed President William Poole informing his colleagues that a contact at Walmart had told him that the company was raising wages in part “because of all the controversy about Wal-Mart.” Poole’s comments suggest that the union-backed campaigns against Walmart of the mid-2000’s, which fell far short of the current effort in terms of mobilizing actual Walmart workers, may have embarrassed the company enough to shake loose some cash. But no campaign to date has yet compelled the company to cede power to its employees.

“It’s time for this generation basically to accept the baton and continue the movement,” said Almaz. “Because it didn’t end in the ’60’s. That just started the movement—it’s continuing with how Walmart is treating its associates.” “I think now is the time to make a change,” he added, “before we don’t have anything left to fight for.”