In Another Blow to NLRB, Court Says Bosses Don't Have To Notify Workers of Rights

Appeals Court rules NLRB cannot require employers to post notices informing employees of their labor rights. The decision, which comes less than three weeks after lack of regulatory enforcement led to a fertilizer plant explosion in West, Texas that killed 14 and left about 200 injured, opens the door for businesses to challenge requirements that workers be informed of their health, safety and employment rights. 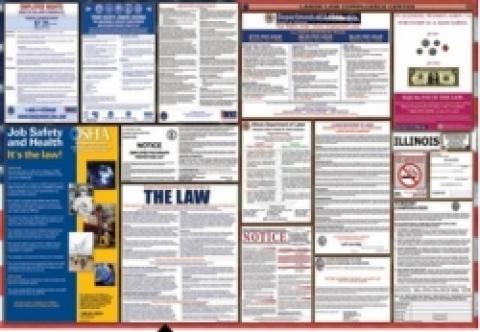 Thanks to a district court ruling this week, employers could challenge requirements to put up posters like this one notifying workers of their rights., (Posters from the Labor Law Compliance Center)
Yesterday, a conservative panel of the D.C. Circuit Court of Appeals issued a decision that sharply undermines the power of the National Labor Relations Board (NLRB) and, more broadly, of the government as a whole to regulate business. The ruling marks the second time this year that the court has radically undercut the NLRB. In January, the court held that Obama's 2012 recess appointments to the board were invalid, effectively undoing more than a year of NLRB decisions.
Now, the body often referred to as "the second most important court in the land, after the Supreme Court," has held that the NLRB cannot require employers to post notices informing employees of their labor rights. The decision, which comes less than three weeks after lack of regulatory enforcement led to a fertilizer plant explosion in West, Texas that killed 14 and left about 200 injured, opens the door for businesses to challenge requirements that workers be informed of their health, safety and employment rights.
Currently, numerous federal laws obligate employers to notify workers about a host of rights, by either posting notices in the workplace or providing workers with documentation. For example, businesses must notify employees about dangerous chemicals in the workplace under the Occupational Safety and Health Act (OSHA); of their wage and hour rights under the Fair Labor Standards Act (FLSA); of their insurance and pension plans under the Employee Retirement Income Security Act (ERISA); of their rights not to be discriminated against because of their race, sex, religion, age, disability, and other protected categories under Title VII, the Age Discrimination in Employment Act (ADEA), and the Americans with Disabilities Act (ADA); and of their right to take leave from work for certain medical or family-related reasons under the Family and Medical Leave Act (FMLA).
In light of all this, a rule passed by the NLRB in 2011 requiring employers to post notice of employee labor rights broke no new legal ground. However, in a bizarre decision, the district court held that the poster requirement violates the First Amendment rights of employers.
When the NLRB proposed the law in 2010, its rationale was a diminishing awareness of labor rights among workers. The board wrote:

The Board was established to ensure that employers and, later, unions respect the exercise of employees' rights under the NLRA [National Labor Relations Act]. For employees to exercise their NLRA rights, however, they must know that those rights exist. There is reason to think that most do not.

The board attributed the growing ignorance of workplace rights to the declining reach of unions that once educated employees as well as the increase in immigrant and high-school workers. In one study cited by the board, three-quarters of high-school students surveyed did not know the basic tenets of the NLRA. In another, when high school students were asked whether workers have the right to decide whether a company becomes unionized, more than two-thirds either answered, incorrectly, "no" or said they did not know.
Against this background, the board took the relatively rare step of issuing a proposed rule, and after receiving 7,034 comments, a final rule in 2011. The rule sought to place labor rights within the set of rights of which employers must notify their employees. For the most part, employers comply with these notification laws without complaint. However, in a reminder of the extent to which many American employers loathe even the possibility of unions, the National Association of Manufacturers (which spent the 20th century fighting labor rights legislation) filed suit over the new rule, arguing that it violated the First Amendment rights of over 6 million employers.
The D.C. Circuit's broad ruling striking down the NLRB rule opens the door for employers to challenge other notice requirements. The court purportedly examined Sections 6 and 8(c) of the NLRA, but really performed an aggressive and activist First Amendment analysis, The decision states that in requiring employers to post notice of employee rights, the government engages in compelled speech in violation of the First Amendment. In so doing, the court privileged the free speech rights of corporations above the freedom of association rights of individual workers.  Though this was not a case dealing specifically with a question of the individual rights of corporations, it followed a disturbing trend of the courts to place rights of corporations above the rights of individuals.
Though the decision's official holding concerns only the provisions of the NLRA, the reasoning would also seems to cover, for instance, OSHA posters that tell workers of their right to confidentially report workplace hazards to regulatory agencies and not suffer employer retaliation. These posters, along with the many other notifications of rights, serve as important reminders to workers that the law confers upon them certain rights that employers may not abridge.
Since the West, Texas disaster, there has been broad discussion of America's unacceptably high levels of workplace fatalities. Should any new workplace safety regulations or enforcement mechanisms result, this new decision could render them moot. And if employers now challenge their responsibility to post workers' health and safety rights, the decision could move the country backward, making American workplaces far less safe.
[Moshe Z. Marvit is an attorney and fellow with The Century Foundation and the co-author (with Richard Kahlenberg) of the book Why Labor Organizing Should be a Civil Right.]
[Thanks to the author for sending this to Portside.]