Poorer nations lose three times more money to havens a year than they get in aid. The G8 has the chance to change this. 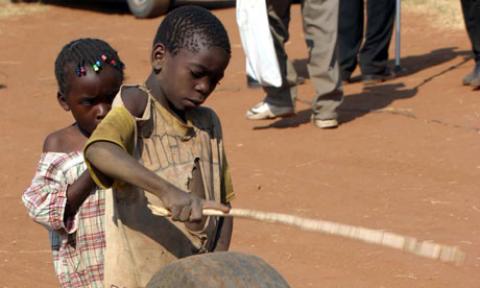 The Guardian has brought yet more news about the widespread use of tax havens by some of the world's largest multinationals operating in developing countries. From ActionAid's own investigations we know that these tax havens can all too often provide vehicles for tax avoidance that hits the world's poorest hardest.

In the case of just one FTSE100 multinational we recently investigated – Associated British Foods, maker of Ryvita and Silver Spoon sugar – we found the company had used tax haven conduit companies to legally avoid enough Zambian tax to put 48,000 children in school. Zambia is a nation where almost half of children fail to complete their education.

Tax haven secrecy can also be used to deflect scrutiny from a range of unaccountable transactions in developing nations. Kofi Annan's Africa Progress Panel last week highlighted mining deals involving two FTSE100 multinationals, carried out through companies in the British Virgin Islands, Panama and Gibraltar, which the panel claims have deprived the Democratic Republic of Congo of an estimated $1.36bn – almost twice the country's education and health budgets combined.

From near-deserted Caribbean islands to major financial centres, tax havens offer a harbour for wealth and profits siphoned from around the world. Tax havens provide the legal machinery for tax avoiders, and protection for illegal tax evaders, denying developing economies the public revenues needed for hospitals, schools, clean water and functioning roads. The figures are staggering. According to the Organisation of Economic Co-operation and Development, developing countries lose three times more money to tax havens each year than they receive in aid.

The statistics cannot, of course, show the tax impact of each tax haven company. Some may indeed have real business, and not simply be avoiding taxes in places where real business is done. But this is precisely the point: corporate reporting fails to show the transactions and tax bills of multinationals' operations in many of these jurisdictions. And these same jurisdictions often deny this information to under-resourced tax authorities in the world's poorest countries too.

Tax haven structures may be nearly universal, but they are not a fact of nature in modern business. Financial services firm Hargreaves Lansdown and mining company Fresnillo, for instance, have no tax haven subsidiaries at all, despite operating in sectors that are no strangers to "offshore". Others are making efforts at least to disclose their tax structures around the world: when ActionAid put questions about their tax haven companies to all FTSE100 companies, 15 responded with significant extra details.

Yet overall there is little incentive not to place profits and assets in tax haven companies, or to disclose these profits and assets, unless governments themselves end the secrecy and abusive tax regimes that tax havens offer. The countries represented at June's G8 have a unique combination of economic and political weight, responsibility and jurisdiction over the problem. The UK alone is responsible for one in five of the world's tax havens, more than any other single country in the world. Yet while the UK and other wealthy countries have recently begun to push their tax havens to disclose the financial assets that their taxpayers hold offshore, these deals as yet leave developing countries out in the cold.

The G8 can and must commit to ending the anonymous ownership of tax haven companies and trusts, and making tax havens disclose the information that tax authorities around the world desperately need. To fix the biggest part of this problem the information it generates must be available for all countries – including the poorest – from day one.

When the UK government convenes the leaders of the world's wealthiest countries at the G8 summit this June, it has an opportunity, an interest and a duty to do something extraordinary: to tackle one of the biggest hidden obstacles in the fight against poverty by putting an end to tax havens. With David Cameron, George Osborne, François Hollande, Angela Merkel, other world leaders and ordinary taxpayers calling for change, this is a once in a lifetime opportunity. None of us – from the richest to the poorest countries – can afford for the G8 to miss it.

[Richard Miller is the executive director of ActionAid UK]