Genocide in Guatemala: The Conviction of Efrain Rios Montt

The soiled hands of this incident are many. They did not start or stop with Rios Montt.

May 15, 2013 by Binoy Kampmark Dissident Voice
Printer friendly
Genocide in Guatemala: The Conviction of Efrain Rios Montt Published May 15, 2013 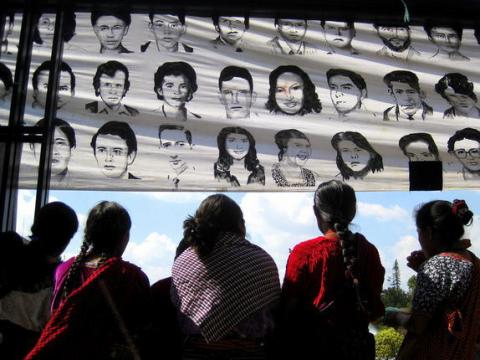 Guatemalans demanding the trial of Efraín Rios Montt raise a banner commemorating those who were disappeared., Photo by Natasha Pizzey-Siegert

It has been hailed as the first conviction for genocide of a former head of state in his own country, and certainly the first of a former Latin American strongman. Former Guatemalan dictator Efrain Rios Montt was convicted by a Guatemalan court on Friday for his participation in crimes against the Mayans during his rule in 1982 and 1983.  His sentences were steep: 50 years for genocide and 30 for crimes against humanity.

As ever with genocide, evidence of an intentioned plan to destroy a race had to be shown.  The three-judge panel led by Yassmin Barrios was satisfied that the definition had been made out, finding that there had been a clear and systematic plan to exterminate the Ixil people.  Prosecutors allege that up to 1,700 of the Ixil Maya were killed, in addition to torture, rape and the destruction of villages.  The acts had occurred as part of a policy of clearing the countryside of Marxist guerrillas and sympathisers.

The heart of the defence by Rios Montt was that, as a political leader, he could not be held accountable for military matters conducted in a rural province some few hours northwest of the Guatemalan capital.  “I never authorised it, I never signed, I never proposed, I never ordered that race, ethnicity or religion to be attacked.  I never did it!”   In this, he was echoing the sentiments of the Japanese General Tomoyuki Yamashita, who was found constructively guilty for having not stopped the massacres that took place in the Philippines.

Yamashita did have a point, and one picked up by the dissenting judges of the U.S. Supreme Court.  To hold such a figure to account in circumstances of military emergency, when contact lines were severed, and the army was fighting for its survival, was a tall order.  There was little evidence that those troops had acted under his orders.  But Rios Montt could hardly claim to have been Yamashita and, according to the judges, “was aware of everything that was happening, and did not stop it, despite having the power to stop it.”

The trial proved a thorough affair, featuring extensive use of forensics, the examination of mass graves and the DNA of skeletons therein.  It was grim but important work, and constituted but a small part of what was a civil war of mass murder.  Between 1960 and 1996, Guatemala saw conflict that claimed the lives of more than 200,000 people.   Prior to that, a U.S.-sponsored overthrow of the democratically elected Jacobo Arbenz Guzman ensured that the country would be doomed to decades of bloody instability.

It is often argued that trials do not provide a means of genuine restorative healing to parties or societies. Rios Montt will not be seen as a criminal by conservatives who feel he performed a sterling job in ensuring that the country did not fall into the clutches of left wing revolutionaries.  The Cold War subtext here was that he was, if anything, heroic in holding the fort.

Besides, the current Guatemalan president, Otto Perez Molina, refuses to accept that genocide ever took place.  This may not be surprising given that Molina’s name came up in trial testimony, in which a former soldier claimed  he had ordered executions   while serving in the military of the Rios Montt regime.   “When I say that Guatemala has seen no genocide, I repeat it now after this ruling.  Today’s ruling is not final… the decision will not be final until the moment they run out of appeals.”

There will also be consternation that the atrocities of the government, rather than those of the rebels, have featured prominently.  That the former feature, however, is due to the sheer disproportionate role played by the rulers and paramilitary allies.  The 1999 report by the country’s truth and reconciliation commission claimed that the government’s role in the atrocities, along with its allies, was a hefty 93 per cent.

The soiled hands of this incident are many.  They did not start or stop with Rios Montt.  Will the individuals who also cast money and material the way of such regimes be held to account?  A case against the higher-ups, and those complicit beyond the borders of the country may well be in the offing, though that will take time.  The edifice of accountability is gradually being built.  International law, as ever, takes steps not so much in strides as in awkward stumbles, but when it does reach important junctions, effects are felt.  What happens with the appeal will be telling.

Binoy Kampmark was a Commonwealth Scholar at Selwyn College, Cambridge. He lectures at RMIT University, Melbourne and can be reached at: bkampmark@gmail.com.