The "deficit problem" is man-made. The deficit is now down 60 percent as a percent of gross domestic product. It is down more than the deficit hawks Alan Simpson and Erskine Bowles asked for. This rapid reduction is seriously hurting the economy and jobs, but demands for cuts continue. It is time for Congress and the President to "pivot" to focusing on our real problems: the jobs gap, the wage gap and the trade gap. 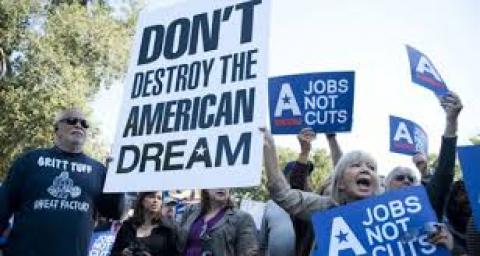 Both Republicans and Democrats, while they have different preferred approaches, are heavily focused on cutting budget deficits and relieving the long-term debt situation of the country. Yet unemployment remains at an unhealthy 7.6 percent, Think Progress
The deficit is now down 60 percent as a percent of gross domestic product. It is down more than the deficit hawks Alan Simpson and Erskine Bowles asked for. This rapid reduction is seriously hurting the economy and jobs, but demands for cuts continue. It is time for Congress and the President to "pivot" to focusing on our real problems: the jobs gap, the wage gap and the trade gap.
Mythical Deficit Problem Solved
The "deficit problem" is man-made. When Bill Clinton was president we were paying off the debt. George W. Bush turned Clinton's budget surpluses right around, calling deficits "extremely positive news" because they would later force cuts in government. Ronald Reagan's "strategic deficits" began a strategy to make the borrowing appear so bad that the public would be panicked into allowing cuts in the things government does to make our lives better - so the wealthy few could have even more wealth and power. (Reagan tripled the national debt, Bush doubled it again.)
So after Bush we had a problem. When `W' left office the budget deficit was $1.4 trillion. Then after Obama took office Wall Street and the right started terrifying the public about deficits and outlining their "solutions": Cut government, cut regulation of the giant corporations, cut entitlements, cut investment in infrastructure, privatize public assets, cut the safety net, etc... Cut the things that government does to make our lives better (government spending) and cut the things government does to protect us from the immense power of the insanely wealthy and their giant corporations.
But something got in their way. The deficit started coming down before all of the "solutions" could be forced on us. The deficit is now down 60 percent as a percent of GDP from the level Bush left behind (see the chart below).
The 2010 "Simpson-Bowles" plan called for austerity to lower our budget deficit to 2.3 percent of GDP by 2015. But the latest CBO budget projections http://cbo.gov/publication/44172 say the deficit will be 2.1 percent of GDP in 2015.
Ezra Klein, in "CBO says deficit problem is solved for the next 10 years," writes, "...the debt disaster that has obsessed the political class for the last three years is pretty much solved, at least for the next 10 years or so."
Problem solved - austerity and the sequester can go away. For those of us outside Washington and in the real world we've been saying all along this isn't the problem, the problem is that there aren't enough jobs, people's wages are stagnant or falling and the country is losing more than a billion dollars a day from bad trade deals. We have real problems to solve, so let's get to it. Let's address the job gap and the wage gap and the trade gap.
The mythical budget deficit is problem gone; let's worry about our real problems.
The Economy can't Recover Without An Emphasis On Fixing Jobs, Wages And Trade
The economy can't recover until housing recovers. Housing can't recover until people can afford to buy houses. People can't afford to buy houses until they can get jobs, and those with jobs can't afford to buy houses until wages go up. Wages cant go up until the trade problem is fixed. And the trade problem is killing jobs.
Explained a different way:
They say that housing is the key to recovery from recessions. Forbes: Buffett Says Housing Is Key To Recovery, USA Today: Housing holds key to full job growth rebound, Time: Can the Economy Get Healthy Without a Housing Recovery? CAP: A Strong Housing Market Is Critical to Our Economic Recovery and so on. But on NPR Monday, in Is The Housing Recovery Just A Mirage?, they made the key point: "What we really need to do is focus on jobs and unemployment to get people able to have the money to spend on a house."
Yes, jobs are being created. We were losing 800,000 jobs a month when President Obama took office, and now we are gaining just enough jobs each month to keep up with and get a little bit ahead of growth in the labor force. But there are not enough new jobs and too many of the new jobs are low-wage jobs. So the middle class is still shrinking, and people can't afford to buy houses to get a real housing recovery underway.
We need more jobs. We have a jobs emergency.
The Jobs Gap
The Hamilton Project explains the jobs gap as "the number of jobs that the U.S. economy needs to create in order to return to pre-recession employment levels while also absorbing the people who enter the labor force each month." They say:

One more thing:  "As of April, our nation faces a "jobs gap" of 10.0 million jobs."
10 million jobs still needed just to catch up to where we should be. That is huge.
Where did the jobs go?
The Trade Deficit
According to economist Dean Baker the trade deficit represents American consumers spending their money overseas rather than here. And that means those dollars are "creating jobs" there, not here. His point was driven home last year when he wrote that, "The main factor leading to job loss [in the 2000s] was the growing U.S. trade deficit."

The trade deficit represents millions of jobs. That more than $1 billion per day we send out of the country represents how many jobs at $50,000 per year? That's good jobs sent out of the country every day of every week of every year. That is the trade deficit.
We can start by fixing currency manipulation. A "strong dollar" is a lot of the problem because it means things made here cost more and things made elsewhere cost less. So we aren't able to sell as much and we are buying more than we should.
A February report from the Economic Policy Institute, "Reducing U.S. trade deficit will generate a manufacturing-based recovery for the United States and Ohio,"   written by Robert E. Scott, Helene Jorgensen, and Doug Hall, looked at the job-cost of the portion of the trade deficit that is caused by currency manipulation. The report concludes that fixing just this problem would reduce the trade deficit by between about $190 billion and $400 billion over the course of three years and bring us between 2.2 million and 4.7 million U.S. jobs. Doing this would lower the unemployment rate between 1 percent and 2.1 percent and increase GDP between 1.4 percent and 3.1 percent.
That is just the portion of the trade deficit caused by currency manipulation and you can see the immense cost. Imagine if we took that step as well as other steps to eliminate the trade deficit.
The Wage Gap
A trade deficit also means that our workers not only face high unemployment but are also pitted against exploited workers in countries where those workers don't have a say in how things are done. This inevitably drives down wages as employers move jobs offshore and remaining workers compete for jobs, all the while afraid to make waves and ask for raises lest their job be shipped out of the country as well.
American workers face high unemployment and then on top of that they face competition from people who are paid a fraction of what Americans earn. The trade deficit represents a significant contributor to this problem.
Fixing the trade deficit also fixes some of the wage gap. But we also need strong unions and strong government to combat the power of the giant corporations and demand that regular working people a fair share of the proceed of our economy.
The "Sequester" And Other Budget Cuts Just Make Things Worse
On top of this, our own government is aggravating the problem, with this wealthy-donor driven focus on deficit reduction instead of job expansion.
For example, Politico: Sequestration gets real for furloughed workers,

Sequestration went from wait-and-see to here-it-is Tuesday when the number of furloughed federal workers hit an eye-popping 820,000. Defense Secretary Chuck Hagel told 680,000 civilian workers they'd have to stay home 11 days without pay. About 140,000 workers from other government agencies have already been given furlough notices.

The number is expected to grow ...
The deficit is not a problem. The Simpson-Bowles target has been reached and passed. The austerity is harming the economy and hurting people. Congress and the President should pivot to jobs. They need to fix the jobs gap, the wage gap and the trade gap, and if they continue to ignore these real problems it is up to We, the People to apply the necessary pressure to make them do it.
[Dave Johnson has more than 20 years of technology industry experience including positions as CEO and VP of marketing. His earlier career included technical positions, including video game design at Atari and Imagic. And he was a pioneer in design and development of productivity and educational applications of personal computers. More recently he helped co-found a company developing desktop systems to validate carbon trading in the US.]