For all the talk of scandal regarding the IRS targeting groups named “Tea Party” or “Patriot,” it’s not hard to draw an additional lesson from the facts of the case — a pattern that follows the well-worn model of the modern political age: Benefits flow to the rich and the well-connected, with pain for the rest. 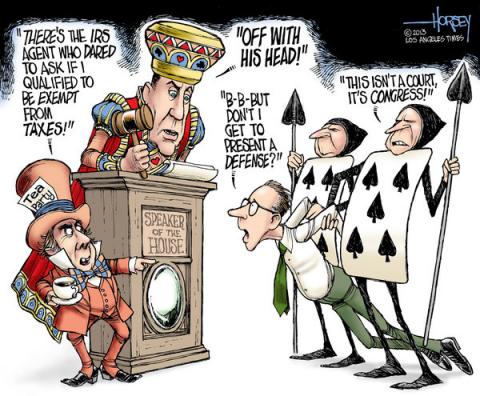 For all the talk of scandal regarding the IRS targeting groups named “Tea Party” or “Patriot,” it’s not hard to draw an additional lesson from the facts of the case — a pattern that follows the well-worn model of the modern political age: Benefits flow to the rich and the well-connected, with pain for the rest.

The Cincinnati incident, which has already cost the job of Acting IRS Commissioner Steven Miller (who was not the commissioner when the scandal occurred – this would be like the State Department reacting to the tragedy at the Libyan consulate by firing a low-level bureaucrat coincidentally named Ben Ghazi), is definitely scandalous in its own right. As the Treasury Inspector General report details, it’s completely inappropriate for the IRS to burden any subset with invasive information requests based merely on keywords or policy positions.

But let’s consider how this played out. The New York Times’ Nick Confessore reported this week that the groups applying for tax-exempt 501(c)(4) status and singled out for inspection were primarily small, local conservative (and a few liberal) organizations, who barely spent any money on elections. Meanwhile, groups like Karl Rove’s Crossroads GPS and the liberal Obama-supporting Priorities USA, who did the lion’s share of campaign spending among these types of organizations, not only faced no such examination, but survived multiple efforts by campaign finance reform advocates to get the IRS to revoke their tax-exempt status because of their voluminous political activities.

Why would this be the case? First of all, a 501(c)(4) group need not apply with the IRS to prove its tax-exempt status; it can simply self-declare, avoiding an initial review process. The IRS encourages groups to file applications, but those with the resources to hire a smart tax lawyer know they aren’t required to go through the trouble. Needless to say, most local Tea Party groups didn’t have that kind of professional expertise. So generally speaking, the small fish revealed themselves to the IRS initially, and since Congress requires reviews of every application for tax-exempt status, these groups become the low-hanging fruit, prone to investigation.

Furthermore, Tea Party groups did themselves no favors by filling out the applications in an amateurish manner, according to Pulitzer Prize-winning former reporter for the New York Times and columnist at TaxAnalysts.com David Cay Johnston. “It’s like applying for a mortgage,” Johnston told Salon. “If you write it out wrong, you’re going to get flagged. And there are examples of these groups saying they’re not political and then saying their goal is to influence legislation.”

Crossroads GPS apparently did file an application for tax-exempt status, but it had very smart tax form preparers who knew how to exploit the ambiguites in the 501(c)(4) statute. The tax code says these groups must “exclusively” engage in the vague-sounding “social welfare activity,” which suggests a ban on political spending. But the IRS subsequently interpreted this to mean that groups fall within the rule as long as they don’t “primarily engage” in political activities. Since the Citizens United ruling, which heralded the growth of the 501(c)(4) sector because corporations could donate to these tax-exempt groups without disclosing their donations, savvier groups have simply worked to stay a hair under 50 percent with their campaign spending, putting them in the clear. David Cay Johnston cited this as a major problem with how the IRS defines social welfare organizations. He said, “Is there any married person in America who doesn’t understand exclusivity? 49.9 percent is not exclusive.”

It’s pretty simple, then, to figure out what took place. The IRS, faced with the enormous task of dealing with a surge of 501(c)(4) groups taking advantage of an often contradictory law, performed triage by taking the path of least resistance – going after the most obvious targets, who didn’t have the resources to artfully stay within the tax laws, or to fight back against invasive reviews. They shied away from the heavily lawyered-up big-money groups, and instead focused on battles they thought they could win.

This has precedent within other parts of the IRS. According to data from the Transactional Records Access Clearinghouse at Syracuse University, IRS audits of the largest and richest corporations have steadily declined since 2005, down 22 percent in the ensuing four years and even more from 2011-2013. In the same period, the agency accelerated its scrutiny of small and midsize corporations. Since 2000, the IRS has been more likely to audit the working poor, individuals and families making under $25,000 a year, than those making over $100,000 annually. The middle class received disproportionately more audits throughout the past decade as well. An IRS unit formed in 2009 called the Global High Wealth Industry Group, designed to give special attention to tax compliance of high-wealth individuals, performed exactly two audits in 2010 and 11 in 2011.

Salon asked David Cay Johnston, author of many of the above-linked reports, whether it was fair to assess the IRS fixing its attention on more vulnerable populations as a pattern. “We know broadly that when government takes enforcement actions, it tends to go after the little guy,” he replied. Johnston gave the example of so-called financial fraud prosecutions that target penny-ante operators instead of the largest Wall Street institutions. And just as the Justice Department tends to avoid suspects with more clever lawyers, the IRS could shy away from more fearsome individuals and groups as well.

There is one alternative explanation. Johnston explained that the IRS budget has shrunk 17 percent since 2002. And yet Congress has loaded on the agency more responsibilities, between the Affordable Care Act, orders to deal with offshore accounts, and other matters. This has only grown worse with the indiscriminate 5 percent sequestration cuts. “There’s no way they can do all these things they’ve been asked to do,” Johnston said. “Imagine if the head of Nordstrom announced in November that they would eliminate half the store clerks right before Christmas shopping season. Everyone would say that’s bad. But that’s what Congress did to the IRS.” And this is true of the nonprofit division in particular.

Visit any office location in America where fewer employees have to produce more work, and what do you see happen? They take shortcuts, as the only way to keep up with the workflow. That’s precisely what we saw with the so-called rogue agents using “Tea Party” or “patriot” as keywords to trigger additional scrutiny. The IRS routinely lumps organizations by category, for the purposes of equal treatment but also to save time. In other divisions of the agency, claiming a particular deduction will often trigger an audit. These heuristics reveal an agency that has to get by on the cheap, using crude automation to get their jobs done. And not only did it backfire in this case, it predictably swept up the less savvy, more resource-starved organizations.

There’s a certain poetry to all this. Congress knows full well that defunding the IRS will lead to these outcomes, and that gives a definable benefit to the rich and powerful, who know how to slip through the cracks of the tax code. “For a big corporation wanting to play fast and loose, this is manna from heaven,” David Cay Johnston said. “They’re the ones this is helping: the political donor class. It’s a subtle way of taking care of your friends.”

In remarks yesterday, President Obama stated that “we have to make sure the laws are clear, so we can have confidence that they are enforced in a fair and impartial way.” Yet like so much in America, this fairness and impartiality rarely crosses class lines. An underfunded IRS means a direct cash subsidy for the top 1 percent. It’s a peculiar Occupy Wall Street-style byproduct of a scandal that’s supposed to be about the Tea Party.