Backed by security forces, bosses at Arabtec - a massive construction firm with interests across the oil-rich Gulf states - ended a strike on Monday, but the fallout continues as more workers are receiving deportation orders. The strike ended after management refused to accept demands for increased wages from people earning about $200 a month to complete mega-projects in 40 degree Celsius heat. 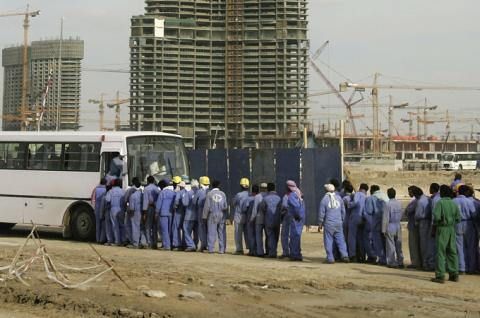 The kefala system prevents foreigners from changing jobs without permission from their company, [GALLO/GETTY]

Dubai, United Arab Emirates - A world away from the glitzy skyscrapers and pulsing nightclubs of downtown Dubai, Bangladeshi labourer Mohamed Ashraf stares at the metal gates of his labour camp, terrified about his future after management broke a strike at the company where he has worked for six years.

Backed by security forces, bosses at Arabtec - a massive construction firm with interests across the oil-rich Gulf states - ended a strike on Monday, but the fallout continues as more workers are receiving deportation orders.

"Between 20-25 people just got the [deportation] letter now," Ashraf, a scaffolding installer at Arabtec, told Al Jazeera on Wednesday after receiving a phone call from a co-worker.

"When we got the news of the [first] deportations [on Monday] everyone came down shouting. When the police came, we just went back to our rooms. People were trying to be part of the group without coming to the front," he said.

Unions and strikes are illegal in Dubai and across the Gulf and rather than demonstrating or holding placards, a few thousand workers simply stayed in their accommodations last weekend and didn't show up for work.

The strike ended after management refused to accept demands for increased wages from people earning about $200 a month to complete mega-projects in 40 degree Celsius heat. Worker demands varied from a monthly pay raise of between $100-$135, while others wanted free food that they say was promised to them.

Arabtec, Dubai's largest construction firm, has tens of thousands of employees and contracts to work on the city's airport, the Abu Dhabi branch of the Louvre museum, and other high-profile projects.

It's unclear how many workers downed their tools or how many received deportation orders, although it seems dozens if not hundreds will be forced to leave the country they have helped to build.

A call to Arabtec's media office rang unanswered Thursday, and an emailed request for comment was not returned.

"Arabtec has been working closely with the UAE Ministry of Labour, the Dubai Police and the concerned security authorities to resolve as soon as possible a partial workers stoppage by a limited number of Arabtec labour employees," the company said in a filing on Tuesday.

Projects will be delivered on time in spite of the strike, the company said. The Labour Ministry had said that Arabtec was paying the workers according to contracts.

Dubai is an autonomous city and part of the United Arab Emirates, a federation run by an unelected emir where the press is censored and public demonstrations are illegal.

The camp where Ashraf lives with some 2,500 Arabtec employees is located in Sonapur or the "land of God", a series of dusty streets and barracks-style labour camps guarded by private security and home to about 200,000 workers.

Arabtec was among the companies that built the Burj Khalifa, the tallest building in the world [Getty Images]
"We live with five men to a room and 40 or 50 men share a bathroom," Syed Khaled, a concerete mixer for Arabtec, told Al Jazeera. "The company is very cruel and going on strike is a good idea."

Khaled said he earns about $102 per month, less than what he would make in his native Bangladesh. The difference, he said, is that the work in Dubai is steady, whereas at home he might be employed one month and then have no job for the next two.

Other workers, including some who supported the strike, said the money they are earning in Dubai is far better than anything they could hope for back home."The strike ended because of pressure from higher management and police," he said.

"It's appalling," she told Al Jazeera of the situation in Dubai and across the Gulf. "The governments and employers must sit down and respect the rights of workers to bargain collectively. Most companies are forcing their workers to live in squalor. An unconscionable number of workers die due to unsafe conditions. These governments are using and abusing migrant workers."

Known for its Ferraris, "seven-star" hotels and other ostentatious displays of wealth, less than 20 percent of the UAE's roughly 7.9 million residents are citizens. To attain citizenship, a person must usually demonstrate a blood connection on the father's side to the Emirates' original inhabitants.

Migrant workers choose to come to Dubai on their own free will, and most locals believe labourers are offered a better life in the UAE than what's available in their home countries.

Some labourers seem to support that view. "We are happy to be here; this is not our country. We could have left anytime," Mahmoud Jamal, a labourer from Bangladesh, told Al Jazeera. "We are willing to work. We just want to stay here."

Jamal, a strike supporter, said he's now worried he won't be able to renew his residency visa as a result of the labour dispute.

Under the kefala system, a worker's legal status in the country is tied to his employer. Foreigners cannot change jobs without permission from their company. Supporters say these rules allow citizens to retain their rights while creating economic stability, while critics say they are a form of modern servitude.

The wage gap between Emirati citizens and blue-collar migrant workers is massive [Reuters]
A call to Dubai's Ministry of Labour office was put on hold for 30 minutes without a response on Thursday. An email requesting comment was also not answered.

A minority in what they consider their own country, the idea of independent trade unions for foreigners is unfathomable to most UAE citizens. Strikes and protests by workers are considered a security risk in a city that prides itself on being open to investment, tourism and different cultures.

Supporters of Dubai's economic model say a lack of collective bargaining rights is good for workers, as it leads to more growth and job creation. Part of the reason why countries such as France are in the economic doldrums, they say, is because the labour market is overly regulated and employees spend more time protesting than actually working.

For many residents and most citizens, the Dubai model of cheap, imported labour and no union recognition has been a boon. If hundreds of Arabtec employees are deported, there will be thousands of new recruits clamouring to take their place, leading some to argue the Dubai model is a success as workers understand their own self-interest and can vote with their feet.

Annual per capital income in the UAE is $48,158, according to the Heritage Foundation think-tank. In the span of 20 years, the city has transformed itself into an international hub for tourism, real estate investment and financial services.

But the wage gap between Emirati citizens and Western technocrats on the one hand, and the working class on the other, is massive.

Many labourers arrive in Dubai saddled with debt, usually a result of visa fees and other charges imposed by local labour agents in their home countries. These practices are illegal in Dubai, but tracking perpetrators in Bangladesh or India is almost impossible for police forces in the UAE.

The UAE can't be held accountable for corrupt labour practices in migrant-sending countries, according to some analysts.

Most labourers seem to reserve their scorn for local bosses, unscrupulous visa agents in their home countries, and labour camp officials.

Dubai's ruler has initiated a campaign to thank blue-collar workers for their service to the country [Reuters]
"We are sweating, working hard in the hot sun and we aren't getting benefits," Arshad Hamid, a scaffolding installer who has been with Arabtec for six years, told Al Jazeera. "The office boys are getting benefits and their salaries are higher."

Other workers complained that foremen receive regular wage increases, but they do not.

Stuart Poole-Robb, the CEO of KCS, a London-based consultancy, once worked in the UAE helping with security for a petroleum facility. He said conditions in the labour camps could pose a risk to the UAE's broader stability.

"I am stunned salaries are still at the level they are," Poole-Robb told Al Jazeera. "By treating people like this they [the Emirates] are opening themselves up to serious problems."

Agents working for Iran, a country the Gulf states fear, were stirring up trouble in the labour camps around the petroleum facility, he alleged, and bad working conditions made some workers receptive to their overtures.

"The camps could end up acting like a Trojan horse," he said. "These workers deserve a living wage like anyone else."

Dubai's backers say some companies do abuse workers, but these are isolated incidents that could happen in any society rather than structural problems.

Reports including Human Rights Watch's "Building towers, cheating workers" and a documentary from the BBC programme Panorama exposing abuses at Arabtec have irritated some Emiratis, who believe the country is unfairly targeted by Western organisations.

In response to the bad public relations stemming from the treatment of workers, the UAE has instituted some changes, including the creation of a telephone hotline through which employees can report abuse. Rights groups, however, say there has been virtually no improvement for workers in the past decade.

Earlier this year, Sheikh Mohammed Bin Rashed Al Maktoum, Dubai's ruler and the UAE's vice president, initiated a campaign to thank blue-collar workers for their service to the country.

But Mohamed Ashraf isn't feeling particularly appreciated. As he ponders his next move, the long-time labourer doesn't have much optimism.

"If we formed a union and we had a leader he would take our problems to management and they would just deport the leader," he said. "I don't think the situation will improve."

* Names have been changed to protect the identities of workers