Celebrated author Alice Walker urges singer Alicia Keys not to perform for apartheid Israel, as does Pink Floyd frontman Roger Waters. Boycott, because Palestinian conditions are worse than they were in US South 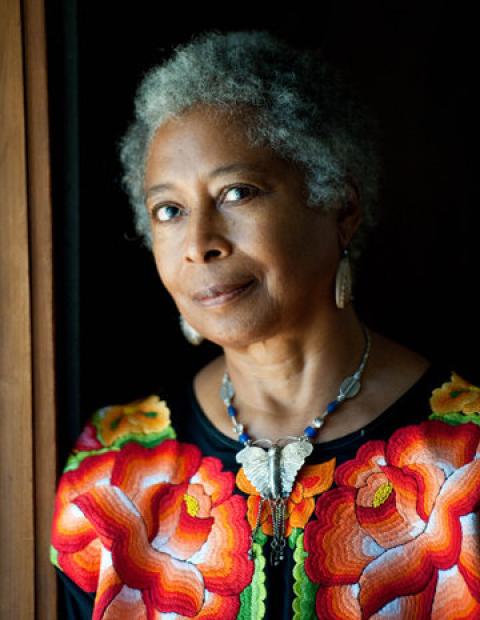 Alice Walker,Photo by Scott Campbell / Mondoweiss
Activists worldwide are encouraging US singer-songwriter Alicia Keys to respect the Palestinian-led boycott call and cancel her upcoming July performance in Tel Aviv. As The Electronic Intifada previously reported, organizational appeals, a Facebook group and a petition - with more than 6,000 signatories - have been initiated by boycott activists asking Keys to cancel her show.
The US Campaign to End the Israeli Occupation has also posted a list of actions in which activists can take part, including sending photos of "pictures/infographics of examples of Israeli occupation and apartheid (the wall, house demolitions, checkpoints, etc); Palestinian popular resistance; and/or of yourself holding signs of solidarity with Palestinians ... This is an opportunity for some culture jamming asking activists to submit pictures with messages urging her to not play in Israel," the US Campaign adds.
This week, Pulitzer Prize-winning author and social justice activist Alice Walker wrote an open letter to Keys, urging her not to cross the international picket line, and to learn more about Israel's policies against Palestinians.
The letter reads:

Dear Alicia Keys,
I have learned today that you are due to perform in Israel very soon. We have never met, though I believe we are mutually respectful of each other's path and work. It would grieve me to know you are putting yourself in danger (soul danger) by performing in an apartheid country that is being boycotted by many global conscious artists.
You were not born when we, your elders who love you, boycotted institutions in the US South to end an American apartheid less lethal than Israel's against the Palestinian people. Google Montgomery Bus Boycott, if you don't know about this civil rights history already. We changed our country fundamentally, and the various boycotts of Israeli institutions and products will do the same there. It is our only nonviolent option and, as we learned from our own struggle in America, nonviolence is the only path to a peaceful future.

If you go to my website and blog alicewalkersgarden.com http://alicewalkersgarden.com/  you can quickly find many articles I have written over the years that explain why a cultural boycott of Israel and Israeli institutions (not individuals) is the only option left to artists who cannot bear the unconscionable harm Israel inflicts every day on the people of Palestine, whose major "crime" is that they exist in their own land, land that Israel wants to control as its own.
Under a campaign named `Brand Israel,' Israeli officials have stated specifically their intent to downplay the Palestinian conflict by using culture and arts to showcase Israel as a modern, welcoming place.
This is actually a wonderful opportunity for you to learn about something sorrowful, and amazing: that our government (Obama in particular) supports a system that is cruel, unjust, and unbelievably evil. You can spend months, and years, as I have, pondering this situation. Layer upon layer of lies, misinformation, fear, cowardice and complicity. Greed. It is a vast eye-opener into the causes of much of the affliction in our suffering world.
I have kept you in my awareness as someone of conscience and caring, especially about the children of the world. Please, if you can manage it, go to visit the children in Gaza, and sing to them of our mutual love of all children, and of their right not to be harmed simply because they exist.
With love, younger sister, beloved daughter and friend, Alice Walker

credit - (Wissam Nassar / Maan Images)
Adding to the appeals to Alicia Keys, Roger Waters of Pink Floyd also wrote a letter to the singer on Wednesday, 29 May. The letter, entitled "Just Another Open Letter in The Wall," is posted on the Palestinian Campaign for the Academic and Cultural Boycott of Israel (PACBI) website.  It reads, in part:

I read today Alice Walker's eloquent and moving entreaty to you in her open letter. It is hard to add anything except to implore you to follow all the links she has directed you to.
... I had reason last December to write a letter to Stevie Wonder http://electronicintifada.net/tags/stevie-wonder  to encourage him to withdraw from an engagement in LA. It was a Gala to raise funds for the Israeli Defense Force. I wasn't the only one to write, Archbishop Desmond Tutu, the great advocate of peace and reconciliation, was among many, many others who wrote as well. To Stevie's great credit he withdrew.
We are all part of the same old story, nothing has changed since the bad old days of apartheid South Africa and Segregated America. We must stand united with all our brothers and sisters against racism, colonialism, segregation and apartheid.
Please, Alicia, do not lend your name to give legitimacy to the Israeli government policies of illegal, apartheid, occupation of the homelands of the indigenous people of Palestine.
Others may try to persuade you that by playing in Israel you may magically effect some change; we know that this is not true, appeasement didn't work with South Africa and it has not worked in Israel. I know I tried it ten years ago, things have only got worse.
I appeal to you to join the rising tide of resistance. Join the many millions of us in global civil society who stand together on the side of justice and peace for all humanity. "We shall overcome one day."

[Nora Barrows-Friedman is a staff writer and editor with The Electronic Intifada, and contributes to Al-Jazeera English, Inter Press Service, Truthout.org, Left Turn magazine, and various other international media outlets. From 2003-2010, she was the Senior Producer and co-host of Flashpoints, an award-winning investigative newsmagazine operating out of KPFA/Pacifica Radio in Berkeley, California. Nora has been regularly reporting from Palestine since 2004.]
Subscribe to Portside