A former shipfitter at the Fore River Shipyard in Quincy and a longtime labor union activist, Mr. Richardson cofounded Military Families Speak Out, an organization that mushroomed to include more than 4,000 families, along with chapters in 18 states. Mr. Richardson, who directed the Labor Extension Program at the University of Massachusetts Lowell and trained union leaders around the world, died May 4 in his Jamaica Plain home. He was 60. 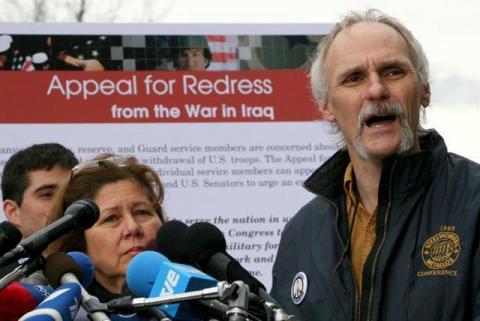 Mr. Richardson helped Military Families Speak Out to litigate against the Bush administration.,

When his son was deployed to the Persian Gulf in 2002, Charley Richardson was terrified he would be killed in what Mr. Richardson believed was an unjust war about to unfold in Iraq.

“My Son is a Marine. Don’t Send Him to War for Oil,” said a homemade sign, bearing a photo of his son Joe, which Mr. Richardson and his wife, Nancy Lessin, took to antiwar protests that fall.

Hecklers called him a traitor and a disgrace to his son. Others were buoyed by Mr. Richardson’s audacity. The couple’s phone began to ring with calls from families whose loved ones were headed to war.

A former shipfitter at the Fore River Shipyard in Quincy and a longtime labor union activist, Mr. Richardson created a rudimentary website and cofounded Military Families Speak Out, an organization that mushroomed to include more than 4,000 families, along with chapters in 18 states.

Mr. Richardson, who formerly directed the Labor Extension Program at the University of Massachusetts Lowell and trained union leaders around the world, died May 4 in his Jamaica Plain home of prostate cancer, which was diagnosed six years ago. He was 60.

With his signature handlebar moustache and United Steelworkers jacket, Mr. Richardson led the first members of Military Families Speak Out in news conferences and in litigation against the Bush administration that failed to prevent the war.

“When I think of him, I just think about how he was quietly there to encourage us and support us,” said Anne Sapp of Billerica, who joined after her husband was deployed to Iraq in 2004.

“He and Nancy didn’t tell us what to say,” Sapp said. “He gave us the opportunity to stand up and inform people about our experiences having a loved one sent to Iraq.”

“Charley won people over with the strength of his ideas,” Gerard said. “He never tried to control the discussion, or the debate, which a lot of people in the labor movement try to do. He would listen and then respond.”

Mr. Richardson “wasn’t the kind of guy who hung out in the bar after an event,” Gerard added. “He’d rather talk policy than sports.”

At scores of training sessions with labor leaders, Mr. Richardson urged workers to practice “continuous bargaining,” and never cede control of the shop floor to management.

A paper Mr. Richardson authored, titled “Tricks and Traps,” became an influential guide in the labor movement. In it, he warned about what he characterized as the pitfalls of cooperating with management, instead of bargaining.

“His ‘Trips and Tricks’ opened the eyes of countless union members who knew something smelled fishy about the nice phraseology of cooperation,” labor journalist Jane Slaughter wrote in a tribute to Mr. Richardson, which was published in Labor Notes magazine.

Born in Providence, Mr. Richardson was the middle child of five siblings. His father, Peter, was director of admissions at the Massachusetts Institute of Technology from 1972 to 1984.

Growing up, Mr. Richardson discovered his love of hiking in the White Mountains of New Hampshire, where his family was active in volunteering to help hikers on the Appalachian Trail.

He graduated from Hampshire College in Amherst and was active in protests against the war in Vietnam.

“Charley was a guy who had very strong values and felt compelled to live and act on those values, but to do it in a way that brought the rest of us along,” said Mike Sands, who first met Mr. Richardson during their freshman year at Hampshire and marched with him at protests in Washington.

“There are people who live their values and frankly are no fun to be around. Charley wasn’t like that. Charley believed strongly in his values, but he could laugh at the vagaries of the world and make the connections across things that allowed him to lead a full life and bring others into it. His passion didn’t alienate other people, it brought you into his life,” said Sands, who has a farm in Flint Hill, Va., and specializes in food distribution links involving small farms.

After college, Mr. Richardson wandered for a few years, according to his wife. He worked on a ranch in Wyoming and traveled to Chile, where he was deeply influenced by revolutionary struggles.

Back in New England, he drove a bus for the Boston public schools during the early years of desegregation and eventually moved to Philadelphia.

In 1976, he became a shipfitter for what was then Sun Ship Co. and became a union activist. As shop steward, he supported a new grass-roots movement that wanted companies to reveal the details of chemical exposure workers faced, his wife said.

Mr. Richardson, whose first marriage ended in divorce, was back in Boston by 1983 and began working in the Quincy shipyard, where he was a union safety steward.

Nancy, who also was divorced, was working on labor health and safety issues when they met. She had two young daughters and Mr. Richardson had twin sons. They married in 1988.

“He was just the most remarkable man who, in a very quiet way, presented as a dedicated activist wanting to change the world for the better,” said his wife, who works for United Steelworkers’ Tony Mazzocchi Center for Health, Safety and Environmental Education.

She added that he had “a deep, deep respect for the working class.”

In addition to his wife, Mr. Richardson leaves two sons, Nick of Jericho, Vt., and Joe of Davis, Calif.; his parents, Peter and Corinne of Exeter, N.H.; a sister, Marcie of Jamaica Plain; three brothers, Chris of Chevy Chase, Md., Peter of New Jersey, and John of Golden, Colo.; two stepdaughters, Nikki Rivera and Nina Lessin-Joseph, both of Roxbury; a granddaughter; and two grandsons.

A celebration of Mr. Richardson’s life will be held at 3 p.m. June 29 at the University of Massachusetts Boston Campus Center Ballroom in Dorchester. Burial will be private.

“He saw the work he did as a long struggle and he recognized intuitively that to sustain yourself in that, you had to be ready to celebrate the small victories and not be beaten down by the enormity of the challenges,” Sands said.