The Problem with Partition

A human rights approach could lead the way to resolving the problems of partition and the problems of a two state solution. International human rights treaties offer states alternatives to partition. Instead, human rights conventions offer types of integration that protect the existence and identity of national linguistic, ethnic, and religious groups. 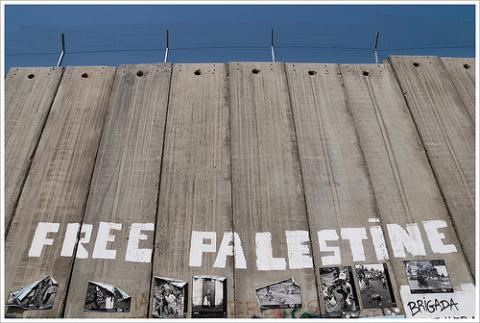 Graffiti marks the wall dividing the Palestinian city of Bethlehem from Israelis in the West Bank., Creative Commons/Montecruz Foto.

If the day comes when the two-state solution collapses, and we face a South African-style struggle for equal voting rights (also for the Palestinians in the territories), then, as soon as that happens, the State of Israel is finished. - Ehud Olmert, former prime minister of Israel

While international attention has shifted to the war in Syria, little media focus is given to the recent successful initiative at Blair House in Washington, D.C., between Secretary of State John Kerry and Qatar's Foreign Minister Sheikh Hamad bin Jassim al-Thani on behalf of Arab League states. Sheikh Hamad agreed with Secretary Kerry to endorse the American backed proposal for a two-state solution that partitions Israel in order to create a new Palestinian state. As Arab state representatives retreated from their prior demands that Israel return to its pre-1967 borders, the Arab League initiative represents progress toward a peaceful resolution of the Israeli-Palestinian conflict. Israeli West Bank barrier

Currently, Israelis and Palestinians live interspersed together within non-contiguous borders. However, the problem with partition is that it divides the population based upon ethnic, racial, religious, or linguistic characteristics. Partition actions use types of profiling to assign people to states based upon their human characteristics. The use of profiling contradicts human rights because equal treatment requires that people be recognized as individuals irrespective of their ethnic, racial or religious identity. So, Israelis and Palestinians must reject obnoxious forms of human profiling should they agree on a partition plan. This poses a particular challenge for Israel because it is the homeland of the Jewish peoples who are themselves a persecuted religious group.

International human rights treaties offer states alternatives to partition. Instead, human rights conventions offer types of integration that protect the existence and identity of national linguistic, ethnic, and religious groups. Human rights distinguish integration from that of assimilation in which a group's ethnic characteristics, including language, education, culture, and religion is melted away into the so-called melting-pot to blend with that of the majority. Instead, integration guarantees autonomy (self-government) by permitting minorities to perpetuate their unique characteristics. Since Israelis and Palestinians live interspersed they are already compelled to cooperate on areas of mutual responsibility such as border security, migration, right-of-return, dual-citizenship, public services, trade, and employment.

Article 27 of the International Covenant on Civil and Political Rights recommends standards to protect the existence and identity of minority groups that include forms of self-governance. Also, increasing numbers of state constitutions recognize self-government for domestic minority groups, with some guaranteeing the right to secession. Examples of this can be found in Ethiopia, Fiji, Papua New Guinea, the Philippines, and Spain. These approaches offer a continuum of remedies short of statehood. For example, Canada established the Nunavut territory that protects the Inuit peoples (former Eskimos). It also initiated a prestigious Royal Commission on the Aboriginal Affairs to study the history of Aboriginal problems and recommend actions to correct injustices. Because each case is different such studies about the plight of minorities and indigenous groups are critical as they help states choose the appropriate remedial policies. The Royal Commission recommended the creation of a House of First Peoples as a branch of the Canadian Parliament to permit Aboriginals equal representation. This is an example of best practices that could assist the Palestinians. Other states are implementing different forms of autonomy (self-government) to support aspiring nations. A few examples are Great Britain's Westminster Parliament devolution schemes for Wales, Scotland and Northern Ireland; Finland's Accession Treaty for the Swedish populated Aland Islands; the Nordic Council of Minister's initiative on Sami autonomy; and the Italy and Austria treaty granting autonomy to Trentino-South Tryrol. israeli settlement in the middle of hebron, palestine

A flag marks an Israeli settlement in the Palestinian city of Hebron. Credit: Creative Commons/Jordan Klein.

So far, Israelis have taken actions that are contrary to partition. For instance, Israel's ruling Likud party promotes settlement on Palestinian populated territories, namely, the West Bank. However, Israeli settlement policies have the unintended consequence to assimilate Palestinians into the Israeli population. Some Israelis describe their goal as Eretz Yisrael, meaning, greater Israel. These Israelis make a biblical claim to annex the West Bank (Judea & Samaria). Israeli territorial expansion has been so successful that Israeli Prime Minister Benjamin Netanyahu himself warned about Israel's demographic time bomb, that is, the inevitability of a Palestinian majority in Israel. Several demographic studies about high Palestinian birth rates by The Palestinian Central Bureau of Statistics, as well as the Arab Strategic Report projected a Palestinian majority (2025-2048).

A human rights based approach could assist both Israel and the Palestinians. This is because human rights contain reciprocal responsibilities against irredentism, as well as requires a commitment to state unity. Also, human rights do not exclude a partition of Israel. In fact, they can help to facilitate this but in a manner that comports with other important rights, such as the rule of non-discrimination. Human rights merely require that human groups treat each other with what legal philosopher Ronald Dworkin termed "equal concern and respect."

William K. Barth is a lawyer who researched international minority rights. His book is titled On Cultural Rights: The Equality of Nations and the Minority Legal Tradition (Martinus Nijhoff). Dr. Barth was awarded his doctorate in politics from the University of Oxford. He currently practices law in California.