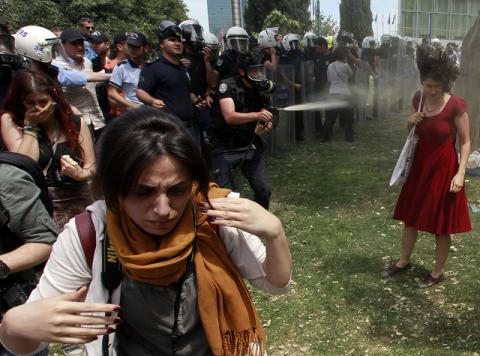 A Turkish riot policeman uses tear gas as people protest against the destruction of trees in a park brought about by a pedestrian project, in Taksim Square in central Istanbul May 28, 2013., REUTERS/Osman Orsal

Twenty more protesters were arrested after a fifth day of protests, even as Turkey's deputy prime minister has apologised for "excessive violence" against protesters trying to save a park in Istanbul.

It is unclear whether the remarks made on Tuesday by Bulent Arinc, who is standing in for the prime minister, Recep Tayyip Erdogan, while he is out of the country, were towing an official government line.

Arinc admitted the state had acted harshly when it sent in police to clear environmentalists participating in a sit-in protest to save Istanbul's Gezi Park last week.

"At the beginning of the protests, the excessive violence used against people concerned about the environment was wrong. It was unfair and I apologise to those citizens," he said.

"The government has learnt its lesson from what happened. We do not have the right and cannot afford to ignore people. Democracies cannot exist without opposition."

However, Arinc refused to reconcile with those who joined the later anti-government demonstrations, in which two people died.

"The ones who caused the destruction to the public property and the ones who are trying to restrict people's freedoms, we do not need to apologise," he said.

Arinc was speaking after a meeting with President Abdullah Gul who, contrary to Erdogan, has praised the mostly peaceful protesters as expressing their democratic rights.

Yavuz Baydar, a political analyst for theToday Zaman daily, said the comments were significant and amounted to a rebuke for Erdogan from within his AK Party.

"Most probably [Gul and Arinc's comments] did not have the sanction of the prime minister," Baydar told Al Jazeera, noting that both were among the founding fathers of the AK Party.

"[Arinc] apologised clearly for the police brutality and the excessive use of tear gas, and he sent some ambiguous but clearly understood messages to Erdogan for his perceived arrogant speech. Also, he raised the possibility of a referendum on [the] Taksim building project."

Thousands of people have been injured in five days of demonstrations amid attempts by the police to contain protesters with tear gas, water cannons and baton charges.

The latest crackdown in Istanbul came on Tuesday evening, with police arresting at least 20 people in the Istanbul district of Dolmabahce, Al Jazeera's Gokhan Yivciger said.

A 22-year-old man died during an anti-government protest in a city near the border with Syria, with officials giving conflicting reports on what caused his death.

The Hatay province governor's office initially said Abdullah Comert was shot on Monday during a demonstration in the city of Antakya.

It backtracked after the province's chief prosecutor's office said an autopsy showed Comert had received a blow to the head and that there was no trace of a bullet wound.

Celalettin Lekesiz, Hatay governor, did not specify whether the man died after being hit in the head by a gas canister.

Another man was killed in an accident with a taxi in Istanbul.

In Tuesday's other major development, thousands of public-sector workers began a two-day strike in solidarity with the anti-government protesters.

The confederation, which has an estimated 240,000 members in 11 unions, said the strike would last until Wednesday.

Al Jazeera's Rawya Rageh, reporting from the capital Ankara, said that the strike was significant.

Turkey's Human Rights Foundation claimed more than 1,000 protesters were subjected "to ill-treatment and torture" by police.

Despite facing the biggest challenge to his rule since he came to office in 2002, Erdogan left Turkey earlier on Monday on an official visit to Morocco, where he insisted the situation in his country was "calming down".

He earlier rejected talk of a "Turkish Spring" uprising by Turks who accuse him of trying to impose religious reforms on the secular state, and dismissed the protesters as "vandals", stressing that he was democratically elected.

Erdogan has blamed the protests on "extremists", "dissidents" and the main opposition Republican People's Party.