The civil liberties group said leaked details of the case could portray the suspect in a triple murder in Waltham in an unfair light. 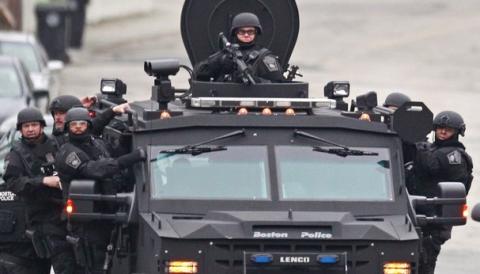 Police patrol through a neighborhood in Watertown, MA, while searching for a suspect in the Boston Marathon bombings. All residents of Boston were ordered to stay in their homes as the search for the surviving suspect in marathon bombings continued., The Redding Record (CA) / AP Photo/Charles Krupa
The American Civil Liberties Union has joined in calling for an independent investigation of the shooting death of a man who reportedly confessed to the 2011 triple murder in Waltham, according to the Boston Globe.
The ACLU told the Globe it was worried about the differing accounts of the death of Ibragim Todashev, 27, in his Orlando, Fla., home. Todashev - formerly of Watertown - was reportedly in the process of confessing to the murders when he was shot and killed by the FBI.
Various media accounts differ on whether Todashev was armed and other details of the incident. The FBI has launched an "internal review" into the shooting and has previously said Todashev was killed during a violent confrontation with the agent.
Todashev's confession reportedly implicated himself and accused Boston Marathon bomber Tamerlan Tsarnaev in the September 2011 murders of Erik Weissman, Brendan Mess and Raphael Teken in a Harding Avenue home.
Tsarnaev knew Todashev through their mixed martial arts training. Authorities have reportedly concluded Todashev and Tsarnaev committed the murders as a drug theft.
The ACLU's senior policy counsel, Michael German, told the Globe he was worried that leaked details of the incident could cast Todashev in a bad light without knowing the full story.
Todashev's family, friends and the Council on American-Islamic Relations have also called for an independent investigation, according to the Globe.
Also, the Russian government has requested investigation files on the death of Todashev, according to the Globe. The FBI said it will not be releasing any more info on the shooting.