Sharp cuts in government spending implemented March 1 as part of the sequester are slowing the recovery. The federal government shed another 14,000 workers in May, for a total of 45,000 jobs cut over the past three months. The federal work force now is smaller than at any time since February 2008. 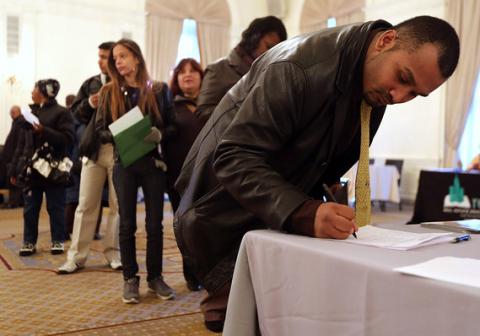 The U.S. economy added a respectable 175,000 jobs in May, slightly above the average of 172,000 per month over the past year. This good news overall was driven by private-sector employment gains, as federal and state governments continued to work against recovery by shedding workers.

Sharp cuts in government spending implemented March 1 as part of the sequester are slowing the recovery. The federal government shed another 14,000 workers in May, for a total of 45,000 jobs cut over the past three months. The federal work force now is smaller than at any time since February 2008. Economists estimate that the combined effect of the payroll tax increase (800,000 fewer jobs in 2013) and sequestration (750,000 fewer jobs from March–December 2013) means that the U.S. economy will create 142,000 fewer jobs each month for the rest of this year compared to what it would have created without the cuts and tax increase. Most of these jobs will be lost in the second and third quarters of 2013. 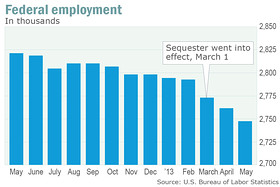 In some ways, the economy looks better: The Dow Jones Industrial average (DJI:DJIA)  is up by 2,580 points (21%) over the past year (as of yesterday), home prices are up in all 20 cities tracked by the Case-Shiller home price index, and the economy has added jobs every month for the past 32 months.

But this growth has not been sufficient to pull down the still-historically high number of unemployed Americans. As a result, the share of Americans with a job remains lower than during the early 2000s, early 1990s, and early 1980s recessions.

As of May 2013, there are almost 12 million people who would have jobs today if our current employment rate matched its peak from December 2006 — 58.6% — before the start of the Great Recession.

With an unemployment rate stuck at 7.6%, the pace of hiring must quicken in order to pull all the unemployed back into jobs. A stubbornly high 4.4 million people are among the long-term unemployed — those who have been pounding the pavement and searching for work for at least six months.

Because the pace of job creation remains too slow to bring back full employment, millions of people have given up searching for work. Over the past year, the U.S. population has grown by 2.4 million, but less than one-third of those have joined the labor force. Adult men’s (men aged 20 and over) labor-force participation rate has stayed at 72.7 percent since March — the low hit in August 2012 and lower than any other month since 1948.

The number of people applying for unemployment benefits has fallen to a near-four-year low, and while this means layoffs have abated, it does not mean the problem of long-term unemployment has been solved. Among those out of work and searching for a new job, 37.3% have been doing so for at least six months, and the typical unemployed worker takes 17.3 weeks to find a new job, compared to only 8.5 weeks when the unemployment rate was 4.6 percent in 2007, just before the start of the Great Recession.

A housing rebound has typically led past recoveries, and while the current housing recovery has shown up in the jobs data in recent months, hiring slowed in May.

After losing 2,000 jobs in April, construction added 7,000 jobs in May, but this is far below the pace of 29,000 per month in the first quarter of 2013. Residential construction was strong in April, adding 9,600 new jobs, but fell to just 900 jobs in May. The slowdown may be due to more hiring earlier in the spring due to unseasonably warm weather.

Wages are falling in inflation-adjusted dollars, both due to the high unemployment, as well as because too many new jobs are in low-paying sectors. Over the past three months, wages rose by an annualized quarterly rate of 1.4%, below the rate of inflation as measured by the Consumer Price Index for All Urban Consumers, or CPI-U, which increased 2% over the past 12 months. This is to be expected: As is well known in economics, higher unemployment is associated with lower wages. Thus, the current policy of focusing on deficits is not only adding to our unemployment woes but is also limiting the potential growth in consumption — and thus growth more generally — through lowering real wages.

While this month’s job gains aren’t bad, without austerity we would have seen a much better number.

Today’s report should be yet another warning bell to policymakers to change their tune. It should also give the Federal Reserve pause in terms of rethinking their current $85-billion-a-month bond-buying program, and it suggests that it may be time to relax the commitment to extremely low inflation.

This is no time for austerity. Our priority must be economic growth, the kind of growth that leads to strong and stable job creation.

Heather Boushey is the Chief Economist at the Center for American Progress.Click to Pl