Low-cost labor has attracted Western brands to the Southeast Asian country and garments now account for around 75 percent of its exports, but strikes over pay and working conditions have become common. Thousands of workers at Sabrina (Cambodia) Garment Manufacturing Corp went on strike for higher pay from May 21. 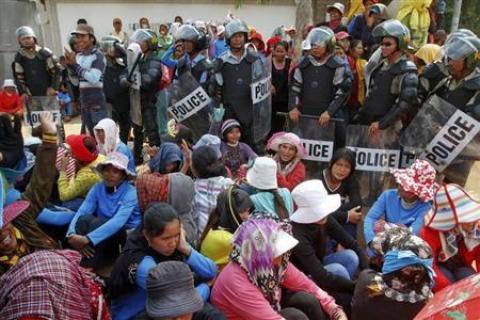 Garment workers sit beside police officers during a protest in front of a factory owned by Sabrina (Cambodia) Garment Manufacturing in Kampong Speu province, west of the capital Phnom Penh June 3.,Reuters/Samrang Pring
PHNOM PENH - Nearly 300 Cambodian garment workers who produce clothing for U.S. sportswear company Nike have been dismissed for taking part in strikes seeking higher pay that turned violent, according to their union and dismissal notices.
Low-cost labor has attracted Western brands to the Southeast Asian country and garments now account for around 75 percent of its exports, but strikes over pay and working conditions have become common.
Thousands of workers at Sabrina (Cambodia) Garment Manufacturing Corp went on strike for higher pay from May 21.
On Tuesday, hundreds of them protested at a provincial court to demand the release of eight workers and unionists arrested on June 3, when around 4,000 workers forced their way into the factory, clashing with colleagues who had remained on the job.
A union grouping some of the workers at the plant said 288 workers had been fired on June 6 and 7. It says they were dismissed for going on strike.
"This is completely illegal," Free Trade Union President Chea Mony said of the dismissals, adding the company had only fired people who said they had witnessed violence by the authorities.
"The strikes are legal," he said, adding Sabrina had repeatedly refused to hold negotiations.
According to dismissal letters seen by Reuters, the workers were sacked for flouting labor law and the factory's internal rules during the protests on June 3 and on May 27, when strikers clashed with police outside the plant.
A Sabrina official declined to comment.
The workers want the company, which employs more than 5,000 people at the plant, to give them $14 a month to help pay for transport, rent and healthcare costs on top of their $74 minimum wage.
Many of the strikers have drifted back to work in recent days. According to trade unionists, less than 1,000 remain out.
The International Labour Organization (ILO) monitors pay and working conditions at many factories in Cambodia but strikes and sometimes violent protests have been on the rise as unions emboldened by a shortage of skilled workers push for higher wages and improved safety.
The number of strikes by the country's more than 300,000 garment workers nearly quadrupled last year to 134, according to the Garment Manufacturers Association of Cambodia, the main industry body. The 48 strikes so far this year are already more than in the whole of 2010 or 2011.
(Reporting by Prak Chan Thul; Editing by Alan Raybould)
Subscribe to Portside