Five years after Wall Street crashed the economy, not one banker has been prosecuted for the reckless and fraudulent practices that cost millions of Americans their jobs, threw our cities and schools into crisis, and left families and communities ravaged by a foreclosure crisis and epidemic of underwater mortgages. 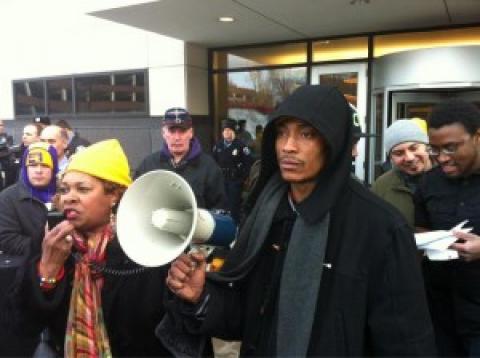 Over 500 supporters showed up to occupy the steps of the Justice Department and demand an end to "Too Big to Jail". As of now 27 struggling homeowners have been arrested.,Home Defenders League (http://www.homedefendersleague.org/justice-to-justice-week-of-action/)
Seven homeowners who have faced foreclosure by some of the nation's biggest banks after doing the best they could to save their homes faced a D.C. Superior Court judge Tuesday. They were in court for the act of civil disobedience their financial plight had driven them to commit: blocking the entrance to the law firm of Covington & Burling, which has among its clients some of the banks what have been trying to take their homes.
They are called the "Covington Seven," and they were among those participating with the Home Defenders League in its recent Week of Action to call attention to the failure of the Justice Department to hold the nation's largest banks accountable for the actions they took that led to the 2008 financial crash and millions of people losing their homes to foreclosure.
During the Home Defenders League's Week of Action, after 27 struggling homeowners and victims of Wall Street's gambling were arrested at the Department of Justice, these seven homeowners were arrested and charged with "unlawful entry" for blocking the entrances to Covington & Burling, a prestigious firm that represents big banks such as JPMorgan Chase and Bank of America. Both Attorney General Eric Holder and top prosecutor at the Department of Justice Criminal Division Lanny Breuer called the firm home before heading to top posts at the Department of Justice. Breuer has since headed back to Covington to defend the banks he neglected to prosecute. Breuer's salary next year? A cool $4 million.
The Covington Seven - Deborah Castillo, Liane Gale, Mildred Garrison-Obi, Sherry Hernandez, Cammy Depew, Deborah Annie Quain and Carolyn Barrett - are all women who have had their lives turned upside down by the mortgage crisis, and have found this is their last resort to shine a light on the practices that have put millions of Americans out of their homes and left many more struggling.
"I have tried every method to get help the way you are supposed to get help, and the only thing that anyone has done thus far to investigate is to contact the companies and ask what they are doing wrong. So the only way I can think of to bring attention to this is to come here," said Hernandez, who make the cross-country trek from Los Angeles to participate in the protests.
Castillo, of St. Louis, had a similar story. After building their own home, the Castillos were hit with the perfect storm of a slowing housing market, loss of income, and health problems, which required them to seek a modification of their mortgage. Their bank did not follow through, and the bills piled high before they came home to an eviction notice one afternoon.
Depew, of Gonzales, La., whom we interviewed earlier, lost her home after a shuffle between servicers left her perplexed as to who held her mortgage. When she tried to find out who held her loan, she never got a straight answer, and eventually got so far behind on her payments it was impossible to make up and her home was put in foreclosure.
These are the real stories of real people that were impacted by the housing crisis, who have lost their homes and are continuing to fight for them.
The charge the Covington Seven face is unlawful entry. Unlawful entry is characterized as a federal charge by the Covington Seven's attorney, with the misdemeanor carrying the maximum penalty of six months in jail and $1,250 in fines. The seven women are deciding which path to take on these charges. If they plead guilty or take it to a jury trial, the possibility exists of a conviction on their record, something that could follow them for the rest of their lives. They could also choose to enter a deferred prosecution agreement, by staying away from Covington & Burling for several months for the charges to get dismissed.
Unfortunately, given the revolving door between the Covington offices and the Department of Justice, it looks increasingly likely that the perpetrators of the economic crash are likely to make off like bandits, while those who were the victims are unlikely to return to the level of socioeconomic status that they held before the crash. These seven brave mothers and grandmothers are among the few willing to step up and call the Justice Department on its two-tiered justice system. This certainly is not the America that was dreamed of by our founding fathers.
The Covington Seven knew that their arrest was a potential outcome of their protests, yet stuck to their beliefs to draw attention to this crisis. The least we as Americans can do is to support them in their quest for justice. If you believe that the banks, rather than those that were victimized by their reckless gambling, should be prosecuted, take a minute to sign the Home Defenders League's petition to Eric Holder here.
Subscribe to Portside