The Civitas Institute is publicizing the names, residence, political registration, employers, and other details of those arrested at the ongoing NAACP-organized protests at the legislature. The project calls to mind how Southern Dixiecrats and opponents of civil rights once published the names of NAACP supporters in newspapers to encourage retaliation against them. 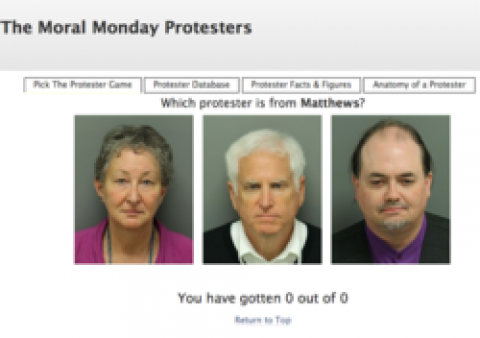 A screenshot of Civitas' "Pick the Protester Game.", Facing South - A New Voice for a Changing South

The John W. Pope Civitas Institute, a conservative think tank based in Raleigh, N.C., has launched a database targeting people who've been arrested as part of the Moral Monday nonviolent protests at the state legislature.

The Civitas Institute was founded by conservative mega-donor and discount-retail mogul Art Pope, now the North Carolina budget director under Republican Gov. Pat McCrory, and it was named for Pope's father. The nonprofit gets about 94 percent of its funding from the family foundation Pope chairs. That raises questions about the ethics of a public official who's been a target of the protests being involved in an apparent effort to target the protesters for harassment -- or worse.

"This is troubling from a group whose supporters include far right extremists in favor of loose regulation of gun ownership, among other things," Progress North Carolina, a liberal advocacy group, said in post on its Facebook page.

The Civitas database includes each protester's name, city and county of residence, sex, race, age, arrest date, occupation, employer (and whether it's in the public, private or nonprofit sector), interest group affiliations, and mugshot.

It also includes arrestees' voter registration information and whether there was a discrepancy between the address the person is registered at and the address they gave when arrested. A number of those discrepancies appear to involve students, who often register to vote at their parents' home while living elsewhere to attend school. Discrepancies can also occur when someone has moved since the last election but hasn't updated his or her registration.

The database offers infographics detailing demographic and political characteristics of those arrested. And it offers a "Pick the Protester Game" in which visitors to the database are shown three mugshots and asked a question about them, such as "Which protester is 55 years old?" or "Which protester is from Orange County?"

Civitas says the project aims to shine a light on the growing protest movement. "Recent media reports have suggested that the protesters disrupting the General Assembly at 'Moral Mondays' represent a cross-section of North Carolina citizens," according to a statement on its website. "We decided to investigate that claim. Using arrest records and other public documents, we investigated who really is involved in these protests -- the results may surprise you."

Nearly 500 people have been arrested since the ongoing protests, organized by the North Carolina chapter of the NAACP, began in late April. Those arrested have faced misdemeanor charges including trespassing and failure to disperse after gathering inside the legislature, singing and holding signs, and disobeying police orders to leave. Among those arrested was Chris Kromm, executive director of the Institute for Southern Studies, the nonprofit publisher of Facing South.

North Carolina's current legislature is controlled by a Republican supermajority that was elected with generous funding from Pope and his immediate family, and from outside spending groups supported by Pope and his business, the North Carolina-based Variety Wholesalers discount retail chain. The supermajority was also enabled by a controversial redistricting process that favored Republicans and packed minorities into majority-minority districts while diluting their power elsewhere, and to which Pope served as an advisor.

Republican leaders' response to the Moral Monday protests has at times evoked a painful chapter of Southern history. Speaking earlier this month to the state Republican Party convention in Charlotte, Gov. McCrory said the protests were the work of "outsiders" -- even though Civitas' own database shows that those arrested are overwhelmingly North Carolina residents. McCrory's remark calls to mind how former Alabama Gov. George Wallace, an ardent segregationist, blamed civil rights demonstrations in his state on the work of "outside agitators."

Civitas' database brings to mind another troubling episode of mid-20th century U.S. history: how in some Southern cities at that time the white-supremacist White Citizens' Councils (WCC) would publish in local newspapers the names of NAACP supporters and those who signed anti-segregation petitions in order to encourage retaliation against them. The WCCs, like Civitas, also had close ties to powerful government officials.

[Sue Sturgis is Editorial Director of the Institute for Southern Studies, and Co-Editor of Facing South.

Sue joined the Institute in November 2005 as director of the Institute's Gulf Coast Reconstruction Watch, a project to document and investigate the post-Katrina recovery. A former staff writer for the Raleigh News & Observer and Independent Weekly (Durham, N.C.). She is the author or co-author of five Institute reports, including Faith in the Gulf (Aug/Sept 2008), Hurricane Katrina and the Guiding Principles on Internal Displacement (January 2008) and Blueprint for Gulf Renewal (Aug/Sept 2007). Sue holds a Masters in Journalism from New York University.]

About Your Banging Blacklist: An Open Letter to the Civitas Institute

Thanks for including me in your Moral Monday Protesters database. I'm sure I speak for many of those arrested for civil disobedience protesting North Carolina's Tea Party legislature who are happy to find our name, residence, and employer are usefully listed on the Internet.

I'd like to thank your funder, Art Pope, for making this project possible and giving it that personal touch. Linking to our mug shots is a nice detail; otherwise, your readers might not be able to recognize us on the street. Also, it has that great Rogues' Gallery effect. I mean, everyone looks like a criminal in a mug shot.

You really enrich the picture by listing arrestees' "interest-group affiliations," such as NAACP, People of Faith Against the Death Penalty, and, of course, Occupy Raleigh. But maybe the best grace note is the column devoted to noting everyone whose driver's license address doesn't match their voter registration address. Could that mean rampant voter fraud? You report, we decide.

You've made some really solid aesthetic choices here. The dull, column-ruled, sans-serif layout that we have to click through ten names at a time, like we were turning the pages of a Registry of Deeds? So retro. It's like 1950s public record in a county courthouse. And that little throwback is so of the moment. I mean, hipsters are using "boss" to mean awesome and belting their corduroys high around their waists. Everything old is new again, with a little ironic twist.

And it's way more than aesthetics. The design choices set the mood for what you're really trying to communicate here: 1950s, blacklists, loyalty oaths, right? Am I feeling you?

Maybe it's just because I teach Constitutional Law, so I randomly know all these little Americana details, but this whole project is a really nice allusion to those laws Southern states passed in the 1950s, requiring certain groups, which just happened to be the NAACP and other civil-rights organizations, to disclose their membership. You know, so that employers and neighbors could be informed, make their views known to the troublemakers.

The Supreme Court, which was more of a buzzkill back then, struck down those laws under the First Amendment. But your list has nothing to do with the heavy hand of government. It's just civil society, some internet searches, and a little philanthropic funding -- from the same guy who has purchased himself the highest un-elected office in North Carolina and is calling the tune for the legislature. It's a nifty little public-private partnership. And it's not like you're actually saying anything, you know, mean about us. Just throwing the data out there, amping up the transparency. You report, we decide.

You didn't list any interest-group affiliations for me, so I thought I should fill out the profile a little. Your readers should definitely know that I volunteered at the Occupy Wall Street library back in 2011, that I have sometimes been active in the liberal American Constitution Society, and that I have read more of John Locke's writing, and more carefully, than most people who work at your Art Pope-funded sister Society, the John Locke Foundation. (Here's another crazy little detail: John Locke wrote a constitution for the Carolina Colony that included hereditary slavery and aristocratic landholding. I report, you decide.) And that one of my all-time favorite thinkers and writers is the ur-conservative Edmund Burke. I notice you haven't named any foundations after him, maybe because he was against tearing up the fabric of society to pursue abstract theories.

My religion is Other, and it's complicated, but you can just list me as agnostic. I enjoy trail-running, ultimate frisbee, cooking, and reading literary fiction, plus the occasional high-quality fantasy novel. (I lost a lot of sleep reading Game of Thrones.) Six things I couldn't live without: sunshine, avocados, running shoes, sleep, my friends and family, and contact lenses. My all-time best concert was seeing R.E.M., Robyn Hitchcock, and Billy Bragg together in a little theater when I was 16. I snuck in through the roof, and Billy sang "If you've got a blacklist, I wanna be on it." (Somehow that detail comes to mind.)

That's probably enough for now. Oh, except that I'll swear my loyalty to the Constitution, including freedom of association and assembly, anytime you want. I have a flag that goes back generations in my family: I'll take it out, and we can talk together about how Edmund Burke would see what's happening in North Carolina.

On second thought, come to the front door like a man. You know where I live.

[Jedediah Purdy is Professor of Law at Duke Law School, where he teaches constitutional and environmental law, among other topics. His writing includes a trilogy of books on American politics and culture, most recently A Tolerable Anarchy. He lives in Carrboro, North Carolina.]